Puttin' The Power Down 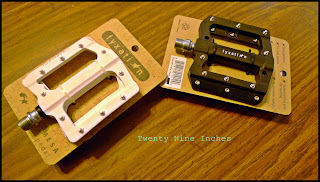 Pedals. A lot of times we don't give a lot of thought to them, but they are one of the most stressed parts on our bicycles. I mean, you'd hate to think what might happen if one failed, right?

And not only that, they are a contact point. We "feel" the trail, what the tires are doing, and how we balance the bike through these two components. Really, when you stop to think about it, the lowly pedal is a pretty dang important component.

Maybe we ought to give a little more thought to them.

Well, I will admit that most of my cycling life, I haven't given a second thought to it. Uh.....to pedals, that is. Well, lately, after getting a fat bike, I have thought a lot more about pedals, mostly because I was moving to doing something with flat pedals. You see, flats work with winter boots, clipless doesn't.

So I started out with just any ol' flats, because, well, they are just pedals, right? Bzzzzt! Wrong. I found out that some flats have little to no grip, some flats have some decent grip until snow packs up on them, and some flats made of metal can get snow frozen to them and become two ice lollipops real fast. 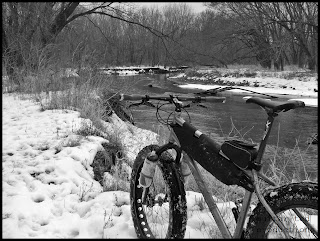 That made me go scrambling for more information. I found out some folks don't like metal pedals on their fat bikes because they make their feet cold. Some folks were after the thinnest pedals they could get. Some were after the best sealed bearings, and yet others were using cheapo pedals that seemed to work just fine.

I was getting along okay with some old, cheesy big and blocky Welgo flats and not so hot with some Atom Lab pedals I bought when Fyxation got a hold of me and wanted me to try out some of their pedals. I took a look and thought that they may be right up my alley for the fat bikes. Well, here they are, the Mesa and the Mesa MP. The pedals both feature high impact nylon bodies, "DU" bushings and sealed bearings on chromoly spindles, and the Mesa features molded in pins while the Mesa MP features metal pins.

I'll be sporting these now on both fat bikes and riding throughout the coming months to give everyone a review on these soon. (Probably over on Twenty Nine Inches) So far, I'll say that they are thinner by far than any of my other flats, they spin nicely, are big targets for my feet, and weigh a lot less than my old pedals did. I'll have more on these later though.

Never thought I'd have much to say about pedals, but in the last year, it sure has been a big topic of thought here in my mind.

Note: Fyxation sent these pedals for review at no charge. I am not being paid, nor bribed for this review and I'll strive to give my honest thoughts and opinions throughout.
Posted by Guitar Ted at 1:28 AM

Maybe, with non metal pedals it will be much better...

But, I ended up buyng Shimano MW80 clipless boots from the friend. Ridable from +10°C to -5°C with regular socks, and up to -15° with warm winter socks. Another friend bought Lake M302, says that they even warmer than MW80.

Problem with sole-freezing is gone, since there is almost no contact between sole and pedal.

@RGB Nameless: Ironically, Lake boots, which are getting a new distribution and have new owners, are really hard to find now. I happen to have a friend who is having warranty issues with a pair that isn't getting resolved due to this. Then you have Shimano shoes, yes, but they don't fit me. Very wide, and really, for my style of winter riding,clipless makes little sense.

To each their own on the clipless thing, but as far as the heat sink issue with metal pedals, that has been bubbling up as a concern for many winter riders. These Fyxation pedals should avoid that problem being that they are not metal bodied pedals.

You lucky duck! I've been looking at these for a few weeks now. I'd love to have a set of plastics with sealed bearings and replaceable pins for my Great Divide ride this summer and beyond. Unfortunately, I've got a set of cheap, heavy, aluminum Diamondback's with loose ball bearings that I've set up with grease zerks and I just can't kill 'em enough to justify pulling the trigger on a new set this close to my trip... :(

I've been using Northwave Celsius GTX shoes (with SPDs) for my cold-weather commutes, but they're only good down to around 15-20 F.

For flats, I've been relatively impressed (for the money - $6-10) with some by Avenir (Amazon link). I've used them on several bikes and they're solid and reasonably grippy (though not as grippy as the Fyxations probably are). It looks like cold weather's done for this year (what there was of it!), but if it gets down into the teens or single digits next year I'll try these on my commuter with my snow boots.

I've been using shimano half platform, half clipless on my Pugsley all winter with just regular MTB shoes and shoe covers. My solution to the heatsink issue was to make insoles from reflective bubble wrap. It creates a nice warm air layer between your foot and the cleat, then reflects some heat back toward your foot.