This is the Fargo (Gen I) that I've been riding since November 2008. There have been some variations on the theme, but essentially, this rig has seen little change in the almost four years I've had it around. 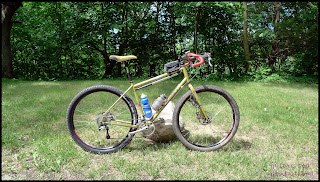 I have to say that for the most part, I was loathe to swap out anything major on this bike due to the fact that it fit me like a glove the way it was. Some how or another, when it was hurriedly assembled in November of 2008, the fellas responsible for piecing this together hit on a close fit for me, and when I popped on an On One Midge Bar a bit later, it was as if the bike had been custom designed for me.

The other thing that influenced that feeling was my Karate Monkey, which I had dialed in over a period of years previous to getting the Fargo and it was my "ruler" by which I measured all other fits by. I started tinkering around with the KM shortly after I received the Fargo and it has never been quite the same since. I didn't want that to happen with the Fargo.

I know, I know- measurements, yadda,yadda,yadda..... I can't say exactly why it is, but a certain mix of components just makes things "right", and swapping out something, even a minor thing, can really upset the "feel" of any bicycle for me. I should say, sometimes that works in the positive direction as well. 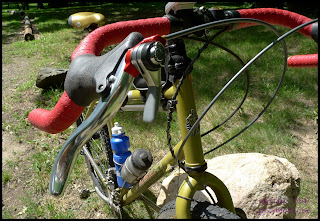 I had installed some Origin 8 Gary II Bars on this bike, and it was a step backwards in terms of the feel of the bike. Even certain wheel sets I've used have made the bike "feel" slower, more sluggish, and others have been great, for no apparent reason other than they were different.

Well, all that to say that putting on Retroshift levers/mounts was a risky proposition. Maybe they wouldn't "feel" right. Maybe I'd like them, but you never know unless you try. That and I'd have to re-cable the bike in the process, which hadn't been done since it was built. (About time for that, huh?) Thursday night I was frantically throwing parts at the Fargo and turning wrenches until at about midnight, I was done.

I would have to wait until morning to see how everything would turn out, but I had high hopes. I was missing this bike, and it has been in limbo ever since I broke it down for the old bar end shifters, which ironically were used to make the Retroshifter mounts work for the "Orange Crush". 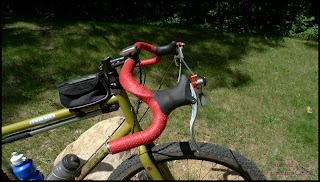 Oh.....and about these Retroshift levers: These are the newest versions, now becoming available, for use on that fancy-pants cross disc build you are thinking of for the upcoming cyclo-cross season. (You were thinking of that, weren't you?) The older version of the Retroshift lever/mount is a cantilever only design, (or you could run road BB-7's, I suppose). But if you have some BB-7 or BB-5 Avid mountain disc brakes, and want to use those on a frame up build, these newer levers will pull the correct amount of cable.

For me, I was happy to see the Goats at Retroshift decided to use the awesome Tektro RL-520 model levers as their base for the shifter mounts. These levers have a generous and comfy hood which makes for a nice place to leverage on climbs as well. Another cool feature is the contoured lever blade which really feels nice in the hand versus the original lever, which isn't bad. It's just that the RL-520 is about as perfect as it gets for an off road drop bar, in my opinion. 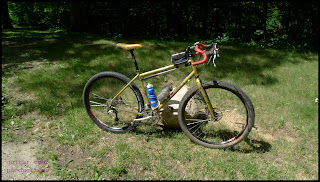 So, the ride to work and a detour for a longer loop home was the maiden voyage for the new set up. I really am going to like these shifters and the levers. Especially for how I am purposing this Fargo now. It is becoming my "gravel adventure machine". It isn't going to be the "go fast" option, but rather the "long, comfortable" option.

The Retroshift levers/mounts make for a fail-safe shifting option which can work indexed or friction style. The dead simplicity of the lever makes for a durable, reliable shifting mechanism, and for gritty, possibly muddy gravel rides, this will survive about anything I throw at it. Plus, for cruising on the hoods, you are right there ready to shift at a moments notice, which beats bar end shifters in the normal position.

Today is the 3GR, and I am using the bike for the ride. Should have a good first impression to write about after that, unless I get rained out, that is. Also, I should have a good feel for some other minor changes I am thinking of for the Fargo too. Stay tuned.....

Having admired that bike since day 1,"stay tuned...",I'm on the edge of me saddle,my freind!

Looks super. I would love a bike like this and will take a good look at the Kona Rove when it is available but it will have to be super good to beat out the tried and tested Fargo.