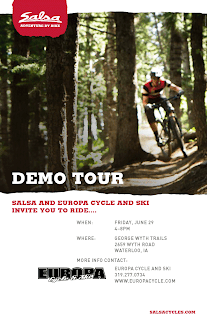 Just another reminder concerning the shop's having the Salsa Cycles Demo Tour come through the Waterloo/Cedar Falls area a week from today, June 29th. Details....

Bonus: There will be a mini-Fargo/Vaya Adventure Ride which will be led by me, Guitar Ted. It will go out from the demo truck and include some dirt, pavement, and back roads. The ride starts at 6:00pm sharp and should take about an hour and a half. Any cyclist is invited but you must sign a waiver and wear a helmet to join in.

Hope to have some good weather for this and to see many of you show up and test out these great bicycles. 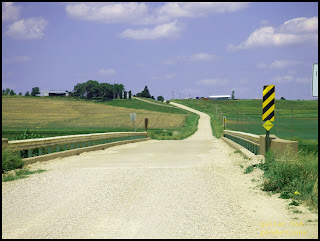 Well, I mentioned there was a strong possibility that 3GR would get moved to Saturday and that is the case. However; there is another major change specific to this week's ride.


Sturgis Falls Celebration is going on now in Cedar Falls, Iowa. That means thousands of folks all over the place. That complicates the parking/gathering for 3GR in the Gateway Park lot. So.......this week we're moving the ride!

If you are fortunate enough to be able to make this one, it's gonna be a doozy! I am going to have the 3GR start at the convenience store on HWY 63 in Traer, Iowa. That's right.......I am going to ride some serious hills this time around!

There will be a healthy dose of B Maintenance road as well, so if any of that appeals to your senses, head on down to Traer tomorrow morning and meet me at 8:30am on the south side of the BP convenience store. I'll be there and ready to ride, whether anyone else comes or not, but I hope that you do.

The route should be about 25 miles to 30 miles long. It'll start out relatively flat, but then the last half will kick in like a mule in the stall! The image above shows one possible hill we might ride on K Avenue, but we may ride the next one a mile westward which is even steeper, (and was featured in the trailer for the movie "300 Miles Of Gravel") Hope to see some of you there....

I was waiting on one final piece to the puzzle to get my Fargo V1 back together again. It finally arrived Wednesday, but I wasn't at work, so I found the Retroshift  levers when I got there yesterday.

These are new versions meant to run your linear pull, or Mountain BB-7 brakes, and are based on the excellent Tektro RL 520 model levers. (In fact, they are Tektro RL-520 levers with Retroshifts mods.) You'll notice the red anodization here. Retroshift is now offering colored bases on their levers, so you can kind of customize your look. I thought the red would be nice, but you'll see why when I post a full pic soon.

I've got the old girl back together now and I hope to ride it on the 3GR Saturday morning. It was kind of a bittersweet deal working on the bike, since much of what I removed was put there by myself, Jason Boucher, and Captain Bob one November night late at Jason's house. It was just before the first Fargo Adventure Ride, and what a weekend that was. I had fond memories welling up as I worked on the bike last night. Good times with lots of good folks.

In fact, I think that was the weekend I discovered Sriracha Hot Sauce. (Thanks Kid!)

Hope ya'all have a "hot" weekend doin' whatever it is ya'all do. Ride a bike. Take some pics!
Posted by Guitar Ted at 1:30 AM