You know, as long as I have been a "bike nerd" it has been kind of an unwritten rule that you (a) ride on News Year's Eve or (b) ride on New Year's Day. I didn't get out of the house at all on Wednesday, since we were all feeling under the weather here. However; I did manage to grind out a ride on New Year's Day, to uphold "traditions". This will keep me in good stead with the "Unwritten Rules Of Engagement For Bike Nerds". (There is no such thing, but you'd think so by following us "bike nerds" around.)

So, I stayed up pretty late on New Year's Eve doing the family deal. The children are old enough now where staying up until midnight is considered "novel" but they can actually hold out that long and stay awake these days. We watched the "Apple Dumpling Gang" and the Wallace & Gromit short, "A Grand Day Out". Then I stayed up a bit longer and toodled around before hitting the hay. That meant a very late start on Thursday- 11:00am or so, actually, and I took my normal lengthy time to get going. I wasn't out on the bike until well into the afternoon. 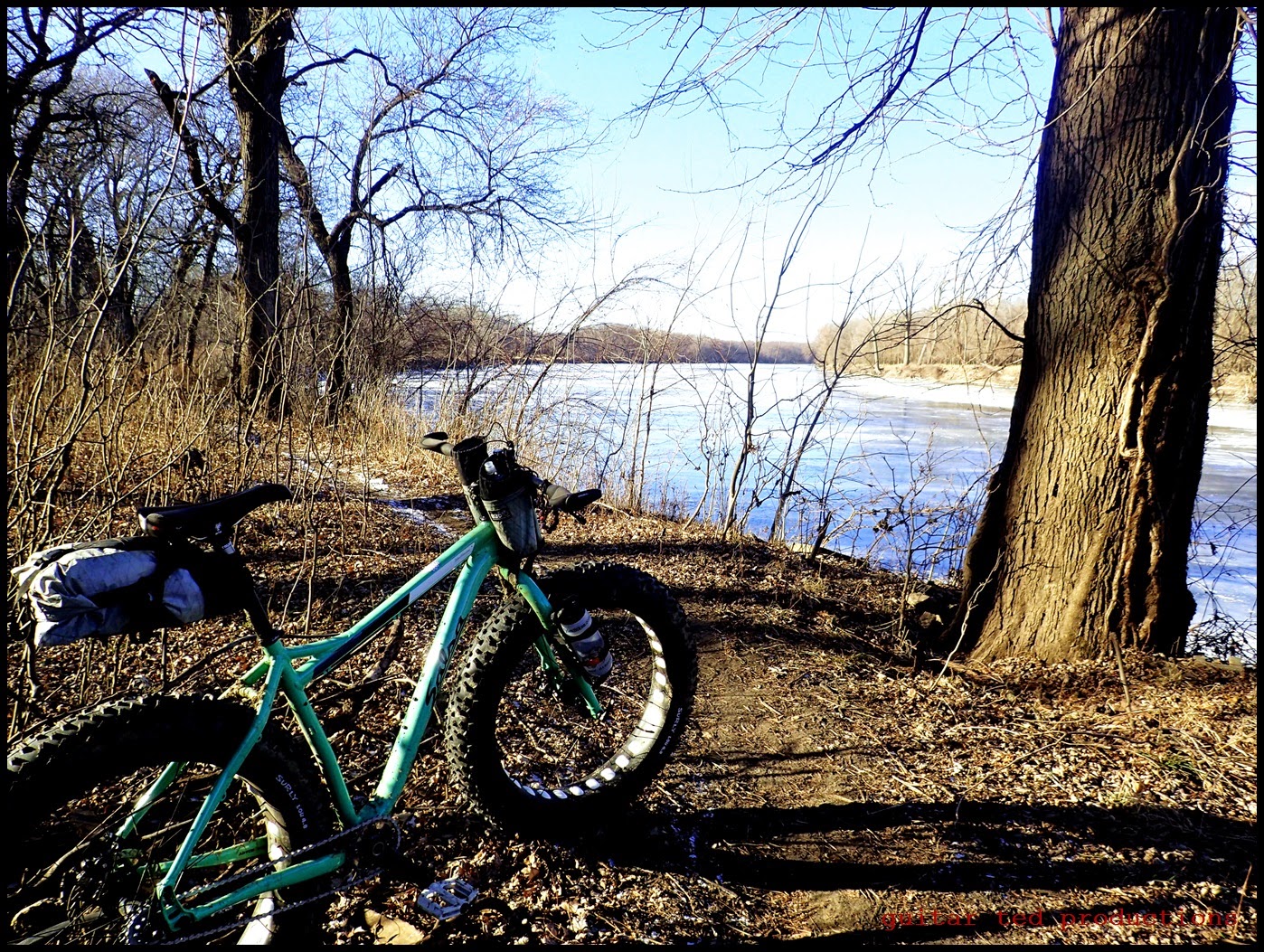 We're enjoying a brief respite from bitter cold so the temperatures weren't all that bad out for a New Year's Day ride. I have seen temperatures into the 50's on New Year's Day, but more often than not it is bitterly cold. Yesterday it was right around freezing with a stiff Westerly wind. Not bad, but considering the time of year, above average weather for sure.

I decided the theme of the ride would be an easy, steady pace. To spice it up a bit, I decided to ride the Blackborow DS, (or Snow Dog v2), and to not use the lower range gearing. I would keep it in the high range and truly single speed it- a "no DS ride". That really shouldn't be all that hard to do around here, but there were a few observations along the way where I felt dropping into the lower range would have been a good thing. We'll get to that in a bit.....

Not 20 feet from my front door I found a colorful bracelet on the sidewalk. A remnant from the previous evening's festivities, perhaps? Who knew? I took it as a token that my Snow Dog v2 needed a "mojo", and I laced it initially around the right side of the handlebar. What? You've never heard of a handlebar mojo before? Well, it goes way back to the early days of mountain biking when folks would affix all sorts of "talismans" to their handlebars for fun, good luck, or some other superstitious reason. Most commonly dubbed "mojos", the practice seemed to fall out of favor sometime in the 90's. I never really got into it all that much, although over time I have had such things as a silver strand of "temple bells", a plastic rose, and maybe some other oddments on my bars throughout the years. I wouldn't say I was superstitious by any stretch, but I maybe am a bit sentimental and I like doing the odd thing from time to time. The bracelet deal seemed appropriate, seeing as how it was the first found item on a bike ride in 2015, and me without a handlebar mojo on the Snow Dog v2 and all. So there it is.

I decided to not do the Green Belt again. That is an easy route to use, since it is so close to my home, but others are not much further away and I decided to visit a bit of a different stretch along the Cedar River instead. I made my way via city streets and alley ways to Lower Hartman Reserve and the new trails over that way. After a bit, I moved further West and hit the old trail I helped put in back in '97 or so. It was dubbed "John's Trail" back in the day, although I doubt many remember that John Adamson put that in there over what was mostly a deer trail. I helped him out with marking it and added a bit of an "optional" curve down off a ridge and back up again. That being the only noticeable contribution I made to that trail. I always dub that tiny diversion "Mark's Option". But again, nobody cares or even remembers that old stuff. To most, it's just one of the Lower Hartman trails. Which is fine by me, by the way. I just point that out for historical purposes, if anyone would care to know locally.

Another trail that probably no one realizes the history of is the one that parallels the old Shirey Way closer to the West entrance to Lower Hartman on the North side. It eventually rides up on a ridge that has a bit of exposure to the back water pond before it dumps out onto the old Shirey access road that goes back into the woods. That wasn't rideable until the mid-90's when some of us started clearing out a pretty significant deer trail that the current trail follows the line of. I remember bushwhacking my way through there on an old 26"er before we had it cleared out for use. By 1996 it was fairly well established. For a deer trail, it ain't all that bad.

The "no DS ride" went well, actually. I had to time some whoop-de-doos and obstacles a bit more carefully, but I only dabbed twice during the entire ride. I had to make some fancy moves in a couple of spots, but I think given more time to get more fittness on the bike, the old Snow Dog v2 will be fine as a straight up single speed rig around here. I was looking longingly at a few beach cruise opportunities, but I really would have needed the crawling gear for those, so I limited my self to sticking with the plan. I can always come back and crawl those nice looking stretches of sand again later.

The ride was great. The day was a clear, blue bird sky day, and although the winds were stiff, I was out of the main blast down in the woods for the most part. A good ride to kick off the new year on. Now let's see if the ball can be kept rolling.....

Maybe you oughta call it the Dog Snow for DS?

My New Years ride, began with new mtn bike friends I met on the trails in late 2014. Total strangers then. Now a good group. We rode trails I have not touched in 7 years , though they are only 5 miles from home. So in a sense , getting reacquainted with some old friends . A great start for my 2015 !

Handlebar mojos -- brings back the memories.

I had googly eyes glued to my cycling computer back in the day.

And excellent day for a ride. I was on my 29er single speed just across the river from you in George Wyth yesterday afternoon. Cheers!

My mojo is a very small stuffed camel I found laying along the road a number of years ago (right as I was really starting to get into the endurance thing). He's about 2" long and 2" tall, and is usually stuffed somewhere in a bag on one of my bikes for a bit of good luck.

I always remember someone saying that your bike mojo must not be something you pick out, but something that you find while out riding. A camel was too coincidental to not take as a bit of a karmic sign.