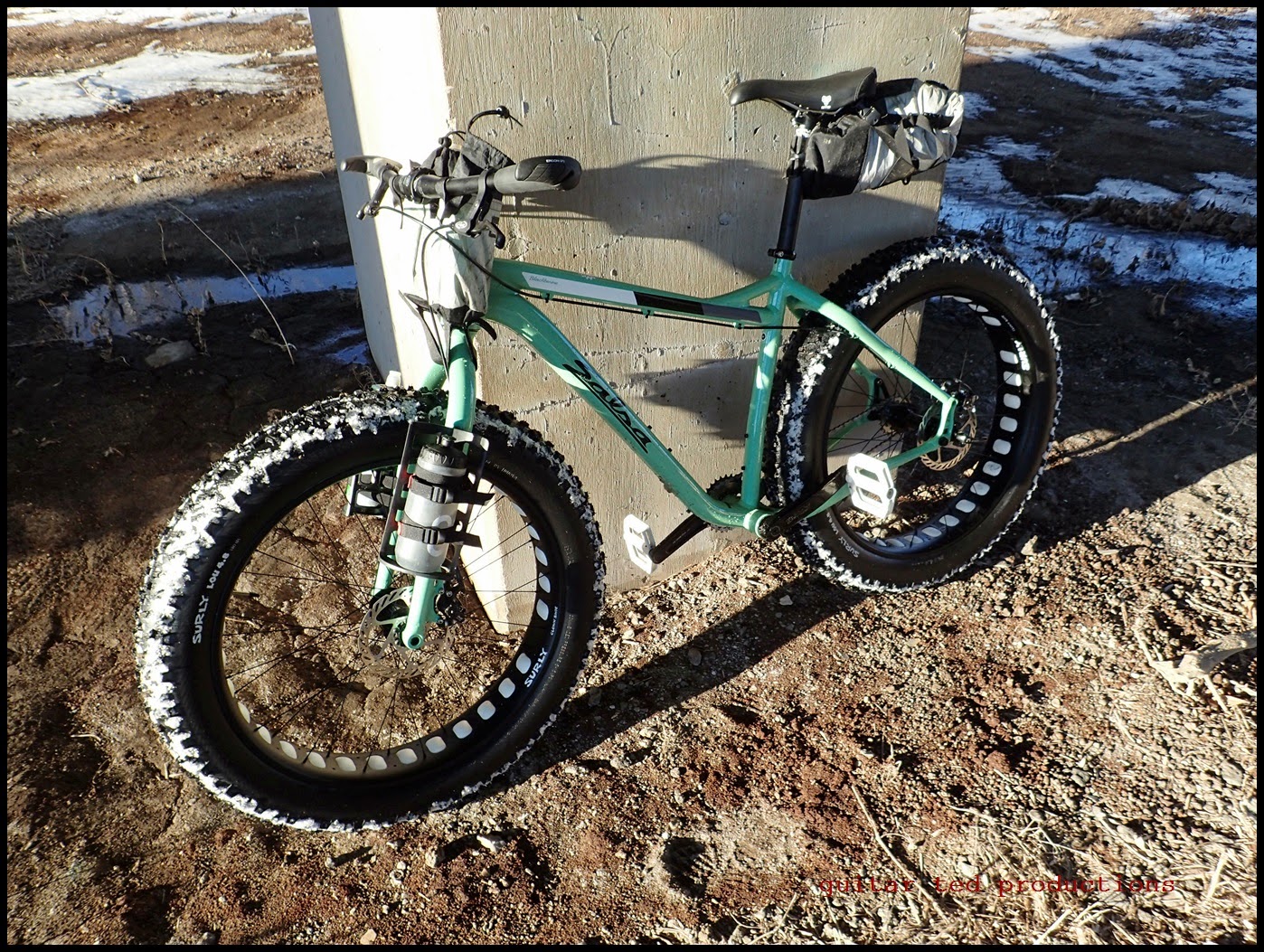 The Anything Cage HD is a new version of Salsa Cycles "rack" for front forks or down tubes that is designed to carry any "roundish" object. The initial review can be found HERE. There you will learn about the cage and my initial two week test period using the cages on my Salsa Cycles Blackborow DS.

I took note of a comment in the initial introduction on Salsa's site that claimed the Anything Cage idea was rubbish for water bottles or hard cylindrical objects. Claiming that one would have issues retaining such objects and removing/replacing those objects in a secure manner, the commenter was pointing to a soft side type alternative. While that is certainly a valid way to go, the claims of poor security and usefulness of the Anything Cage HD for water bottles or hard, cylindrical objects has been disproven in my experience since I have posted my initial review.

For the test I chose various vessels that had varying levels of rigidity. Stainless steel cylinders, hard plastic "insulated" bottles, and traditional water bottles for cycling were all used during this test. I even packed a water bottle in with some soft outer wear into a dry bag, making for a mixed soft/hard load, to test a "roundish" type load for good measure.

I'll admit that one of my reservations in using the Anything Cage HD was a possibility of not having the capability to carry water bottles along on the fork blades. For me, that has been a great way to get water off my back and on the bike, making for a less stressed body after a long day in the saddle. I assumed that if I could make the Anything Cage HD work with water bottles, I would lose the ability to grab a bottle on the go from the fork, but at least I could possibly have that amount of water to switch out to a place I could get at it on the run. I assumed an ability to quickly switch out bottles without unnecessarily undoing the straps and re-lacing them again. If that couldn't happen, I would deem the experiment a failure.

Happily I am able to report that one does not have to totally undo the strapping, if you use the technique I employed. This involves wrapping the Salsa Anything Cage strap twice around the cage, the fork blade, and your bottle, if you use a smaller standard sized bicycle water bottle. One of the claims against using straps like the Anything Cage Straps was that they would simply slide on the smoother vessels used for water and not tighten against them to secure them. This is not an issue at all if one knows how to tighten the strap with a quick flick of the wrist. Once the strap gets a bite on the vessel it can be further snugged up if you desire by tugging, as usual, on the end of the strap. A bonus if you have a typical bottle that features the indentation for an old fashioned cage to retain a water bottle is that you can place your upper strap there to gain further assurance that you won't eject the bottle on rough terrain.

It is also important to note that I did use the strapping going only once around the bottles. This did not affect the stability or use of the bottles with the Anything Cage HD, but the resulting extra strapping was annoying and could possibly get into your spokes while riding unless you secure them. Be careful with that!  Going around twice eliminated that possibility, and probably gave me a bit of extra purchase on my loads.


Verdict: While it is true that I cannot access the bottles in the Anything Cage HD on the fork blades while riding, I can easily slightly loosen the straps by flicking the buckle upward. This loosens the straps just enough to get the bottle out. A new bottle, or the one you just removed, can be inserted into the two loops of strapping formed by carrying the previous bottle and then by simply re-tightening the straps, you are good to go. You can even swap out bottles of different diameters fairly quickly and easily.

Security of bottles held in this manner is not a concern at all. I was not able to lose a bottle, even if I left the straps loose enough to remove a bottle by hand. They did move and "jump" up and down a bit though! Still, if I was careful to strap the bottle in tightly, it never came loose. Even after days of riding. I have total faith in the security of carrying water bottles in this manner with the Anything Cage HD, and it is easy to remove and replace bottles at will, as long as you are stopped while doing so.

By the way, that dry bag with a mixed hard/soft load? Not at all an issue to carry either. So, as a wrap up, there is no real disadvantage to using an Anything Cage HD as intended on a fork blade or down tube of a bike equipped with the requisite triple bosses. If you need to haul a roundish load, or hard side cylindrical objects, as long as they fit the cage reasonably well, you should have no problems getting your cargo safely to your destination.

The Anything Cage HD's came from Salsa Cycles at no charge and I will strive to use my honest thoughts and opinions about these products here and in the future.

How was the Cage attached to the fork? With bolts or with the straps? I expect the former.

In your opinion, could the Cage work on a fork with no thread?

@Adam Erritzøe: Yes- the Anything Cage HD is meant to be mounted on the Three Pack bosses which are on some Salsa forks and some Surly forks also support this standard.

You probably could strap the Anything Cage HD's onto a different fork. I have not tried it, so I cannot speak to the stability of such a set up, but I suppose it wouldn't be too much different than a Two Fish type set up, if you are at all familiar with how their system works. You'd need to do a bit of work to get it done though. that much I am sure of.