Trans Iowa v12: What This Event Is And Is Not

It occurred to me the other day that Trans Iowa, now in its 12th year, is old enough that maybe many finding out about it recently do not know or understand how it works, why it is set up the way that it is, and maybe do not understand why I do things the way that I do when it comes to how the event is set up to have zero support, no spectators, and no "hoopla".  So, consider this a "primer" on the event, if you will, good for a refresher to those who know the event, and a "Trans Iowa 101" for those new to this thing. By necessity, this may come off as brutal, and maybe too brief, but as the veterans of the event know, it is what it is.....

First off, you need to understand a few basics....

Here's a reminder of what Trans Iowa is.........We are informing you all that are in the event that if you don't agree that you are on your own, that you are responsible for yourself, and that this is being undertaken of your own volition, then don't take the start.

Read that and consider it carefully.

That means you are self-supported, there are no spectators, and no big deal at the finish line. Yep, I don't care if you don't like that, and the bottom line from my view is that I'd rather only have a handful of riders come to a Trans Iowa that "get that" than have 120 that don't. The reason why?

I don't charge for this event. I don't make money off it. It is not done for any benefit to me, or my family, beyond a personal satisfaction I get from providing an avenue for cyclists to realize they have the ability to overcome a challenge they thought they were not able to overcome previously. The challenge of Trans Iowa is all there is to it. This is why Trans Iowa doesn't have a cool finish line, or big fancy prizes, or things that won't amount to squat to anyone, including the riders, in 6 months, a year, or ten years from now. The Trans Iowa reward runs deeper than that. It means more than those "things".

Trans Iowa will never be the "greatest gravel grinder in the USA", or "The World's Premier Gravel Grinder", and Trans Iowa doesn't have merchandise for sale, promote itself as the most important of anything concerning gravel events, nor will it ever. Not that there is anything wrong with those things if your aim is to market yourself/your event and make money.

Trans Iowa isn't like "other events", although many of the gravel events that are well known now  once were like Trans Iowa. Trans Iowa has stayed doggedly close to its roots which were a mix of ideas drawn from the early mountain bike based ultra-endurance events and 24 hour mountain biking events. The whole point of Trans Iowa is that it is a challenge to overcome. It was never conceived as a way to turn a buck, gain fortune and fame, whatever that looks like to you, or to be popular amongst cyclists.


You Are Responsible For Yourself!
So, it comes down to you against a challenge. There are no "aid stations", no one to cheer you on, no hub-bub besides the camaraderie of fellow riders at the Pre-Race or along the way during the event.  We provide the cues to navigate public roads and bicycle trails, the framework of the challenge, and you do the rest. If there are any issues along the way, it is entirely up to you to overcome them, or not. If you decide it isn't going to work out, for any reason, it is on you to find your way out. This is why we stress that you need a "bail out plan", someone to help you when the challenge is too much, or things don't work out mechanically, health-wise, or for reasons outside of your control, (see last year's event).

The Golden Rule. The sponsors, organizers, and anyone having anything to do with this race are NOT responsible for your safety. Think of this race as a 300+ mile hard training ride with prizes. We can't say this enough.....YOU ARE RESPONSIBLE FOR YOU! 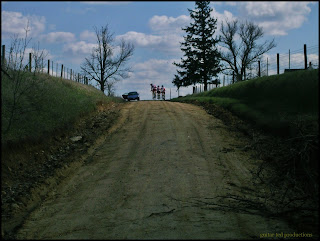 From the very beginning, a dozen years ago, this has been the #1 rule. I make rookies transcribe Rule #1 on post cards and the reason why is because unless riders understand this, internalize it, and abide by it, there will not be a Trans Iowa. The unsaid part is that, as a rider in Trans Iowa, you have to have the desire to not be a burden to anyone, or to the event. The riders need to be the enforcers of the rule, and the riders need to pull themselves out of the event when it is the right thing to do. Character and honor are highly prized at Trans Iowa. The winners are everyone that shows up to ride. The losers are the ones that cheat or push themselves too far and don't pull themselves out. It's a weird deal, and not how many events are done, but it is the way this one works.

The last thing I want to touch upon is how I have limited the number of folks that get in during any one version of Trans Iowa and how "getting in" is a hard thing to do. I feel it is a huge responsibility to keep Trans Iowa on the course that it has been on for over a decade now. It isn't an easy event to do, both from the production side and from the rider's side. It takes a tremendous amount of focus and energy from all involved to do this. The event's feel and function can only be maintained at a certain level. I feel, after running this for as long as I have, that we're at the limits of what riders and volunteers can handle, not to mention the towns we go through, and the roads we run on can also handle. If I did anything, I would make Trans Iowa smaller and even harder to get into in the future. And speaking of anything beyond Trans Iowa v12, well, I am not fielding any questions beyond this year's event. I've been asked about how to get into a future Trans Iowa one too many times already this year. You really don't want to get into Trans Iowa if you ask me about that now. Trust me....

Again, I don't expect a lot of people to understand this, or even like it. Frankly, I don't care if you do not agree with it. Like another famous event promoter said about the way he ran his events, "If the way I do things doesn't suit you, maybe this event is not for you."

Great post Mark! Thanks for all you I do, and keep on doing it for as long as you can. I'd love to make it out for yet another go one of these years... :)

Keep it up. Thanks fur running the event and thanks for keeping or something other than the other events out there. If people don't understand, let them ride other events. I, for one would love a shot at trans Iowa 13 or 14, but you do you. Thanks.

I would like to know who has been irritating you. Then I want to kick them in the nuts ;)