Wheels For The Standard Rando: Update 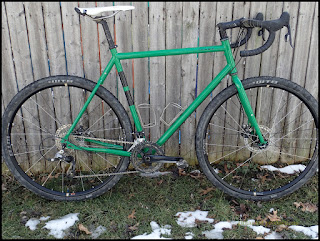 Okay folks, here it is, the Standard Rando is back up and running with my new wheel set. These are White Industries XMR hubs laced with Wheelsmith spokes and nipples to WTB KOM rims in the "i25" flavor.

I waffled for a time considering what color to get, but after seeing these on the bike I am glad I ended up choosing black. Twin Six made the scheme black and green, and I just feel that by even putting a white seat on it, I have went beyond the intended color palette for this rig.

There will be tweaking of parts. I have already said that I am not 100% in love with the saddle, and the stem may need to be a tad shorter. The levers need to be tweaked out as far as position goes. Small things like that. Nothing unusual. The main thing is that it is up and running and the wheels are set up with WTB Nano 40TCS tires, which is the first in what I hope to be a series of tires to be set up on these rims to see what effects can be derived by using a wider rim with 35mm to 40mm tires.

Of course, the WTB tires and rims are a dead ringer fit. That wasn't unexpected. I used Caffe Latex for sealant here, as that is being tested for RidingGravel.com as well. Everything else was WTB product though- rim strip, valve stems, and the aforementioned tires and rims.

So, the importatnt bit- just what did this do to the tires? I noted immediately that the Nano 40's didn't look over-stretched or too flat in profile. I was a bit concerned that the wider profile rim might flatten out the casing to the extent that all the tread was hitting the ground, which would have been quite a drag- literally. However; I didn't notice that at all. What I did see was that the bead of the tire seemed lined up more with the edge of the tread area. The sidewalls of the tire were arching from the rim to the tread area quite nicely, which kept the round-ish profile to the tread area intact. Good stuff!

I measured the tire at work and it came out to 42.11mm wide at the widest part of the casing. So, that makes these as big as Bruce Gordon Rock & Road tires on a narrower rim. I would venture to say that the Nano 40 has more volume to the casing as well. As a reference, the Nano 40's have measured out right at 40mm on a WTB Frequency i23 rim for me in the past, so a 2mm inner rim width dimension increase ended up yielding a 2mm+ width increase. I have also thought that the Nano 40's seemed "tall" in profile for their width, but this wider rim has rounded out the casing really nicely. We'll see how that affects ride quality soon.

I'm interested in what you have to say about the Nano's on those rims. I have the same tires mounted on HED Belgium+ rims but the i25's are a full 5mm or so wider internally.

Would love to see what some 40mm MSOs look like on those rims.

Wow - I can't believe what a nice profile the Nano 40s have on an i25 rim. They look really good. The width of a R&R but on a wider rim - what's not to like?

Just saw your comments on the MSO 36 tubeless, interested if you think they are worth $25/tire more than these Nano's. Looking for a replacement for my Ritchey Speedmax 32's and I don't want a big lumbering tire, but I kinda do... Any thoughts; I'm looking at Almanzo, Miesville 56, the Dirtbag and the Heck Epic this year. Also hoping to avoid blowing the tires off my Stan's Arch's rims at 45psi by choosing a legit tubeless tire

WTB tires and rims are built to the UST standard dimensions, so a TCS Nano40 will not fit a Stan's rim without MAJOR EFFORT and maybe not at all, depending on the age of your Arch rims. UST and Stan's are pretty much a no-fit. IF, however; you have the folding bead Nano40, that would fit Stan's rims, but WILL blow off at 45psi, which, by the way, your rims are NOT RATED TO for any tire. Stan's specifically calls out 40psi as being max on any of their mtb rim products.

So, while a Clement tire might fit okay, (and I've heard that they do quite well on an Iron Cross rim), you are limited to a max pressure of 40psi with an Arch rim by the manufacturer.

Thanks for the guidance, I do have the older ZTR Arch's (non EX that don't have the extra few mm of internal width) Don't know if that makes a difference on Nano's fitting easy or not. And by that do you mean really, really difficult to get over the edge of the rim, and once on they are on they are never coming off?

I had about a year of success with the Speedmax's when I kept the pressure dialed back, which is fine me (~30-40psi worked well). Recently lent the bike to a friend and he blew the rear off twice before I got it back and now I fear the tire has been compromised (I don't trust it without a tube anymore). One of those guys who insist on running 120psi on a road bike, just cause the sidewall says it can take it.

I've read the numbers on the Stan's rim regarding PSI's for different tire sizes, sounds like the new MSO running at ~35psi might be the surest bet.

@Jason Johnson-Yes. I mean as in "won't come off without cutting, or without steel levers" tightness.