Yesterday I felt sluggish, out of sorts, and just was not motivated to do a big gravel road ride. That and a weak system of showers kept me around the house until well past noon. Fortunately I had other things with which I could keep myself busy with. Then during the early afternoon I figured that I should go for a fat bike ride. I haven't done a proper fat bike ride since the snow was thick on the ground, It was about time to change that!

I had gotten the Blackborow DS out about a week or so ago and toodled around with my wife, so it was all cleaned up and ready to go. So I left and decided to go check out the Green Belt. I had no idea how many changes I would see, but changes were guaranteed. This is the Green Belt we are talking about here, after all. A place where change is constant and has been for as long as I can remember.

I didn't bother checking the air pressures in the tires, as they felt good enough and a little softer was going to be better since we had seen rain a few days ago and a light shower had passed through only a couple of hours before my ride. I figured that I was going to need flotation and traction, so erring on the soft side was going to be fine. In fact, the roll on pavement was only mildly annoying, so I knew then it wasn't too low after all.

There was change to witness right out of the gate. In the section between Fletcher and Ansborough I had to dodge a huge tree which had fallen, and right around that I came up on a kayaker. He was pinned up against the shore and I was maybe 7-8 feet behind his back when I popped out around the tree. He never knew I was there. Makes me wonder how many times I've been on the other end of a situation like this!

The next big change was when I came into the main part of the trail at the dog park. The entrance which was a beaten in path down the North side of the dike is gone. The construction folk graded and re-seeded it with grass. I almost missed it! Then where the trail juts out at the point where the dike makes a 90° turn by the ball diamonds there were trees missing, but the best part was when I turned to cross that feeder creek that they put a culvert over a few years back......

Well, there was a gaping hole in the trail, and that feeder creek was running just as it always used to, open to the air. I do not know how or why the culvert was removed, only that it is gone. I smiled broadly. Now this is old school! The way the Green Belt used to be. A bit of a back story about this particular point on the trail......

Along about 1990 or so, I had been riding a mountain bike through the Green Belt on a regular basis for a year, maybe a little more than that. I'd walked/hiked through here for several years prior to that. So, I knew the trail then quite well. This spot was a shallow dip that the "feeder creek" trickled over at times, but was mostly just an easy corner with a significant dip. As some may recall, the late 80's were severe drought years in this area, so water run off situations were rare. That all changed in 1990.

We had a few gully washers and after one particular hard, long rain, I went out on the trusty Mongoose Sycamore and was flying along. I was looking to make the corner here, but when I got there, water was running over the trail at this very spot. Okay, that had happened before and the water was maybe 6 inches deep at worst. However; after so many gully washers, the ground had eroded, and it was, in reality, as deep as you see it above in the image. The water level at that time covered everything you see there up to level with the trail. I had no idea what I was in for!

Well, I hit that corner with a head of steam, and the next thing I know I am face down in the mud. I had cleared the water, but my bike! I looked and it was gone! Then I could barely make out my saddle just under the surface of the rushing water. Ha! The entire bike was submerged and it had been sucked right out from underneath me. My forward motion carried me over the water. Crazy! So, there was a bit of a "fishing" for a bike after that, and ever since then that ditch has been there. 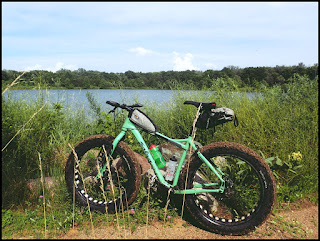 Well, I had to scramble down, hop over, and scramble back up the embankment, all the while using the Blackborow as a crutch. By the way, the mosquitoes are beastly out there right now! Anyway, I made my way on down the trail in a world of green occasionally broken by the odd flower or a patch of Sunlight which pointed back to the skies above.  I always figured that the name "Green Belt" was a name that this place alone had, not a common name for wild areas in urban confines. This place is so green in Summer it deserves to have its own claim to "green belt", I think, but it doesn't. It is definitely a jungle of plant life though!

I made it around to the lake with a couple more slight detours around fallen trees, stopping to toss off a few branches in the way, and hiking around two more really big downed trees with no work arounds to keep me on the bike. There were a lot of places with standing water, mud, and the usual helping of sand. The canopy of greenery was so thick it was a bit of a cold slap in the face when I got out to the lake and felt the cool breeze in the air.

I stopped to adjust my head set and I took a few images of some pretty yellow flowers as long as I was stopped. I also was trying to diagnose a creaking noise as I was riding. (You never stop being a mechanic), and I have it down to a set of worn out bearings in my flat pedals. I guess it is time to start looking for a suitable replacement set. I'll likely go with the Fixation Mesa MP pedals. Those have been stellar for me on my Ti Mukluk.

Well, that was a welcomed change of scenery, and I think I need to remind myself to mix it up a bit more. Too much of one thing is not a good thing. Variety is better. I needed that muddy, messy dirty ride more than I knew. It felt great, and afterward my attitude was better. Oh, I still was sluggish and tired, but I wasn't down in the dumps anymore.

That was a good thing.

I'm glad you think so highly of the Fyxation Mesa MP pedals because I just bought a pair. I put them on my Raleigh dinglespeed. This mornings commute was the first time I've used them. They seem to be a good balance between price and quality. I don't normally like plastic anything on my bikes but I chose this one on purpose because this bike gets ridden a lot in cold weather and I'm trying to eliminate the heat sink effect on my feet. My toes really suffer in anything under 40F, so maybe these will help.

Yellow plants mean danger!!!!Make sure that you know what wild parsnip looks like. It is bad news to anyone who even brushes against it. Might just save yourself some extreme unhappiness. I got into some of it three years ago, and now the hair on my legs will not grow back where it was!!!