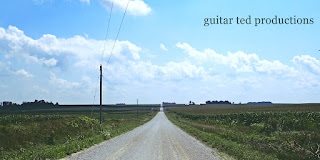 July kicked off with hot weather, the 4th of July celebration, and some fine gravel riding. I spent a lot of July just doing fun stuff, and there was some planning for a reprise of the first Guitar Ted Death Ride course to celebrate ten years of that event.

I actually got my fat bike out and did a few rides, just to change up things a bit. I did a few upgrades on my drive train for the Ti Muk, and I finished another fat bike build, this one for my son just in time for his birthday late in July. I went on rides with some important people too. My wife and my son being tops in that category. I hadn't gotten to ride with my wife in years, so that was a really big deal for me.

My son and I did a cool cruise of the local alleyways on fat bikes and another great ride in July was with Martin and was ostensibly a partial recon for the upcoming GTDRI. But really, it was a finishing of an idea I had for a couple years to go see if the bridge that was out for T.I.v10 had ever been replaced.

Then came the big ride. The GTDRI course wasn't all that tough, but it was really long. About 150 miles or so. However; the day was marred for me by a munchie I ate in Traer which didn't agree with me at all. I had stomach shutdown shortly afterward and managed to limp to a 110 mile day before bailing out on the guys. Everyone else did finish, but I had to wait for my wife to come over and bail me out.

Well, that ride made me take stock of my normal ways of fueling. I had known about some of the fueling strategies used by my friend Tony, and I decided that based upon my observations of him, I would give his plan a go. Gravel Worlds was coming in almost a month from the GTDRI, so I had a bit of time to check out how I might react to the different strategy.

There was also a Salsa Cycles demo in our area where I got to try out a few of the new 2017 rigs. That was a fun day, and it taught me a few things. I can see why some folks are swayed by the whole "carbon" thing, but I also can see why it might not be such a great idea too. At least for me.

Then there was Gravel Worlds. I had been here before and failed. Let's see....... four times? Yeah, I think it was at least four times before, going back to when the event was called the Good Life Gravel Adventure. This time was a different story.

After the success of Gravel Worlds I made another change. I got a proper cue card holder and more with the BarYak System and tried that out, which worked really well. Then it was time to gear up for some awesome Fall gravel weather and riding. The next big ride was the second Geezer Ride of the year which I held in the Cedar Falls-Waterloo area.

And with that I found myself coming into October staring down one more big challenge that my friend Tony and I decided we'd try out. A fat bike century.