It Is Not New And We Are Already Here

I realize that not everyone gets it. Hey, that's okay. But I am surprised by some things some sites and marketing wonks say about gravel grinding, gravel road races, or just your general purpose type rides on unpaved surfaces. I am finding it ironic because these few folks and sites think that this is new. That this gravel riding is "an emerging category in cycling", as one site I saw yesterday puts it.

There is no reason for this sort of attitude or statement anymore in 2017. Look, categories for gravel tires, bicycles, and more have been established by bicycle companies for several years now. Bicycle companies don't make a habit of saying a market is an "emerging form of cycling" in 2017 that have already been around for years, ya know? I know it seems stupid to point out the obvious, but I think that some of this stuff I am reading is so self-serving it deserves to be exposed for what it is. Lazy marketing that doesn't tell the truth. In fact, I'd go so far as to say that if anyone thinks this is new, an "up and coming" genre' of cycling, or anything of the sort, maybe doesn't quite understand what it is they are trying to portray. Yes, they don't get it.

Which, is in itself, a bit of irony. See, for many years in the 00's, I was being told that I didn't get it. Gravel riding wasn't anything new and specific bicycles and tires for gravel riding weren't necessary at all. Basically, I was told then that people had been "gravel grinding" for years and that it was no big deal. Now, apparently, the tune has changed.

What I said then was that specificity in cycling "tools" wasn't anything new either, and why shouldn't there be specific tools for gravel road riding. To be perfectly honest, I was really only ever thinking that perhaps I and a few nut cases around my circle of friends and acquaintances would ever want or need such "tools". Getting a tire or two and a bicycle made for this pursuit was all I figured would ever happen. Then the lid blew off the thing in the late 00's and the numbers were becoming big enough that cycling companies took notice. You know the rest of the story. 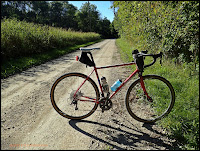 Then there are the events themselves, which I keep track of, and have been since 2008 in an "official" sense, but it has been 10 years since I first started searching for more events like Trans Iowa, Almanzo 100, Dirty Kanza, and Barry-Roubaix. There weren't many back then, and it was an easy job to stay on top of the two dozen or so events I turned up or was told about. Now, this "emerging category of cycling" has over 400 events to keep tabs on worldwide. Working the beat on RidingGravel.com is a constant job in progress when it comes to keeping tabs on all of this stuff. I used to do the calendar in one sitting- knock it out in a couple of hours or maybe two nights. No more.

Some of these events draw thousands of riders. Many in the several hundreds of riders. Do you suppose all these folks just found out about this? I know, I know...... I'm being a smart aleck about this, but c'mon! Don't come around with your, this is something new messages and expect me to not poke the badger. I'm not going to let that fly around here.

In my area, Chicagoland, there is a lot of established road groups that have members trying something "alternative" as Dk or b roubaix. They truly are just discovering this type of riding. This,however, will not change their main focus which is crit and road racing.

@Ari- Yeah there will be people just learning about track racing, cyclo cross, and .......road crits (!) this year too. Happens all the time.

I'm not at issue with that. It is the media and marketing folk that push this story line that (insert name) is NEW! You need to check out what we have to tell you about this "NEW" form of cycling you've never heard about. They realize that if you already know about it you won't look and likely will never comment or bother to call them out on what is at best a ruse to take advantage of unsuspecting, ill-informed people.