Fixing What Ya Broke

Last October I went up to Northfield Minnesota and had an awesome time at the Fargo Reunion Ride. Well, I don;t know if I ever mentioned it here, but I done broke something on my Fargo that night. As I endoed off the front of my bike, I clipped the wing units of my Bar Yak System and broke them both in the process. Essentially, I ripped the fastener holes on the corner of both the left side and right side with only one fastener holding each wing on. Obviously, that wasn't going to fly for the ride the next day so I removed those bits and made do without them.

Of course, I had only really ever used the dang things once and that was on my Fat Bike Century Ride earlier in the month of October last year. I was a bit put out after the Fargo Reunion Ride when I let it sink in that the wing units were basically unusable in the state I caused them to be in during my alcohol fueled crashing. A plan of redemption had to be formulated that would not only repair the wing units, but make them better.

Of course,with Winter coming on and everything coming to a head before the air was just to cold to be cruising the gravel on happened, I put the project on the back burner. I had some RidingGravel.com stuff to attend to and more. The holidays came and went, and now I have some time to put a plan of action together to salvage the wing units.

The plan was to fashion some sort of small metal reinforcing plates that would be far more difficult to rip through than the basic foam/carbon layer that the wing units are made of. I guess in one way the "break-away" nature of the wing mounting plates is smart. Had the system been done how I am envisioning it, I may have a bit more bruising than I had. But at any rate, now I had to do something or I'd have nothing. Essentially, there were two 3-4mm holes drilled through the base plate at the corners and you attach those base plates with two 5mm Allen bolts. That screws into your Bar Yak extensions, which are pretty burly aluminum arms. The weakest link is that foam/carbon layer bit that the arm rests are attached to. Laying up some thin aluminum plate on both the top and bottom sides, drilled for the fasteners, should do the trick here. 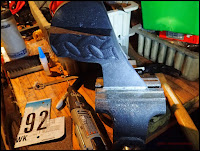 I thought a while about what I could use when it dawned on me that I had a bit of aluminum license plate material laying around. Once I located that, the project took off. I fashioned two plates just wide enough to cover the needs for the job. I had to trim them up with my Dremel tool and final smoothing up and rounding off of burrs was done using a file. then I roughed up the mating surfaces with some coarse sand paper in preparation for gluing.

I laid on a thin bead of Gorilla Glue and clamped that in my vice for extra pressure. I have a couple pilot holes for the fasteners already drilled, but those will get enlarged to their final size once I have both plates on there and out of the vice. That'll be one side done. Then I have to get the other side going.

If it works- hey! That would be just great, but if it doesn't, well then I guess I will have to pay for another pair of new ones. Lesson learned! Don't break yer stuff!