Saturday I had a window of time to sneak in a bit of a fat bike ride in the Green Belt. It had been quite a while since I had ridden back there due to being sick for two weeks. In the meantime it had flooded, frozen, and flooded again. It had snowed, rained, and snowed again. Sub-freezing temperatures insured that I should have no issues with mud or water, but I didn't know what the Green Belt would be like after all of the changes in weather and water levels.

I decided to roll with the Blackborow DS. I had it in "high" range to start out, but after I got off the pavement I stopped and switched to "Low" range for the duration of the ride. Good thing too.

It didn't take long to find the trail littered with river ice broken up and laying like broken bits of pottery all over. Big bits of pottery! Riding on them was a bit sketchy since they would tilt and shift in ways that eventually made me get off and walk for safety's sake. There was no way around these chunks of ice, so I had to gingerly step across the debris field and remount on the further side once I got there.

Then onward to the bridge across the Black Hawk via the steep climb up from the recycling bins. I was put to the test, but I managed to clean that climb to Ansborough. Then I stopped to calm down the heart rate! Once calmed down, I amused some drivers by hopping the curbs and snow piles to the other side. It seems fat bikes are still capable of attracting attention despite their being much more numerous in the area now days.

The Green Belt is a flooded out mess right now, but due to the sub-freezing temperatures, it is passable. As soon as the temperatures get above freezing for an extended period of time though, things will quickly become a quagmire and impassable by cyclist or pedestrian. I was glad I took the chance to get out there. Monday things are forecast to swing back above freezing far enough that the beauty of the white covered desolation will be lost, I am afraid, even if you could still get back in there to ride.

The ride was fine with little fanfare. I just had to keep aware of where the trail was snow versus ice. Keeping my tires on the snow meant traction. Avoidance maneuvers were executed aplenty. Ice chunks from the river were seen, but not to the extent that they became an obstacle you couldn't ride over. In fact, one other fat biker and one skinny tire mountain biker had been through here ahead of me. I used their lines to gain the best way up and over the ice in several places.

When I reached the turn off for the lake loop I veered left and back up away from the creek and all the frozen ice puddles on the trail. It appeared that there had been many hikers along the trail here, and maybe a snow shoe or two, but no bicycles as far as I could tell. No more ice chunks either. Just crunchy snow under the tires and silence otherwise. It was really beautiful. There was a lone ice fisherman on the lake and when he heard my tires crunching on the icy snow he turned to look and I gave him a friendly wave which he returned in kind. 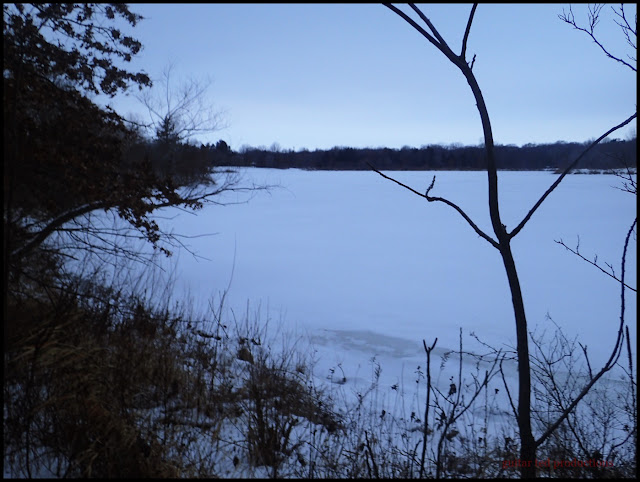 With all the crawling around ice patches and river ice, I was not making great time. It wasn't about going fast though. I was having fun, stopping to take in the beauty where I found it, and just enjoying being outdoors again after all the time off the bike. It got darker, so I stopped and fired up the light to help me see. I made my way around the lake as the lone ice fisherman decided to call it a day. We exchanged hellos again in the parking lot where his eyes grew wide at the sight of the Blackborow's enormous tires. I bet he talked about that afterward to his friends....

I decided to take the bike trail home. I didn't come back North very far from Martin Road when I saw the remains of a deer right in the middle of the trail. A cruel reminder of the realities of nature, or maybe it was a left over from misguided hunters? Who knows. I saw no signs of blood anywhere, so maybe it was drug up out of the woods by dogs. In any case, it was a sight to behold in the wan light of the evening.

After that I pushed onward to find my home in the dark. The lights were on and my wife and son had just returned from the grocery store. Back to civilization!

I enjoy riding in Winter on fat bikes. I am sure glad we have that choice these days as I have always wanted to enjoy riding in Winter, but couldn't. Not with the limitations mountain bikes had up until the fat bike came around. That didn't stop me from trying, of course, and I recall thinking that a fat bike would really be great. I just never did get a Pugsley due to the fact that you had to build it up from scratch and that wasn't a very cost effective way to do things for a bike that, at the time, I thought had limited usage opportunities. Little did I understand that fat bikes were far more than just "snow bikes".

But I am glad that they are that too!
Posted by Guitar Ted at 1:30 AM