The Almanzo 100, probably one of the most classic of gravel road events, was held again this past weekend up in Spring Valley, Minnesota. The 11th running of this event was marked by some brutal conditions. My son, Jacob, and I were up to help with the RidingGravel.com Cherry Grove Checkpoint. This is the tale of the day as I saw it....

Our trip was arranged so that we could ride up and back again with my friend Marty in his Ford Flex. Marty picked us up at 7:00am and we hightailed it up North, raining and blowing all the way. Marty had an intrepid attitude going in to this event and he seemed to be well prepared for the day. He dumped us off in Cherry Grove at about 8:30 am and headed off to find his starting spot in the event.

We were left in the forlorn looking town made even more dreary by the cold, wind driven rain which was slashing down and drowning everything in a heat sucking, watery curse. Only the robins seemed pleased as they hopped about, joyfully chirping as they pulled doomed earthworms out of the water-logged ground. Whomever showed up for this Almanzo was in for a brutal day, that was for sure.

Jacob and I shivered and milled about as best we could, trying to stay warm and engaged with each other. Actually, with the sub-40 degree temperatures, the wet air, and the strong winds, I was already going in to the throes of hypothermia after only being there about an hour. My chest ached and I tried to do some exercises to get the blood pumping again. Fortunately, after a little over an hour, Ben and Matt showed up with all the supplies and we set about to getting the checkpoint operable.

We set about to getting some shelter up first of all. It  was a pop up tent given to Ben to use by Surly Brewing. The work was welcomed by Jacob and I and it helped to warm me right up. I think had I had to stand out there much longer I might have been in trouble. The work went fast with many hands. We were joined in our efforts by Troy from the USECF Gravel Nationals (If you haven't heard of Gravel Nationals, I recommend listening to this podcast) Matt and Ben also helped a lot to get the checkpoint looking like something within a short period of time. Matt kicked right in to frying bacon and my son assisted him in that task. Meanwhile, Ben and I got a fire going in a borrowed fire pit that Ben had secured from the local hardware store owner in Spring Valley. Not long afterward, the man from Cherry Grove in charge of taking care of the community center stopped by and opened up the place which had heat and a clean, dry place to sit. Now we were ready for the first riders.

Suddenly a call went up that there was a rider spotted. He was all alone and looked a little unhappy, but who wouldn't be in those conditions? Anyway, it was quite a few minutes before we saw another pair, then quite a few minutes more before we saw another lone rider. Finally, we had about seven go through within about an hour or so of each other, then nothing for a long time.

Meanwhile we went in to the community center, which was a country school from the 1880's to 1954, and warmed up by the gas furnace. We "cooked" our wet clothes on top, just like we used to do back when I was a kid at many of my relative's country homes when we would get wet playing in the snow as kids. 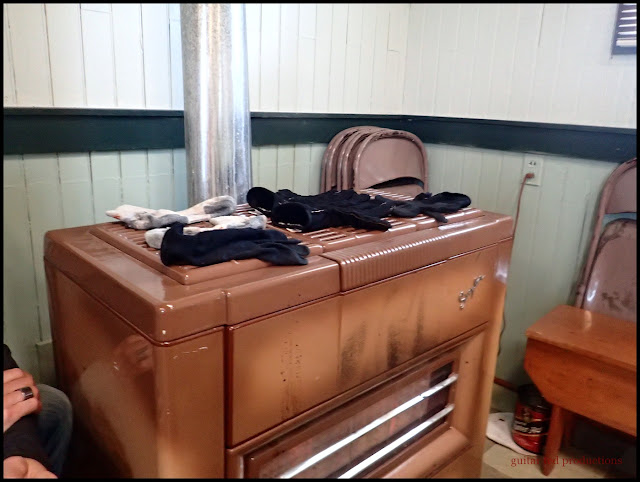 We noted a Sprinter van which pulled up, set out a big, blue tarp, and had a dog cavorting about. It was Audrey Wiedemier and Sam Cohen who were helping support some folks, I believe, on the Almanzo. Anyway, Audrey has a touring business going where she takes folks on short, mixed gravel and pavement routes to farms where the idea is to get local produce and meats to eat. I probably have some of that wrong, but maybe someone could comment on this post and set me straight?

Anyway, Audrey and Sam had tea and were very gracious to anyone who ducked under their blue tarp for shelter. And we needed all the shelter we could get. It blew hard and rained a lot most of the day.

We were told by Pat Sorensen of Penn Cycles that "everybody is dropping out..." and while we didn't know exactly what that meant, we had only seen about 15 cyclists by 3:00pm! However; a slug of bikers were spotted, and then a slow trickle of wet, weary cyclists were coming by in ones and twos until probably around 5:30 or so. By that time we were seeing a few of the Royal 162 riders, of which there were only seven or so left of that started the event. One of them, the leader, Greg Gleason, went steaming by on his distinctive Salsa Cycles Cutthroat. He looked really strong.

I was told by Joel Raygor that Ben Mullin, who was in Trans Iowa v13 this year, had a "special gift" which he was carrying for me and that I should wait for him to reach Cherry Grove. By this point, Marty, who had abandoned in Preston, was there waiting with our ride back to Waterloo. It was a great thing that Marty was so amenable to the idea of waiting around a bit longer. Thanks Marty!! In fact, Marty ended up giving a local to us rider a hitch back to the starting line. So, it all worked out.

Ben eventually rolled in with a few other riders and proceeded to dislodge six cans of craft beer which he had hauled around the Royal course to give to me along with a movie pass for my wife. What a guy! Don't try this at home kids, because hauling around all that extra weight in those conditions was a handicap Ben didn't need. That was super awesome of him to do and I won't soon forget about that.

Well, a few more riders came around after that, but according to the report we had from Joel Raygor, the last of the riders were to arrive very soon. I have no hard numbers on how many folks went by us. I lost track at 25-30, but I would be very surprised if more than 75 riders passed us at Cherry Grove. (NOTE: Initial Almanzo tabulations show 110. I find that hard to fathom myself.) It was a very difficult day, and many made a wiser decision for themselves and pulled out after shorter rides, or decided not to come at all. Ben Welnak, who was at the start, said maybe 300 folks were in Spring Valley to start the event Saturday. So, obviously this unseasonably cold, wet, windy weather has had a big effect upon the turnout and the finishing numbers.

Martin took us home and we arrived shortly before sunset. Probably about a ten hour day of exposure for myself and my son, but we had a blast and we hope that our "gravel family" had a good time despite the conditions. I look forward to seeing many of you again and more at the Dirty Kanza 200 in a couple of weeks from now. Hopefully the nasty weather will leave us alone!

Thank You: To Ben Welnak and Matt McCauley of RidingGravel.com, to Troy of the USECF Gravel Worlds, Penn Cycles, The Spring Valley Tourism Board, The Cherry Grove Community Center, Surly Brewing Company, and especially to all of the outstanding Almanzo riders. Thanks to all that came to hang out with us at the checkpoint. It was wonderful to have been with you all. #gravelfamily Finally- A big Thank You to Martin Bunge for the transportation and great conversation.
Posted by Guitar Ted at 1:30 AM

It was a rough one alright. Thanks to you and everyone involved for your support and coffee. It was awesome getting some words of encouragement from Jacob. Please give him a special "thanks" from me.

@Dave- I'll make sure he gets that message. Thank you!

Amazing! That looks like another tough day out on the gravels. Good job Jacob!
Ari

Sorry it took me so long to get there. I'm glad you were still there but would totally have understood if you had taken off. Standing around all day in that kind of weather is way worse than riding in it. The beer wouldn't have left Cherry Grove either way. I'd have slammed one and shared the rest around!

Thanks to Marty and Jacob for hanging around too.

It was a "good" day on bikes for sure.