Trans Iowa V13: A Descent Into A Cold, Watery Hell

MG and I are sitting in the Subaru waiting. Waiting on Dan Hughes, who has been leading Greg Gleason for quite a while now. Walter Zitz had been part of the original three up group but he punctured and was now back with Matt Acker and Jackson Hinde. These five were the pointy end of T.I.v13 and had been since pretty much the beginning, but it was becoming apparent that Dan Hughes was setting himself up for a win or for a huge failure. Which it would be was anyone's guess. We'd heard from sources out on the course that Greg Gleason was saying that he was running a set up he was hoping to use during Tour Divide. It was heavier than Hughes' set up, so Greg was saying that was why he could not keep pace with him on the climbs, which at this point were steep.

In the meantime, we were sitting by this marsh and the Level B Road which was likely the cause for many folks demise as far as continuing on in Trans Iowa past Checkpoint #2. It wasn't so much that this Level B slowed folks down, (it did) as much as it was that there were deeper holes in it filled with water. Once riders got their feet wet, it was mostly game over. 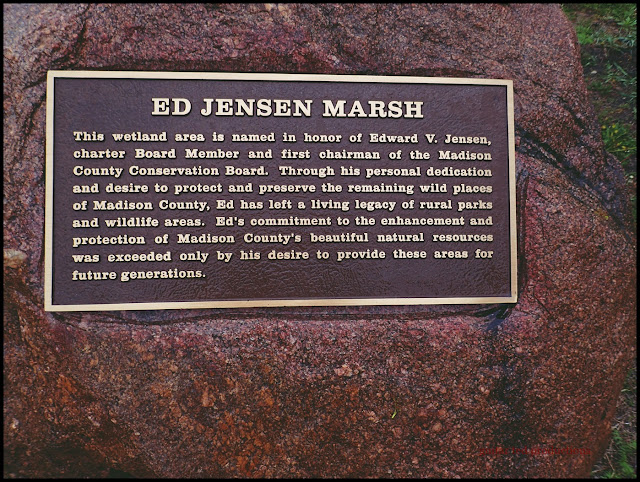 At the time when we were there the rain began to lighten up, the winds died down to a breeze, and it was relatively calm. MG and I weren't alone the entire time. Three small boys were seen adventuring in the brush, flashing big Bowie style knives. At one point we conversed with them and told them about the "bicycle race" that was due to come by their home, which was adjacent to the small lot we were parked in. Sometime after that we saw a crusty old Dodge 4X4 take a run through the muddy Level B road. I was certain he would get stuck, but MG kept an eye on him, and reported he made it, albeit with a lot of difficulty. Our volunteers Tony and Mike also had arrived there. During this time we also saw flashes of lightning and heard the growl of thunder far off. Thankfully we were not affected by that.

This section of the course was 15 miles from Checkpoint #2. We weren't due to show up there till around 5:00pm, so we were hanging out here to see when we might get sight of Dan Hughes. It was reported to us that Greg Gleason was about 11 miles from us at 3:45pm, and Dan had a sizeable lead on him, so we figured it wouldn't be long. It wasn't long either......

At 4:02pm a black clad figure on a mud splattered bike rolled up and dismounted. Dan looked tired, but he was resolved and didn't stick around to chat. He politely bade us farewell and then proceeded to pick his way along the muddy, water soaked road, if you can call that slot of sodden Earth a road.

We packed it in and took off the long way around on drier roads and endeavored to find Checkpoint #2. Finding routes is a game that I love, but route finding on the fly isn't a good time, especially when one is in a hurry.

We found the Checkpoint and it was manned and ready to go. Volunteers Steve Fuller, Dan Buettner and his young daughter were all ready to receive anyone who could make the 193 miles it took to get there before 11:00pm. We knew that the first rider would be Dan Hughes, but how long would it take him to get there?

Our answer came in at just over an hour and a half. At 5:39pm the same black clad figure we had seen before rolled gingerly across the County Highway and into the parking lot of the Great Western Trail next to the Cumming Tap. Dan labored to dismount and then made his way into the Tap for some food, drink, and refreshment. As he went in his plan seemed to be to wait up for Gleason and leave with him to make going against the wind easier. In one of the better exchanges I had during the event with a rider, Dan, upon receiving his last set of cues, asked me, "So, I suppose the last 140 miles is all headwind." To which I replied, "Yeah. Pretty much." His head sank at my words, but his resolve was steeled against whatever the coming night might bring.

As Dan sat himself down to a Tombstone pizza and a tall glass of beer, I was able to chat with my friend Sam who was there. I also had a chat with a few other folks. MG sat down and had a brief talk with Dan before he decided at last to strike out on his own. As he left, he called out to us to, "tell the other riders that I left a $100.00 bar tab for them." Steve asked if it was real, or was he just saying that. As Dan crossed the road, he called back, "Just sayin'!" Then he stabbed his pedals and he was gone down the road.

Not more than 15 minutes later we got a call from Greg Gleason because he was concerned about the entrance to the bike trail being unmarked. I got off the phone and asked Tony and Mike about it. MG and I had seen the flags, but perhaps someone pulled them up? We waited as Tony and Mike drove off to investigate. It turned out that Greg was lost a bit and was actually going backward down the course. Once he was pointed in the right direction Mike and Tony left him and about 15 minutes after they got back in the truck Gleason arrived at CP#2. On his heels were the trio of Zitz, Hinde, and Acker. MG and I left then to track down Hughes and continue onward toward the finish of T.I.v13.

Next: Sheets Of Rain
Posted by Guitar Ted at 1:30 AM