Trans Iowa events start for me on the Friday morning before the riders take the start. This year I loaded up most of the prizing in to my friend Tony's Ford truck on Thursday. Then Friday I took my personal items and the t-shirts along with me to recon the first almost 100 miles of the T.I.v13 course. Since the course left Grinnell heading West, I went out West to a point where I could drive the course backward to Grinnell. That way I could save some time and not have to rush back 100 miles to get to Grinnell to host the Meat-Up.

The roads I saw Friday also were being maintained. In fact, I saw two road graders during my recon. There were also plenty of patches of fresh, extra-chunky gravel as well. There was one thing that was pretty evident- the roads were not going to be all that smooth. 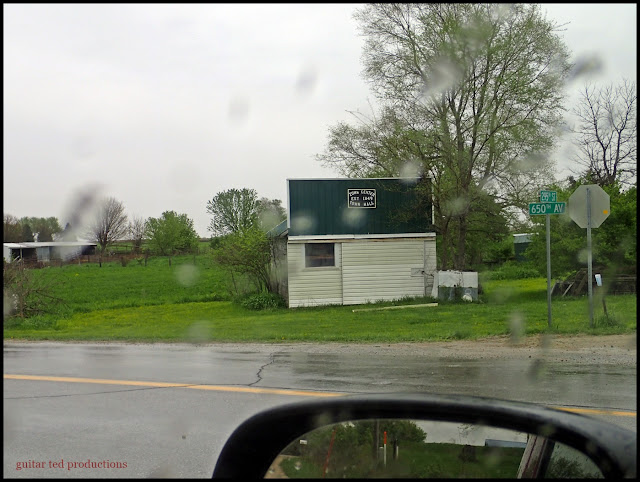 After seeing the course, that it was all okay, and that it would be challenging, I went to check in to my motel. I actually had time to hang out and relax. Wow! What a concept. Then I drove the short distance to the Grinnell Steakhouse. I met old friends and new and we got the gig fired up one more time.

This year the Pre-Race was a ton of fun. It has been a highlight of the year for me for a while now. There was one dark cloud though. That being the drops from the roster which occurred over the few days leading up to the event. The drops were for all sorts of reasons, some quite unusual and understandable. However; with the forecast being dialed in for a lot of rain and wind, it was hard to believe that many of these drops weren't simply the folks giving up due to the promise of poor conditions. I'll never know for sure, but the coincidence seems convenient.

So we had fewer folks than we've had in some time. It is really too bad. We really have a lot of fun at this meeting. Of course, Trans Iowa itself is a good time. The entire weekend really is a highlight for many folks' year. So it rained. Folks taking up a spot shouldn't "commit" and wilt when the conditions promise to be poor.

My previous two weeks before Trans Iowa were......difficult. I suppose I let that have the best of me in the sense that I partook of too much beer. That didn't work well the next day for me. Speaking of which, that will kick off tomorrows blog.
Posted by Guitar Ted at 1:30 AM

I have so much to say about tiv13. For now all that comes out is a massive thank you. The Slender Fungus was honored to be there. I hope I can get all my emotions and thoughts out.
Your friend,
Ari

I saw one of those graders out when I was riding Friday. The driver was laughing manically and looked a lot like you. It may have even been flying a kickinthejunk tshirt as a flag...

Really enjoyed following the event on Trans-Iowa Radio and social media! Thanks for all you do!

I'll try not to break my pelvis next yr.

What a weekend. My head is still spinning. A highlight of the year/life/etc.etc.etc.