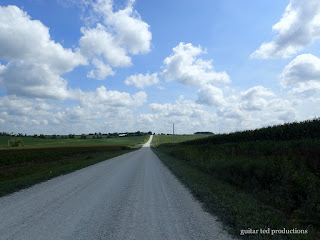 Special Announcement: Cyclists are a vulnerable user group and with drivers being more inattentive and impaired than ever before, we sometimes have tragedies occur like that of the death of Wade Franck, which hit the Iowa cycling community hard in 2015.

Unfortunately my friends in the Lincoln, Nebraska cycling community are going through similar emotions after the tragic death of Randy Gibson, an accomplished, well known, and well liked cyclist from Lincoln, Nebraska. Besides being a cyclist many may not know that Randy was also heavily involved in Gravel Worlds and was responsible for the artwork used for this year's edition of the event, as well as helping to produce the event itself.

Following is a press release for the event:

Lincoln’s Hub Café to host the ride and remembrance October 1 at 10:00 a.m.

LINCOLN, Neb. (September 27, 2017) – Friends and family of Randy Gibson are planning a ride to celebrate the life of the Lincoln cyclist killed Saturday, Sept. 23, by a suspected drunk driver. The ride will take place Sunday, Oct. 1, from the Hub Café, 250 N. 21st St in Lincoln.

According to Gibson’s friend and ride co-host, Corey Godfrey, the ride will give friends and family an opportunity to reminisce and share stories.

“Let’s get together and remember Randy by doing one of the things he loved most – ride bicycles. We will meet at the Hub Café and roll out at 10:00 a.m. The plan is to ride around Lincoln and end up back at the Hub Café around noon for lunch,” Godfrey said.

Godfrey said the route would primarily utilize Lincoln bike paths, with a total distance of just under fifteen miles.

Following lunch, the group will gather at the Jayne Snyder Trail Center, adjacent to the Hub Café, for a brief memorial, and to share stories and write well wishes to Gibson’s family. Participants are encouraged to bring along pictures, videos and other memories of Gibson to share with the group.

Learn more about the ride and memorial at the Ride for Randy event page.
Posted by Guitar Ted at 10:07 AM

Are you going to make it over for this?