I figured I'd share a few things about the Big Dummy here. It's been a great addition to the fleet. I usually use it for recycling duties, but I have also done the odd errand and hauled things back from the farmers market and whatnot.

I tried using it for commuting but my route is not "Big Dummy friendly". The thing doesn't like curbs and going over them, or even off them, is a jarringly unpleasant experience. I have to cross five or six curbs, (not sure, but at least that many), on my way to work. Loaded, the Big Dummy really sucks on curbs. That front wheel, due to the bike's geometry, is really pinned to the ground and the back end is waaaaaaaay out there, so getting the bike to rotate back on its haunches is nigh unto impossible. So, subsequently I decided to quit using it for commutes unless it was absolutely necessary.

So, I kind of panned the new Blackborow here a few weeks ago when it was announced, and while some of my criticisms were confirmed by a friend and others by Salsa's own "loading instructions" technical page. , I now have a new perspective on the rig. That was a result of speaking with a very good friend of mine, (aforementioned), who happens to be "on the inside" and was able to ride one of these for an extended period of time and has used it for lots of things and with lots of different loads. The main thing I took away was that it is possible to loft the front end of this bike, and that it could perhaps even be easier to do that depending on how it is loaded.

Therefore; I have taken a new interest in the new Blackborow. It would be something I think would fit in with how I use a bike like this, although Salsa is denying it is a "cargo bike", yet they allow for loads to be carried by bags on the rack. I guess it all depends upon your definition of "cargo".

I was reminiscing about what it took to get a tubeless set up on a 29"er circa 2007. I was curious as to how I could make my 2006 Industry 9 wheel set tubeless with the DT Swiss TK series rims the wheels were spec'ed with. Of course, you had to do it "ghetto-tubeless" because other than the somewhat hard to get your hands on Stan's tape, there wasn't any other options and tires were hard to find that had a tight fit.

It wasn't impossible, but to get these rims to be tubeless with the original set up, with the "not for tubeless use" Vulpines, I had to go to extraordinary lengths. I started with two runs of strapping tape. That was covered by 3M mounting tape which I had to cut to width. Then over that went two runs of black electrical tape. Only then could I get the tires to set up. Of course, it wasn't easy even then. I remember it was quite the struggle. Anyway, things are, thankfully, much different ten years down the road.

After stripping out all the layers I put in ten years ago I added two runs of Velocity "blue" tubeless tape, added two Bontrager road TLR tubeless valve stems, added the "MG's Secret Sauce" (again- don't ask ) tubeless goop, and they aired up with a small compressor I have. Oh......and I used a brand new set of WTB TCS Nano's in the 2.1" size.

There was one, minor disconcerting fact that I noted while doing this. The tires never made a peep setting up. I did not get that satisfying loud "snap!" of the bead setting in its seat on the rim. That's likely because the TK series of rims that DT Swiss used to make has a pretty aggressive hook bead whereas newer tubeless ready designs do not. The newer, tubeless ready rims generally have a squared off seat which has a slightly larger diameter for the tire bead to "lock" in to. Now, I am not going to be running low pressures or smashing into trail obstacles with this set up, but I have no doubt that if I did the tires would easily burp. So, while I am good to go for gravel, I still want to look into getting "real" tubeless ready rims. 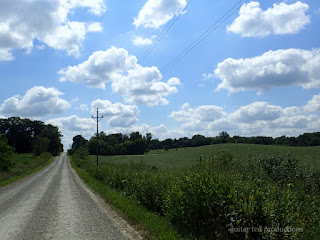 So, the next deal I want to get going on is to try out the Pofahl on the planned century ride I have mapped out. I haven't done a century on a single speed in a long time, so I am overdue.

I kind of wanted to do this in September, but, obviously, I am running a bit short on time for this! Well, Saturday is my last chance and I think I am going for it unless I still feel like I am run down.

Yeah......I've been not feeling the best lately. I relapsed in terms of my cold right after the trip I was on last week. Feeling run down, congested, and well........crappy. We'll see how this whole single speed century thing goes.

But, I will give it my best. I have a pretty "single speed friendly" course designed so it isn't anything too radical in terms of elevation gain. I'm hoping that I can get up early on Saturday morning when it is still dark out and get going on that.

Then the next deal will be the second Fat Bike Century. That should happen in October sometime. We actually did that a year ago this weekend, myself and Tony, and Tony wants another go at that as well. So, if I can pull off those two century rides I'll have done five century rides and will need only one more for my own version of a cup o dirt.

Have a great weekend and I hope that you have a good bicycling time!

With regards to the Big Dummy geometry, it seems that all you need is a complete shop and a willing partner.....
http://surlybikes.com/blog/post/is_it_possible_to_wheelie_the_big_dummy