One of the first gravel specific tires that came out in March of 2012 was the Clement MSO 40mm tire. Along with that model was the release of the 35mm USH, also a great tire on gravel. It set the stage for what has become a hot niche in the cycling world. 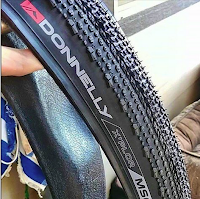 Five years down the road, nearly every tire and bicycle manufacturer is pumping out some sort of "adventure/gravel/all roads" product. A lot of that is due to the foresight and passion of Donn Kellog, the head of Donnelly Cycling. He researched the market potential, he spoke with riders that were engaged in gravel riding, and Donn made tires for gravel happen a long time before many companies did.

I've met the man and he is one of the most driven, passionate people I know in the world of cycling. I don't doubt that Donnelly Cycling will become a well known name in the circles of cyclo cross tires and gravel tire users. In fact, Donn owns the designs for such tires as the PDX and MSO, among  others, along with a wheel system which will carry over to the new Donnelly brand.

The reason for the change is due to the licensee, Pirelli Tires, who now have decided to enter the cycling market with tires and more, effectively becoming a competitor to Clement. Read more about this by clicking the link to the "Bicycle Retailer and Industry News" story concerning this.

If you read all the trade rags and pay attention to marketing you already know that e-mtb bikes- motorized off-road vehicles that just happen to have pedals- are the hottest selling product in bicycle shops across the Continent. Some claim that between 50% and 75% of all bicycles sold will be electric motor equipped vehicles that happen to have pedals within the next few years.

Interestingly, there are several things bubbling underneath the attention grabbing headlines which I find curious. For instance, there is a debate about standards for these motorized bikes in terms of helmets. In the Netherlands, they have already passed legislation for helmets to be used by these electric powered bike riders and they will have to use what amounts to moped rated helmets. Other countries are still debating this.

Component manufacturers are already offering heavy duty, down hill racing rated brakes for the electric powered mountain bikes. The high weight of these machines requires a more powerful braking system. Most e-mtb's weigh in excess of 50lbs. Add in the weight of an average rider, who may be carrying an extra battery to extend his range, and the weight gets up there pretty quickly.  I look for even more electric motor bike specific brakes, tires, and suspension systems to be introduced which will handle the mass generated by adding the battery and motor to these two wheeled  off road machines. Yes.....that will make them even heavier. But to keep weight in check, you have to go to the extremes that Pivot Bikes has and that bike still weighs in at 45lbs. It is claimed to be the lightest in its category.

I also found the following curious. In a story in "Bicycle Retailer and Industry News" recently, the largest seller of electric powered bicycles in the US, Pedego, was said to be selling bikes which can be throttle or pedal assist. This runs counter to what many are saying when they claim that "e-bikes are okay because they are pedal assist only and there are laws regulating the power they can have". Well, that isn't true, not 100%. People are using throttle controlled electric motorcycles with pedals now and they are modifying them for higher outputs. I know because it is happening right here where I live. It isn't going to stop either, just because there are "laws" against it. First off, how will the laws be enforced if these vehicles are not registered and insured? Furthermore; there is evidence from the off road side pointing to a similar end game.

In the interview regarding the Pivot Shuttle with Pivot head honch, Chris Cocalis, on "Pink Bike.com", Cocalis is asked about higher powered, "closed course only" electric powered off road bikes and how Pivot will place itself in the future regarding these bikes. He is quoted as saying, "There are companies that seem to have already entered into a bit of a horsepower race and there are companies working hard on e-motocross bikes."

I've said before that product names are getting weirder because so many names are copyrighted and registered trade marks that almost nothing that makes sense is available to name a product these days. Case in point, the new tire from Terrene called "Cake Eater". Maybe it comes from the phrase "You can't have your cake and eat it too", but if so, that's kind of a stretch. Anyway........

I like what Terrene has done here and I think this might be a candidate for my "commute by fat bike" rig. Stud pockets and major siping with a fast rolling tread design make this look far better than the Wazia which I strongly considered last season for the same idea.

I'm not in a huge rush to get a studded fat bike tire because the only reason I'd need that is for Winter road riding. Icy streets on the way to work would be a reason and possibly country riding as well. Studded fat bike tires are either poor rolling beasts or cost an arm and a leg, or both. This tire, with the ability to set the studs on the outer edges while having the siped center knobs is looking like a design I could get on with. Pump it up for faster rolling and let the air out to engage the studs. Plus it is reasonably priced, comes in several versions, and should be available this Fall.

Okay, that's a wrap. Have an awesome Labor Day Weekend!

So basically those e bikes are motorcycles with pedals.

Thanks for the Clement blurb. I thought I got spammed the other day.

Cake Eater is also referenced in the 90s hit moves "The Mighty Ducks". The team from Edina MN (a Twin Citys suburb) is the rich kid bad team in the move and the slang they are called by the under dog Mighty Ducks is "Cake Eater". I figure with QBP being in the Twin cities it may have been picked up from that.

@ Kevin Winslow- I did not know that! I bet you are correct. Thanks!