On my day off I did something I haven't done in a long, long time. I rode at Ingawanis Woodlands.

It's been more than months, it has been over a year since I last went to the single track trails of Ingawanis and enjoyed the woods. Before that last time, it was nearly a year that I had ridden there. So, what's the deal? Why the hiatus?

Well, when I was writing and running the "Twenty Nine Inches" website, I had to ride up there. All the time. It was the best place within reason to go and test product. Almost no Wednesday went by without me riding the trails up there during riding season. This was probably from about 2007 until the Fall of 2014 when I wound things down with my gig at "Twenty Nine Inches". So, for a solid seven years, I sacrificed doing any other sort of riding but single track, for the most part.

I missed going out on long gravel road explorations. I decided to instigate the 3GR, which happened on Saturday mornings, to scratch that itch, and that helped, but I wanted more. So, when I was finally free from doing TNI stuff, I went whole hog into gravel riding with little else other than that. Now, I always tell my kids, "Too much of any one thing is not good for you.",  and that goes for me too.

So, I loaded up the Singular Buzzard, and despite the lingering effects of a nasty cold, I went up to Ingawanis Woodland to see what is up. The day was beautiful. Nary a breeze, puffy clouds, and upper 70's for temperature. In a word- perfect.

Now I haven't been up there for a while, as I said, so when I pulled in to the formerly grassy lot, I noticed several things that are not the same anymore. The mostly dirt lot being one. Obviously, the usage factor has multiplied by several times since I used to ride up there. You used to see a whole month's worth of sign in's on the kiosk whiteboard. Now it looks like a green smudged mess! There were new signs up. I noted that the old service road was mown and there was single track running up the center of the former two-track road. Hmm..... I wondered what else had changed around here.......

Well, fortunately not a whole lot else has changed. I found that the old service road "trail" was as potentially confusing as the road was back in the day when it split the trails into the Inner and Outer loops. That all changed when Karmen Woelber rerouted and added some bits along either side of that service road. Old timers would know what is original and what isn't. I noticed that the rocks are more prominent than ever. It used to be rare that you saw rocks out there. Can you believe that?

There were lots of deer around. Young ones. I scared up three right away, then another couple later on. When I didn't clean a steep climb trying to use too tall a gear, I stopped and heard several noises in the woods that indicated the wildlife was busy. Squirrels, deer, birds, and more were afoot in the underbrush and flying above me. I even saw a fox.

I stopped in the part of the trail system they call "The Bottoms". Such a travesty that this section is not named for the guy who tirelessly worked to maintain both sides of the Camp Ingawanis trails and put that section in. At least call it by his name. But no. It's "The Bottoms". Well, I call it "Paul's Loop".


As I came out of Paul's Loop I ran across another confusing bit of trail that ended up just being a cutoff so you wouldn't have to do the steep climb back out. Lame. But not unprecedented. Whenever riders find something too tough or difficult, or even mildly annoying, they cut it off and "sanitize" the trail.

To be fair, there is a lot less sanitization than I feared there would be, but it is creeping in. You can see little bits and places where folks are rounding off sharper bends, avoiding the rocks, or lensing out corners.

The service road trail is weird. Why have that? It's confusing when you don't know the trails. And good luck knowing where you are at if you are new here. The sign posts don't help you at all. To me, it doesn't matter. Even though I haven't ridden out there in a long time, I know right where I am at at all times. But I have over a decade of experience running around out there to bank off of. New folks? Not so much.

I'd heard that a straight shot up a hillside had been turned into switchbacks to help maintain the soil and trail. This was excellent. I was stoked on the new bit for sure, and later on that my favorite old switchback turn was still mown and ride-able. However; some new bit going straight from Quarter Section Creek right up the steep hillside has been put in and that seems incongruous with making trails sustainable. You put in one awesome upgrade and took it right back to zero with a stupid fall line section of single track? I'll say it again- Stupid move. 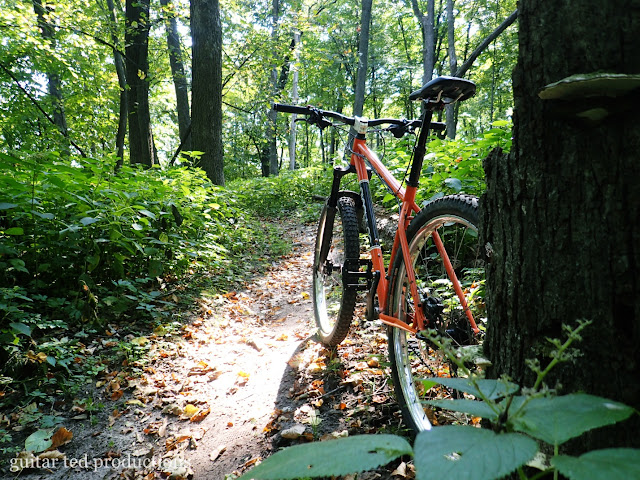 Ingawanis is still awesome and the best place to ride single track around. Don't get me wrong. I love it. But that new bit I found late into my ride made me dismayed. It's things like that which can end up just making a trail system goofy. Especially when it was a totally unnecessary move. That distance could be better traversed using the original trail, but whatever.....

Before anyone here pulls the "Why don't you get involved in trail maintenance" card, let me just say that all previous attempts I have made to lend a hand have been rebuffed but for the one time I showed up unannounced while maintenance was happening one day. In fact, I have been mocked on social media and put down for my views on how these trails could be more user friendly before. So, yeah. It isn't like I haven't tried. I'll just leave it to the powers that be. Nuff said........

So, anyway.... I thoroughly enjoyed my ride Wednesday and the trails were awesome. I'll have to come up a little more often now that my gravel appetite has been satiated for a while.

That mowing will keep the ticks and chiggers away from the legs.