This C.O.G. 100 Iowa Single Speed Gravel Championship idea requires that I follow through with some work. Gotta do my due diligence and come up with a course and then go and look at it. Stuff like actually thinking through logistics, how the roads link up, making it interesting, and of course, it's gotta have hills.

As most of you know, I have a background in doing all of the above. So, you probably won't be too shocked to hear that I scrapped my entire first draft for the course and did an entirely different route the night before recon. The night was short, as I awoke at 5:00am to get ready to be picked up by N.Y. Roll and his dog, Ella, so we could go do the course recon.

The weather was great last week, right up until late Friday night, when it snowed. Of course it snowed! We couldn't go out and recon in perfect conditions, that just wouldn't be right! Well, at least I thought we might be doing recon. I wasn't 100% sure after we passed Traer. They had a bit more snow through there and things were in bad shape as we drove Southward.

We had a bit of a respite on Highway 30, but then as we tried to go South on Highway 146, we found it was closed at LeGrand for the installation of a railway overpass. We ended up following a pick-up truck for several miles on gravel as a workaround. Then eventually, after almost two hours of driving, we made it to Grinnell and the Frontier Cafe.

After grub time was complete, we headed out to Miller Park and started recon. It was not very good out in the country. Snow was all over the roadway, but we were in a Subaru Crosstrek, so we had that going for us. As we rolled along the flat light of the washed out sky against the all white roadway made for tough conditions as there was little contrast. N.Y. Roll did a great job keeping inbetween the ditches though. 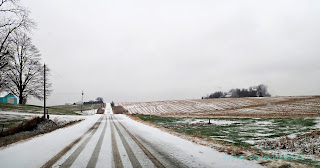 Later on the air temperature and whatever rays of the Sun that were getting through cleared up the road a bit, but then it got muddier and softer. Just before all of that, we came up on a Level B Road I wasn't prepared for. N.Y. Roll managed to negotiate it just fine, and we considered the options. Well, seeing as how it would be the only mile of Level B in the entire 100+ miles, we are strongly considering leaving it in. We are probably going to have a contingency plan if things look way wet in the Spring where we can avoid it though.

Another thing long time readers of the blog know is that I almost always have an instance to share where I end up saying something like, "This is why we do recon......". Well, just such an instance came up again. This time it was a bridge that is out. A very recent take out which isn't indicated on any map or GPS mapping program. In fact, N.Y. Roll went to bring up an online map at the point we saw the signs and there was no cell service. If I've said it once, I've said it a hundred times- You gotta put your eyes on your course to make sure it actually exists. There are no short cuts to this.

So, we will have to re-route around that, but the workaround we used Saturday, I think, will actually do just fine. It kind of throws a wrench into a plan but something else I saw may make up for it. Vague. I know, but details will come out. I'll get back to this later......

So, with the re-route and all I think we are around 110 miles at this point. My inclination is that it may actually be slightly less since the best estimate of distance we have at the moment is N.Y. Roll's odometer. Of course, we backtracked a mile or so, and that's why I feel we will see that 110 figure go down a touch more. I have to dig into the route map again here and get it nailed down.

Convenience store: I had mentioned that I was going to provide an optional course for resupply choice which would make you add even more miles and take away time. Well, my original intention was taken out by the missing bridge, so I was a bit disappointed. That said, the route goes within about 5 blocks or less of a convenience store riders will see from the route while going through a small town at around the 80 mile mark. My inclination is to advise riders to carry ennough food and water to last 80 miles. I think that was always around what I had advised, on average, for Trans Iowa riders, so I think I'm probably going to stick to that.

So, from this point we are going to do another draft of the cues. These will be checked against reality later, probably next year closer to the event. Cues will get printed after final verification. We are looking into getting two "Championship" jerseys readied for the potential winners. Designs are being drawn up for that. The registration details will be finalized very soon. We are pretty sure we are going to have a $25.00 entry fee which will cover insurance. Finally, details that will be on the radar will be finalizing the roster, doing number plates, and getting some venue details finalized. Stay tuned.....

A major hurdle crossed today though. The course will be hilly! Also, we hope that we don't see as much traffic as we saw. We most likely will not, since the reason there was so much traffic was the hunting that was going on.

Yeah, I thought about y'all when I watched the weather yesterday. I'm just wondering if you have ever used a Delorme Atlas and Gazeteer in your route planning. I realize rural roads are often in a state of flux,but a Delorme is really interesting to just look at what old rural roads you've known for years look like in an atlas.

@Steven Butcher- I used DeLorme for T.I.v1 and v2, then came to realize that there was a better source which broke down the surface types of each road we were looking to use. That source is the Iowa D.O.T. site.

In 2013 those maps were "updated"- which meant they made the maps color coordinated and revised paved routes on the maps. They did not revise unpaved gravel and dirt roads, however, and we know this from having come across roads still marked as through roads which have been truncated, abandoned, or decommissioned to Level C Roads years ago. You can usually tell when there are 20-30ft tall trees and what not overgrowing the "Road Closed" signs! Those were probably closed prior to 2013! :>)

So, these roads most people don't care about are neglected even on the State level, as far as attention to detail goes. Counties cannot afford 100's of thousands of dollars to repair bridges that are no longer safe when traffic counts don't warrant it. 50-75 years ago there were likely three times the amount of farmers that relied on that bridge. Now it is just a minor inconvenience to drive over another mile to use a bridge that is newer.

That's cool, Mark! I sort of figured you'd have developed a more reliable source of information.