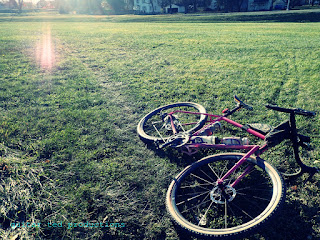 Winter has made an early appearance here in Iowa. We've had a skiff of snow, that melted, and now it is just plain cold. Really cold. My commute yesterday was at 9°F with a wind chill well below zero. And I forgot to take my neck scarf to put up over my face as I rode directly into the Northwest wind. Bah! The little things we have to relearn every Winter. Well, that and Winter pounced upon us all at once. No easing into it this year.

It rained and flooded not long ago and the water soaked ground is now rock hard. Frozen tundra. Riding on grass or dirt is like bounding over broken up pavement. There is no forgiveness at all. It's funny that you don't realize how much Earth has give to it until it doesn't.

The Bubblegum Princess rolling on the Enve wheels was getting a work out over the frozen dirt. Patches of ice gave me pause. I ran through a couple of those puddles with thin sheets of ice layered like thin window panes. The loud crunching of ice breaking as my WTB Resolutes cut through was alarming, but somehow satisfying all the same.

I kept telling myself it was okay. The Sun was shining. It could be worse. I was warm-ish. Work harder to get warmer, and on and on. It's funny how that self-talk can take your mind off the negative and you end up being okay. I made it to work and my face didn't even freeze off.

November in a bike shop in Iowa. Nuff said. That was tough. I think working during this time of year is actually harder than it is when we can't get ahead on jobs. Too much time on my hands makes for a long day. Of course, we'd all rather be busier now, but this cold intrusion has pretty much chased all but the most hardcore cyclist off the trails and roads. Even some of them are doing their "smart trainer" work indoors now.

The ride home promised to be warmer, but for whatever reason, I felt just as cold as I did in the morning. Weird! I took the long way home from work, doing the out and back on Shirey Way and then cruising Riverside Trail over toward Waterloo and my neck of the woods. The Northwave boots I talked about yesterday are looking to be pretty good. I wasn't cold in the feet on the way to work and an hour ride after work proved to leave my toes just "chilly", but considering I had sweat in my shoes at work...... Well, more testing needs to be done there.

The weather is supposed to moderate to highs in the upper 30's, maybe low 40's? That will feel like a heatwave after this cold shot. I will be enjoying it the best I can. You know it won't last, because we are nearly halfway to December and Winter will be in full force, or it should be, by that time.
Posted by Guitar Ted at 1:30 AM

We even experienced a bit of winter in S.W. Missouri this week with temps down to 12 deg. F and about a couple inches of snow; but expected temps up to 50 deg. F this Friday. Just a question regarding "chilly toes". Do you wear wool or wool blend socks with your winter cycling boots?

@Steven Butcher- I have wool socks and I believe the ones I had on yesterday were Twin Six sourced. Not sure what they do- blend/pure Merino. I think it has a lot more to do with my feet having been sweaty from working at the shop, then getting chilled, at which point the toes are not going to warm up. A switch to a dry pair of socks might have been better in this case.

The socks were thin too, Thicker socks would have been better in this case also, I believe. That is why I said, "more testing" is needed.

I could not find a temperature range defined on the site for these boots, but all Northwave says is they are suitable for "Fall/Winter". That could mean many different things. Comparatively, 45NRTH says their Ragnorok is suitable from 45° down to 25°, so I would assume a similar range for the Northwave. I was definitely below that on my ride described in the post.

Glad to hear that you didn't lose that handsomely rugged mug to the elements. I was wondering if anyone else gave themselves pep talks as they rode, I've discovered on longer gravel rides if I let myself get into a mental funk it's much harder so I just try to stay positive because it's sucking for everyone else also. Are you doing a full review on those boots on the RG site? I'm interested to see how they stack up against other boots already out there.

@Rob E- Thanks Rob! Yes- I am doing the full review on these "boots", (Northwave says they are "shoes")and the first part goes live at the end of the week. I'll drop tidbits about them here and there on this blog though as I go along. Stay tuned....

I have really been enjoying my Specialized Defrosters this season. I only wear some thick wool socks and my feet have been toasty.

Sitting in our shop here in Southern Ontario, it's now quiet time for us as well. It's snowing out at the moment and I'm wading through all of the Shimano TEC Certification modules. It passes the time but you can end up with bleary eyes after a few hours. Ah well, time to sell fatbikes and indoor trainers.