How I Clean My Bicycles

I was down in the Lab doing some maintenance and set up when I remembered that one of you readers out there had suggested that I might tell you all how I clean my bicycles after they get all dusty and dirty from gravel riding. Of course, this thought appeared in my mind only after I had started cleaning the Orange Crush rig from the mud and grit it had accumulated over a few wet country rides. But that didn't stop me from making this post! So, here following are my unconventional tips for cleaning a filth ridden bicycle that has been treated poorly and put away wet.

First though, I need to tell you that these techniques have been honed over the span of 27 years. That's a LOT of dirty, filthy bicycle cleaning. Also, keep in mind that I am a mechanic and that "pristine finish" preservation is waaaaay down on my list of priorities. If you want to keep your bicycle looking perfect- don't ever ride it. And certainly, don't read the following tips. They aren't for you.

So, over the years of cleaning, not only my own bikes, but those I get in at the shop, and those from past shop gigs, I have developed one, major cardinal rule, never to be messed with.......

Don't Ever Use Water To Clean Your Bicycle!

Yep! Never, never ever, and don't spray anything on your bike with a hose. Spray bottles are okay. I stay away from any of that if I can help it though. So, you are probably wondering how I ever get a bicycle clean. Well, it's easy, actually. I just don't let water anywhere near my bicycle, unless it rains, it is snow, or I ride through a puddle. Water rusts, corrodes, and gets in places you cannot see it hiding. The absolute worst bikes for water intrusion I have ever worked on were almost always bicycles which were meticulously cleaned by their owners with water from hoses, buckets, or whatever it was they did. Water ruined their bottom brackets, head sets, wheel bearings, and cables. Keep water away from your bicycle and guess what? That cannot possibly happen to you, that's what. 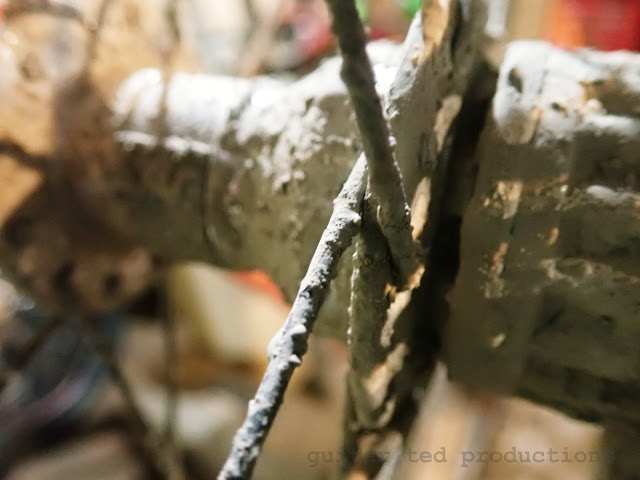 Secondly- if you get your bike muddy or dirty, let that stuff dry out first! It will be easier to get off, in most cases, and believe it or not, you'll be less likely to scratch your finish. Wet, gritty mud takes the shine off your finish far easier than dried out dirt and mud do. Typically I end up knocking off dried up mud with my fingers, a soft cloth, or soft brush. In fact, in the instance above, which is my Black Mountain Cycles "Orange Crush", I used a soft brush and a t-shirt torn up into rags. That's it. Nothing else. 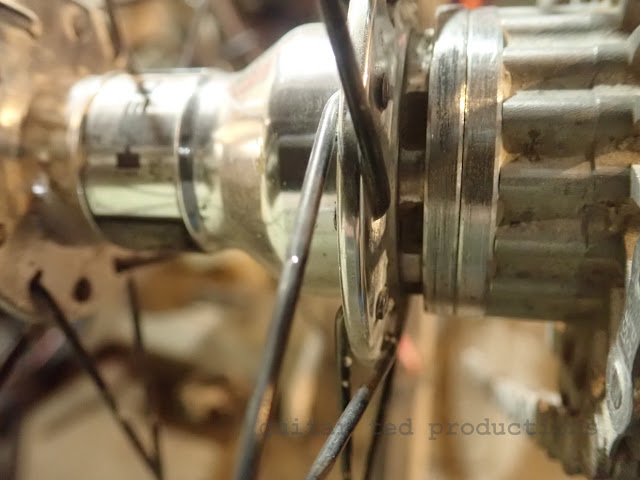 So, there is the result. Clean and shiny! That took less than three minutes to do, by the way. Now after doing that, I might come in afterward with some Pedros Bike Lust. It cleans up remaining dust, and like they claim, it leaves a protective coating behind which does make future cleanings much easier. Plus it helps your bike and parts "glow" which is something a lot of other cleaners do not do.

I generally do not spray anything directly on a bicycle to clean it, not even Bike Lust, but instead, I spray some directly on a rag, then apply it. That way you keep overspray from infecting certain things like disc brake pads, or rotors, which can contaminate easily.

Now, there are a LOT of tight places in and around a bicycle. Bottom brackets, front derailleurs, wheels/hubs, and around brakes, just to name a few. I use the t-shirt shreds, spray some Bike Lust, or in extreme cases, some other stronger cleaner, on the strip, and then thread the t-shirt strip through the "tight spots" and use it like dental floss to wipe away grime, dirt, and mud. A soft bristle brush can be employed in and around spokes, hub flanges, and other tight spots to scrub off stubborn bits of dirt lodged into tight corners.

Now, I've used TONS of different degreasers, cleaners, polishes, and elixirs on bicycles, but Bike Lust is the best of the lot. It even breaks down many greases, cleans off bug guts, and dried worms are no match for this stuff. It just cuts through like most other cleaners only wish that they could. So, you may have, (and you probably do), a favorite cleaner or degreaser. I understand. However; I don't want to hear about it unless you know it is better than Bike Lust. I doubt that it is.

You may also wonder how bad my finish must be. Well, keep wondering. It looks perfectly fine for a bicycle drug through the knothole more than once in the eight years I have owned it. My other rigs all get cleaned similarly. No one notices any oddness in my finishes in relation to their own rigs. Plus, scratches and biffs only add character to your bike. A little dulling of the finish, if there is any, (I can't tell), only adds to the patina.

That's pretty much it. I usually keep a cleaning under a half an hour, but sometimes in extreme cases it can take longer. My post-2015 Dirty Kanza clean up (the "Mud Year") took hours! But that is the exception, not the rule. I usually don't have to take anything off the bike either. Not even the wheels. It just goes a lot faster that way, and look......I'd rather ride than clean. But it is super cold here, snowy, icy, and gravel riding isn't going to happen for a bit. Time for maintenance! So I am cleaning up the fleet a bit and sprucing up a couple of rigs.

Got questions? Hit me up in the comments section.
Posted by Guitar Ted at 1:30 AM

2015 was the heaviest Fargo known to mankind!

What about the drivetrain? Same technique? How often do you lube the chain?

GT, I think only old bike mechanics (who know how not to create more work for themselves) understand your bike cleaning practices.

Great Information! It has been a record wet year here in Oklahoma, leaving very few trails available for a regular ride. Even on the trails we can ride, the bikes still come home covered with grime. Usually I would fill a bucket with soapy water, use a sponge, soft brush and dry with a towel. Because it has been so cold outside, I have lately been doing pretty much what you described. I wipe everything down afterwards with Original Bike Spirits Spray Cleaner and Polish. It is what I use on my motorcycle and what I have on hand. Will definitely give the Pedro's Bike Lust a try.

Interesting, we have a fairly similar cleaning routine except I have been using Muc-Off instead of Pedro's... maybe I'll have to give Bike Lust a try once the Muc-Off is gone and see if it works as advertised.

@Rob E- We've tried Muc-Off degreaser and it works fantastic! But......THOSE FUMES! Damn! I get a head ache just thinking about it. We reserve the Muc-Off for worst case scenarios in the shop.

Thanks for the tips, sounds like something I'd like to try for getting mud and road grime off. Do you feel like this is effective at getting salt and winter nastiness off as well, any modifications to this for a winter commuter?

FYI - deep clean to me is pulling wheels, fork, chain, crankset, and chainrings to get all grime, dirt and dust off the internal parts of the components with a regrease and relube before reassembling.

@Unknown- Well, that is going to differ for me and anyone else. Conditions ridden in dictate this to a great degree. If I rode in spring, it was wet, muddy, or if I were in the rain more often, then this "deeo clean" would occur on a frequent basis. If, on the other hand, I was riding in Summer, it was dry, and not super dusty, I may not do a "deep clean" at all. So, it just depends on the conditions, in my opinion.

Same question as @CharlesMartin, how do you clean your drive train? Same Pedro's Bike Lust to degrease chain? Do you use a stiffer brush to get inside the chain links or just a rag? Thanks!