There were several years running that whenever a company made an announcement of a mountain bike, it was all about the top of the line, carbon fiber framed model, and oh yeah....it is offered in a cheaply spec'ed aluminum version too- but about that carbon fiber!

Well, lately it seems that there is an undercurrent of announcements featuring.....aluminum framed mountain bikes? Yep. I wouldn't call it a backlash against the uber-spendy carbon rigs, because there aren't that many new-fangled metal framed ones out there, but there are some, and that is notable.

Ibis announced a new one based upon their Ripmo model and they call it the "Ripmo AF". (Yeah.....double entendre' and all) It's a cool idea with the potential to reach more riders who cannot afford to throw down 5+G on a bike that will be thrashed within an inch of its life. Basically, the metal framed bike could be said to be the bike for those who really use up equipment. They don't care about weight, scratches, and they don't want their bikes to be snapped, cracked, or punctured by their riding style or by the environment they ride in.

But of course, you can break anything. I get that, but if you have seen the manufacturers warnings about scratched carbon, well, that alone makes me think twice about a carbon mtb frame. Especially if I were to ride hard in rocky terrain. Heck, I wince whenever a piece of gravel smacks the downtube of any carbon gravel bike I ride. You just never know when that one hit will be the one to put your bike's frame into the trash bin. So, it is cool to see manufacturers looking to make aluminum something other than "the cheapest alternative".

Maybe you saw this? SRAM have announced the "UDH Hangar" for the mounting of rear derailleurs on through axle bikes from 2020 on. It is proposed as a "one solution" hangar that is compatible with all rear mountain bike derailleurs and could be compatible with all future MTB frames. That is- if the frames are designed around this standard.

Much like SRAM's DUB bottom bracket, the idea is to streamline the choices for rear hangars down to just this one. If you have ever noticed, there are probably well over 100 different hangars in existence for modern bicycles. Many are hard to source, and many are quite expensive, seeing as how they are simply machined chunks of aluminum.

So, while this is an awesome idea, I just don't see it panning out. It well may show up on several bikes, but if we think manufacturers are not going to make their own, proprietary hangars anymore, well then, we're stupid. I just do not see this SRAM UDH thing making that issue go away any more than I see DUB bottom brackets fixing the issues of the various different bottom bracket standards that are out and will continue to come out.

But kudos to SRAM for trying.

You probably know that the DK200 is a BIG deal in the gravel scene. It's far more than a race, these days anyway. It basically has become a week-long gathering of the gravel folk and now a company called CrankTank want the media in on the action.

CrankTank has done something similar at the Kona Ironman event, (also a Life time Fitness event....hmmm....) and now they state that "With the shift to DTC (Direct To Consumer) that is currently happening in the bike market, we see brands introducing product to media and consumers in a more compressed timeline and we see inventory more aligned with media moments. For this reason it makes the most sense to integrate your brand communication strategy to include consumer events in your product marketing strategy. DK is the currently epicenter of gravel, and brands are jockeying for position in this emerging market. CrankTank makes it easier to bring new product to market in the gravel segment with Impact Kanza." (Read the full story on "Bicycle Retailer And industry News" here)


Curiously, CrankTank is taking the year off from doing the Kona event and another event in Sun Valley they have produced in the past. Apparently all hands are on deck to bring more media attention to gravel. 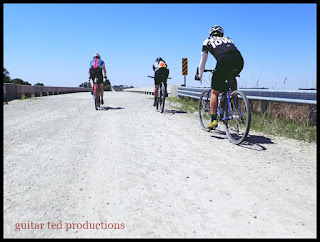 Hey ho! It's been a minute or two since we have had a Geezer Ride. A couple of years back, some fellas came down from Cresco and joined us for a Geezer Ride. They got "bitten", as you might say, and they decided to put one on themselves. (Which I allow, by the way) The thing was, one of the principals involved had knee work done last year, and since he wanted to ride, well, they put off doing a ride till now. That's one of the reasons why a Geezer Ride never happened in 2018. Anyway.......

This Geezer Ride is being put on by the guys at Cresco Bicycles. The date is SATURDAY, OCTOBER 5th, 2019. The time will be 7:00am for donuts and coffee at the shop. Ride starts at 8:00am sharp!

The route has been devised by the fellas at Cresco Bikes and all I know is that they will be guiding us. It's going to be about 51 miles in length. THIS IS SELF-SUPPORTED! Bring what ya need for the distance! We will be going through one small town, so there might be some chance to resupply, but I am not sure on this. I was told it will have historical bits and only the first third has any hills while the rest is described as fairly flat. I know this area, and there are no real tough hills.

I also need to communicate that the route will not be released on digital platforms, there will be NO FILES to put into a computer, and NO MAP OF THE ROUTE beforehand. If ya wanna know what's up, ya gotta commit blindly. We'll all ride off that cliff together the day of the ride. If'n that ruffles yer feathers, don't plan on coming. This is a Geezer Ride, after all.

Check for any updates here, but I suspect that unless weather shuts us down, you won't see anything else other'n whatz there now. Geezer on!

Okay, that's a wrap for this week. Have a great weekend and ride them bicycle dealios!
Posted by Guitar Ted at 1:30 AM