NOTE: The C.O.G.100 was ultimately cancelled. I also have retired from event productions/promotions, so any future event like this will not be something I am involved with any longer.

I have left this post up as a reference, nothing more to it than that, since the event is now defunct thanks to COVID-19 issues.  The original post follows the jump break.

Also: There is some leftover C.O.G. 100 merch for sale. See the Garage Sale Page Here

Hey all you single speed nut jobs out there. Listen up, because N.Y. Roll and I have some news concerning the C.O.G. 100 Iowa Single Speed Gravel Road Championship.

They say "single speed is dead", "gravel has jumped the shark", and riding in the Mid-West is dumb, but ya know what? We don't care what they say. We're doing this again, and that's that. Y'all can come along for the good times or just sit there and be a typical keyboard warrior. What'evs. If you are in on this deal, read on. If not, move on......

Back in May, when we announced that this would, in fact, happen again, we posted this poasty-post. In that screed we asked y'all for ideas on what you thought about some prompts we floated out there. The ideas that got the most energy and the ones we liked are the following. First- There will be some sort of nod to the Military Veteran folk. One idea was that people could sponsor a Vet, have their name on the number plate, and that we'd do something with donation money that would support veterans in some way. (Big idea, may be too complicated, but it is interesting) The other thought was that we'd give those in the Military or Veterans of Military service some sort of discount. The first idea makes everyone pay the same and those who want to put in a little bit more would get their money donated and the name on the number plate, etc. The second idea is just cut and dry. Easy-peasy. Maybe we'll do both. Dunno right now. 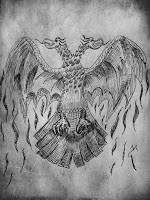 The second idea was for a shorter distance for "fun". Y'know.....type 2 fun, single-speedy fun, early Spring in Iowa fun? Yeah........that kind of "fun". Anywho..... I'm thinking we offer one distance and that it be in the 25-30 mile range. Whatever I can cook up that makes sense for a course, but something in that range. We'd be expecting that to take folks somewhere around 4 hours maximum, so that "event", (ride?), could be over by 12:00. I think starting everyone at the same time, or close to it, would make for a cool experience, so we will consider all that as we detail things out. But at any rate, this will be a part of C.O.G the 2nd.

Okay, what we do know, and this all is set in stone, are the following bullet points for the next C.O.G. 100:

We will be having a Friday evening get together/registration sign in at Peace Tree again, plus suggesting we all get there afterward on Saturday. Start time will likely be 8:00am again, and this course might be longer than 100 miles, but it will not be as long as last Spring's was. I'll try to get it down to close to a hundy, but things are not as cut and dry in terms of roads as some of you OCD folks would maybe like it to be. Bottom line: It will be what it is. There will be one opportunity for resupply only at a convenience store somewhere on the route. Do not request that it come at "such and such" mile. It will be where it is. You will need to carry what you need. Be Prepared. You Are Responsible For You! We will announce it all- fine details, course description and more- before registration.

Speaking of registration, we will also be working on the details of that and make a further announcement later into the Fall.

Finally- This will be a hard event. Many will not finish it. Maybe no one will. And we are alright with that. Don't plan on coming if that rubs ya the wrong way.

Great! I could do a 30ish mile route. There's no way I could finish the century version.

I like the idea of sponsoring a Military Vet. At COG 2019, I often thought about my late Uncle (Vietnam Vet) who had passed just a few months prior after a 20 year journey with Parkinsons. Reflecting on him is what carried me to the finish line, even though it was 2 hours after the cutoff.

I am baffled that people got upset about not being able to finish the course within the time cut off last year... that's part of the challenge. I did not finish within the time cut off which bummed we out a bit (I did finish the whole course though which made me happy) but I don't see why people should direct that frustration to the race director. I am so excited to try this again this year.