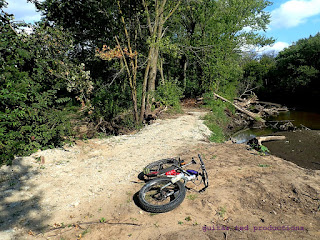 Labor Day I took a different ride. I decided to head out to Marky-Mark and assess the condition of my little connector trail. I was pretty sure I'd find it in pretty rough shape. That's because the City doesn't maintain it, (THANK YOU! You'll see why in a minute), and no one else typically does, with the exception of N.Y. Roll and maybe a couple of other folks I am unaware of. But mostly it's just me.

Now as for the rest of the Green Belt, well, I figured that the yearly mow/bash/smash maintenance, (if you can call it "maintenance"), had already taken place. Typically the City does their yearly deed in August.The "deed" is brutalizing their way through the Green Belt with an end loader. They push limbs, brush, and weeds out of their way with no subtlety at all. They don't/can't even follow the traditional single track tread that has been there for decades. So, anyway, the whole thing is just a big letdown for me. It's nice to have it cleared for everyone, for sure, but I just wish that the City would be a bit more sophisticated in their methods.

For example, take a look at this image to the left. this is near the Ansborough bridge. This was completely washed out due to flooding earlier this year. No land- nothing. So, the City came in and laid in rock and gravel, packed it in, and made that corner real again. So, there, that was good. I've no idea how that will survive the next high water event, because there will be one. So, it may be all in vain at some point, but for now its a good deal. 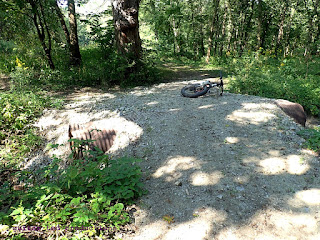 Now here we have a different story. This looks like a great idea, but in reality, this is a problem waiting to happen down the road. I've seen deals like this that the City has done and they eventually will wash away.

Apparently there was an old culvert and they threw it in a drainage, covered it with rock, and packed it in. Now that sounds okay, but they put a pretty rusted out piece in there and they put it in crooked. This looks like a potential washout in the making to me. But perhaps I'm wrong. Hope so.....

Well, all the brutalized clearing the City did made the trail rideable, and I went on my way through copious amounts of sand, (good thing I used the Ti Muk 2), and scree dragged up by the end loader and brush mower, and made my way up toward the Eastern entrance to Marky-Mark. Now I was wondering if maybe the City might have gone and cleaned out Marky-Mark and ruined it by making it ten feet wide. Well, that didn't happen, and I was glad. See, I know that this trail is on their radar, because I've seen it on a couple City maps, (listed with some odd-ball name), so I am kind of happy when I see it in a state of dishevelment. I know that the City doesn't have it on their agenda to work on it.......yet.

My other fear about Marky-Mark is that it will get nixed, or adversely affected by development. Back in 1997 when I started putting that trail in, that area was waaay off the beaten path for development. Now stuff has popped up right across the road from the trail. It would seem that the roadside real estate might be attractive to businesses or concerns needing exposure to traffic. The four lane that runs just within a half a block from most of Marky-Mark is a very busy road these days. Anyway, it hasn't happened yet. 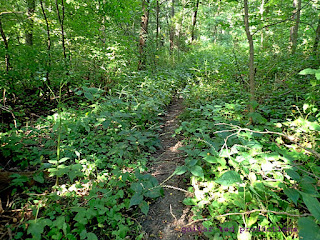 Well, as you can see to the left here, Marky-Mark is pretty weedy. There are a few big old trees down across it, and I managed to clear out a few dead falls and messes along the way Monday, but there is a LOT of work to be done before Winter comes.

And it isn't like I can just go in there with power tools and whatnot to get the deed done. Heck, I don't even own any power tools anyway. So, it's a moot point, but if I did, I wouldn't, because I wouldn't want the attention. So, hand tools, an axe here, a saw there, will have to do to get the job done.

One thing I found extremely odd while I was battling waist high weeds and underbrush was that there is a nearly complete lack of mosquitoes. Not that I am complaining, mind you, but I was expecting the full on attack from those nasties and barely did I hear or see or feel one. Maybe there were two. It was very strange to find the woods this way, with little insect activity. I mean, it's been dry, and every drainage and rivulet that normally runs is bone dry, but that never stopped mosquitoes from existing before. Weird.

Anyway, so the Green Belt is cleared, but there is a lot of sand, so bring wide tires or a fat bike. Marky-Mark is there, but it needs a LOT of work, and so I have my task set to do, and I hope to get to it this Fall. I'd like to make it so we can fat bike through there this Winter and have that loop we can do.
Posted by Guitar Ted at 1:30 AM