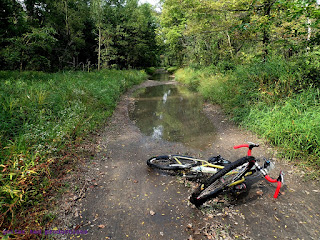 Wednesday I wanted to go for a single speed ride in the country, but I noted that a pretty solid line of thunderstorms was moving through the state. The air was ripe with humidity, and you could tell it was going to rain in the way that the air felt. It was too iffy for me to go out and dodge potential lightning strikes. So, I waffled around and finally pulled out the Fargo Gen I as it needed to have those MSO tires ridden in some more to get the tubeless set up right.

So, I pumped up the tires, got into some riding clothes, threw on those snazzy new RX-8 Shimano gravel shoes, and headed out the door from the house to......

Yeah, where was I going? I had nothing I really was excited about, but I figured I hadn't been to George Wyth State Park for a while, so I headed over in that general direction. Along the way I hit up some good alleys. Around these parts, alleyways are everywhere and probably 98% of them are gravel. I used a bunch of these pieced together to get over to the network of bike paths, over the Cedar River, and into George Wyth. This park has been a mountain biking area for close to 30 years now. I've been around for most of that. It's a very familiar area to me.

Sure, the trails have changed, new ones added, old ones are gone, but Geo Wyth is still that twisty, mostly flat, river bottom single track that it has always been. I see now they have actually posted the names on the trails. Novel idea, that. I dove into one and went for a fair piece until I ran into lots of dead fall. We had pretty harsh winds out here last week and the leavings from the trees are still laying on the trails there, in some places to much too ride through. I cleared a little bit off, then headed in the general direction of the paved path. The thought here wasn't that I wanted to do single track. So, a little reminder was all it took to tell me I had enough of that, and now it was time to find something else to capture the mind.

That turned out to be the Canfield Access road which used to be private, but now is part of the park. It was muddy, ridden with big stretches of water, and......more of an adventure than trying to dodge a million dead branches on single track. I took this out to the boat access and then the Park road to the bike path. Then I headed back home. Along the way I actually learned a thing or two I can write about concerning the Shimano gravel shoes. Bonus. Then it was more alley ways, and eventually back home.

Bike rides are good for the soul, even if you don't know where you are going. Oh, and less than an hour after I got back it started raining. Good timing!