The skies were blue, the fields all cleared, (well.....almost all of them), and the roads were super-fast. It was time to get while the gettin' was good. Saturday started off pretty cold and frosty, so I waited until after lunch when the temperatures were into the upper 40's and the Sun was riding high. As high as the Sun gets a month out from the Winter Solstice, that is.

The respite from early Winter has made for a nice little window of opportunity to get out and ride the country roads a few "last times" before we get hammered by Winter again. Supposedly today is our last, good chance at riding without a storm, or a lot of snow and ice on the gravel for a while, at least.

As I said, the roads were fast. The harvest is almost complete around here now, and the County will not be interested in maintenance until next Spring now. The roads will freeze up, the rock has been pushed into the pulverized limestone and dirt now, and the tracks are buttery smooth in many places by this time. Despite rains and the cooler temperatures, the wind has managed to keep the roads fairly dry. That means my tires didn't push into the road bed, and that meant more speed. At least where the rock wasn't still sitting on top of the roads.

I had swapped out to 650B X 47mm WTB Venture rubber for the Winter, and that wider footprint lends better float, so had the roads been softer, at least I wasn't going to push into that as far as I may have with 700c X 40mm tires. But as I say, the wind made it all a moot point Saturday. And it was windy! In town it was very deceptive. A mere breeze. But out in the open it was a strong, Southwesterly, and I worked hard getting South on the first part of my ride.

This time of the year is interesting to me. In my opinion, it brings us views much closer to what this area may have looked like 150-200 years ago when nothing but tall grass prairie would have dominated the view of humans living around this area. With the crops gone, everything that sticks up off the horizon is pretty much due to the white settlers of the land in the 19th Century. Things like groves of trees, buildings, of course, and utility poles. It's easier to mask those out as you stare outward across the prairies. It must have been quite an intimidating landscape back then, with no real good way to navigate your way through.

I decided that something between two to three hours was sufficient for a ride, so I reached a good turning point, and I went East. As I was grinding up a grade, I heard the scream of an Eagle bourne upon the wind, which was coming from my right, more or less, at that moment. I turned to look and when my eyes caught up, I saw two Bald Eagles in what can only be described as a dance with each other in mid-air. They were being carried along by the stiff wind, only taking brief opportunities to stay aloft with their long, outstretched wings. I managed to grab a shot, then I stood staring at them until they disappeared in the haze along the horizon.

I have heard that in mountainous areas, eagles mate with each other by falling through the air. Was this what I was witnessing? I don't know, but it was one of those times when the beauty and the majesty of Creation had me in tears. I was a mess for a couple of miles afterward. 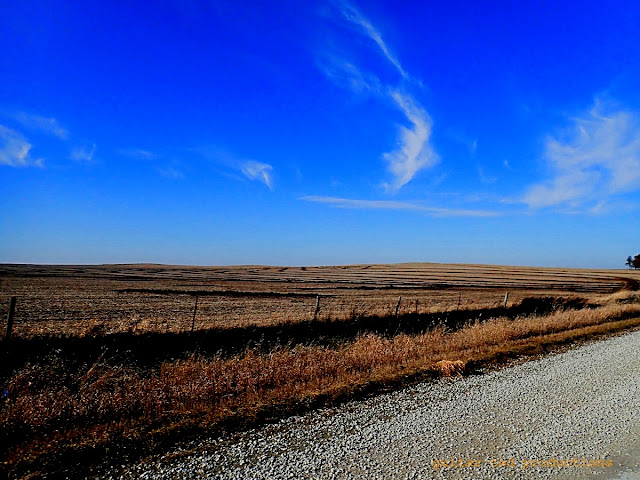 It is for moments like that which I ride. They don't come very often, but when they do........ Yeah, that was good. Really good. The rest of the loop was great too. I saw more cows in the corn, and once back into town on the bike trail, I saw a beautiful red cardinal. Icing on the cake, you could say.

I noted that the bottom bracket on the pink MCD is really grumbly now. Time for a new one! Those Shimano outboard bearing units, while cheap, are not noted to be a very robust, long lasting design. I really don't like how they wear. Usually within about half their lifespan they start feeling weird, rough, and kind of grumbly. I generally put up with that for a bit until they feel really grumbly, like you get buzzed under your feet through the crankarm grumbly. All the while they don't display any wobbly knocking, like when you check a bike for a loose bottom bracket. They feel tight, but they turn roughly.

So, I am going to pony up for a Chris King bottom bracket here. I'll get a purple one, most likely, because, why not? But with money being tight and all, and since I have other bikes, well, this means the ol' Black Mountain Cycles rig is likely done for the year. It may not matter much if we get the predicted snows they have been talking about. So while the gravel gets blanketed in a covering of white, I can always ride the fat bikes I have in the interim.
Posted by Guitar Ted at 1:30 AM

Greets GT, trying to recall if you ride on salted roads much/ever.

@Skidmark- I do ride treated roads quite often in Winter, but I don't know that salt is used much these days. It's that chemical spray that's used most often anymore.

Enjoyed those pics and account. This can be such a great time of year to ride.