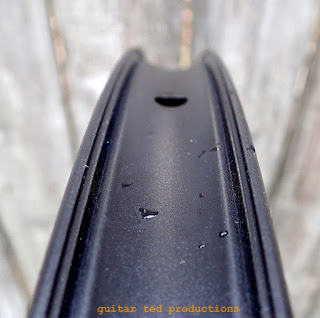 I was chatting with MG just last night via text, and we were gawking at something he's just got in the house. I won't let that cat out-o-the bag, but something else we touched on got me to thinking again about how far we've come in regard to wheels these days.

Thinking back to just ten years ago. 2009 was arguably the year when the 29" mountain bike gained "legitimacy" amongst most mountain bikers. It was not anything but a hard tail, XC, or single speeder's bike, but I think many at that time realized these wheels weren't going away. Only a few manufacturers weren't on board yet, (most notably Giant), and there were legitimate aftermarket and OEM parts for 700c sized mtb's by that point in time.

Wheels, obviously, were the most important thing. But wheels were what was holding the genre back as well. Salsa Cycles had been one of the first to realize that wider internal width rims were going to break out the 29"er as a legitimate trail biking choice. The widest popular rims at that time were the Stan's Flow and similar rims at a 28mm outer rim dimension. We weren't even thinking in terms of inner rim widths at this point.

Salsa's visionary rims were predecessors to the "wider is better" rim movement in the mtb world, but the problem then was that those rims were deemed to be too heavy. Materials technology hadn't been applied sufficiently up to that point on mtb-worthy 700c rims to make them wide, strong, and light. Typical mid-market priced wheels at that time were in the 1600-2000+ gram area and were, again, only 28mm-ish wide.

Recently I got a hold of some wheels to test which are all aluminum and have rims that are 25mm inner width. (We never speak about "outer widths anymore. Sheesh!) They are not very expensive at 800-ish bucks for a set and they weigh 1640 grams for the set. That's amazing for wheels that wide. For about what those cost now, you couldn't get anything in 2009 money at that weight and width. Not even close, and these are gravel road wheels.

Throw some carbon fiber at that. Now we're talking even crazier things. MG has a gravel wheel set coming in which weighs in at 1305 grams for the set. Internal width on those? 30mm!!

Totally agree, it's amazing what they're doing with materials tech now.
Can I venture a guess that you have a new HED set in for review??