Perhaps the most controversial and wildest "gravel bike" ever seen has now made it through production and is available from Niner Bikes.

Dubbed the "Magic Carpet Ride 9" (MCR 9), this bike features Niner's CVA rear suspension in a short 50mm version. It is mated here with a Fox AX fork with a travel rating of 40mm.

It retails in the "5 Star" build (SRAM AXS and high end bits) at an eye-watering 8G+. This then begs a LOT of questions.....

Cool bike and all, but: why not re-cycle an older, FS 29"er design and have a bit more travel, bigger tire clearances, and run a flat bar? Maybe a Jones bar set up?

I can only think of one reason why and that would be a limitation to a MTB drive train. But.....if you were to go to, say a design from pre-2010? Say you had a Fisher Hi-Fi, which featured 80mm of travel, and geometry that is nothing like today's trail bikes. Well.....I just happen to know where one is, and there will be a project bike coming soon. Stay tuned....... 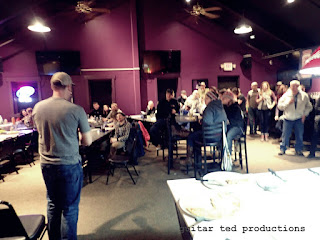 This deal N.Y. Roll and I have put on the last two years is going to happen again in 2020. The "Gravel Expo/Bike Party" was originally an idea to bring the gravel scene to the local riders in the Waterloo/Cedar Falls area. Out of this grew the "Monday No Drop Gravel Ride" which N.Y. Roll has hosted for two season now.

Year Two of the GE/BP brought our idea to feature Iowa gravel events. We brought in several folks and let them present their ideas for their gravel events. This proved to be very popular.

The expo was not without issues, and logistically N.Y. Roll and I wrestled mightily with just how to manage demand, room space, and convenience for all concerned. This go-round we are going with a new idea. We are going to have multiple nights with visits from Race Directors and a little bit of information sharing. We have a new venue in the works for the expo, and we have a brand new sponsor for the events.

We're working on details now, but the general idea is that during the dead of Winter, (think mid-January to late January or early February). We are thinking either mid-week night or weekend, or a mix of both. Four sessions, as of now. Expect about 90 minutes for each.  Again, a lot of this is in flux. Stay tuned......

Wednesday news broke on the web that World Tour Pro and American rider, Peter Stetina, had decided to quit the World Tour and focus on gravel events and endurance MTB events for 2020.

Citing his excitement and a renewed passion for racing stemming from his racing in the Dirty Kanza 200 and Leadville 100 this year, Stetina is going to go it alone as a privateer racer for 2020.

Comments: This is a huge blow to the profile of road racing in the U.S. Add in that the Tour of California was cancelled for 2020, and one can make a strong argument that serious cracks are evident in the road racing scene in the US. In fact, the signs have been there for several years that something was amiss.

Younger riders have abandoned road racing here, and bicycling in general. So, the road scene was suffering from "aging out". Secondly, the gravel scene has cannibalized whatever was left. Several years ago now, (and I have mentioned this several times here on this blog), it was reported that USA Cycling (USAC) was losing revenue from licensing at an alarming pace. Many Continental and former road Pros took up gravel racing then. Riders like Ted King, who won the DK200 in 2016 (Image shown at left here)

USAC made some half-baked overtures to the gravel scene in the last few years, but now with the cancellation of the biggest road event on the continent, and with current Pro Tour riders looking hard at gravel, (you can bet Stetina isn't the only one), it would appear that the "red alert" has been issued by USAC as a rumor is floating around that they are asking many gravel event promoters and top athletes to meet in January. Furthermore; it has also been mentioned to me that the UCI, (Union Cycliste Internationale) is poking around and will aim to set up a series for Pro riders on gravel

Who are these people, if the rumors are true? My guess is that since Life Time wants to expand to six gravel events, and since they own the DK200, and since that single event is the most well known of the gravel events in North America, that Life Time and their gravel promotions folks are going to be at that table. Probably others as well, but certainly, you'd be nuts not to talk to Life Time if you are USAC/UCI.

This will certainly only be a North American phenomenon at first. The Euro folk are not at all interested in going this direction. It isn't hard to imagine that the "gravel road scene" could be a big deal for USAC, though.  It could have potential for possibly bringing their mission into a more relevant area of cycling than paved road riding.

Cheers folks! That's all for this week. Get out and ride those bicycles!

Didn't there used to be a steel hardtail Niner MCR?

@Tyler Loewens- You are correct! I did some searching and the original MCR 9 was a steel 29"er hardtail, geared only bike Niner offered around 2008.

I almost bought an MCR 9 back around 2009, came in a mouth watering red color and had those sexy skinny steel tubes. But just like this MCR 9, it was way more than I wanted to spend on a bicycle at the time.

As for USAC, I for one would love to see that collective of asshats just go away. Karma might have taken her sweet time coming around but in the end she always gets the last word.

Cool, the Titus Racer-X is back!

Oh! You had me at project bike! Looking forward to it!

I've been using my 2009 full-sus Specialized Epic mounted up with 700x43 Gravel King SK's on i18 rims for all my Gravel riding. Full-sus is great on Gravel. The MCR is way too expensive! Better off buying a budget full-sus XC bike like the Canyon Lux than buying an MCR.