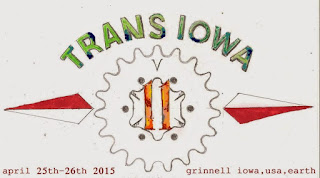 With this post I will conclude the mini-series regarding registration for T.I.v11.

The registration for the 11th running of Trans Iowa was held in November of 2014. A typically cool, dry week was marked by cloudy skies and little activity on the bike trails and single track surrounding the Waterloo/Cedar Falls, Iowa area where Europa Cycle and Ski was. In an otherwise dead time of the year, an electric, tense situation arose surrounding the final push from the "Rookies" to get their postcards in for Trans Iowa.

The shop was where I always had post cards sent to. I also allowed that these cards could be personally dropped off, avoiding the USPS or overnight courier services. This was originally allowed as a nod to the local riders so they could be enticed to come and ride in the event. I assumed for years that no one further out than, say, Des Moines, or Cedar Rapids, Iowa would ever bother to think about driving up an entry, and even then it would likely be in conjunction with another, much more important reason to be traveling through the area. But in 2014, my understanding of this was blown right out of the water.

I knew from messages and questions that a LOT of Rookies- those riders who had no experience in any Trans Iowa- were going to try to get in. I had questions about letting pairs of people in, or groups, which I could not guarantee, and other questions about dropping off entries. But nothing could have prepared me for what I encountered on Monday, November 10th.

I came into work through the back door, as usual, and the book keeper said that I had a line waiting outside already! I took a look and at least ten people were milling around outdoors waiting their turn to hand off a card to me. More people showed up as I got settled in, and by 9:00am quite a throng had assembled already. We let them in early. I had about 40 spots for Rookies and half were taken by the waiting throng and by some over-nighted mail. Delivery vans dropped off plants and flowers with registration cards attached, and more people were driving up to drop off cards. It was mayhem!

Shockingly, I had one fellow ride his bike from Dubuque, 90 miles away! He counted it as Trans Iowa training, and turned around and rode back. Another driver came from an hours drive South of St. Louis Missouri, nearly 400 miles away, just to drop off a card. Another guy came too late, after 30 hours on the road!

The registration was over in 30 minutes. The year before the Rookie Class took 4 hours to fill up. It was crazy. I had so many plants with cards that I had to go through them several times to make sure I didn't miss anything. One pair of plants, separate entries for two guys that wanted in to ride together, were messed up by the delivery company. They got one card- not two- and so I had multiple phone calls back and forth with an increasingly frustrated and angered gentleman who could not believe I wasn't the one that screwed things up for him. Ultimately neither one rode the event.

There were other frustrations as UPS came far too late as did the USPS for well over 20 people to have had any chances. I even got "over-night" letters the following day! Several, as a matter of fact. This only served to make people question my methods and calls of unfair processes and that I should roll over and let everyone in were being made loudly on social media.

The fun, exciting times of registration were clearly over. This was a complete nightmare. I was very concerned about many aspects of this process and felt horrible for many days afterward. Not because people did not get in, but because people showed me that they were willing to risk life and limb for a stupid, free gravel event like Trans Iowa. I mean, riding your bike at night for 90 miles just to hand me a post card?!! Driving hundreds of miles, risking accidents and wear and tear on the car- not to mention the costs in fuel- to just ride gravel in Iowa? This was too much for my sensibilities.

Remember my saying? "Never underestimate the stupidity of Mankind"? Well, it hurts a lot more when you realize that the "stupid" was motivated by something you are doing. This is why I felt really bad. Changes were not only coming, but necessary, if I ever were to run a Trans Iowa again. It was eminently clear to me now that I had to utilize some other means to fill the Rookie class. A lottery was contemplated, and even using 'qualifying events' was a consideration. One thing was for certain, I could not accept registration via a drop-off any longer. No more 'gifts' either- that was getting way out of hand.

In the aftermath of registration, it took several days to calm down the anger and frustrations people had. I ended up writing a post to generally answer many of the questions I was getting about it all. At the end of that post I guaranteed that due to such high demand that I was going to actually make it harder to get in a future Trans Iowa, not easier. My thinking was that in times of high demand and short supply, (spots available to riders) that the 'price' to get in has to rise. Since I wasn't charging money, the 'price' had to be in the process. This is why many Trans Iowa riders afterward said Trans Iowa was too hard to get into. The registration for the Rookie Class of T.I.v11 was the reason why.

Fellow Slender Fungus member Hellmut drove from Chicago to drop off his entry. People wanted to ride TransIowa. They knew it was hard, they new it was special and wanted to be part of the history. There wasn’t anything like it at the time and never will be.

Mark, this is totally off-topic, but thought you might find this of interest: https://www.cyclevolta.com/story/emobility-news/measure-proposes-ebike-tax-credit/?utm_source=internal&utm_medium=email&tp=i-1NGB-Et-TLf-1G9g9Z-1c-18x6-1c-1GA5MO-l5hokNQfxj-1I7gyy