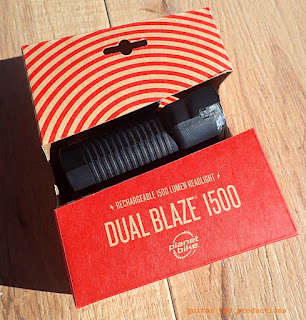 Today I want to start the review of a light from Planet Bike, the Dual Blaze 1500. Right up front I want to make it understood that I was provided this light to review by Planet Bike and I will point you to my Standard Disclaimer page for reference regarding that point.

The LED light technology changes continue to amaze and the Dual Blaze 1500 is no exception. The two Nichia NVSW319BT emitters are powered by Samsung's 5000 mAh lithium ion battery to give you up to 1500 Lumen of lighting power at a retail price of $100.00 USD. That's crazy!

It wasn't all that long ago that a 1500 Lumen bicycle light, if you could find one, was well over that price and it had a ginormous external battery pack. (I have such a light yet from around the early twenty-teens) And that was for a bargain priced, Chinese made, internet only option.

Now this Dual Blaze light is a self-contained unit with USB charging and a light weight for the entire unit in a compact package. Obviously, at this price you are not getting all the bells and whistles that maybe a more expensive LED unit might have, but if you are looking for simplicity and if you are on a budget, this is a great light to look at. 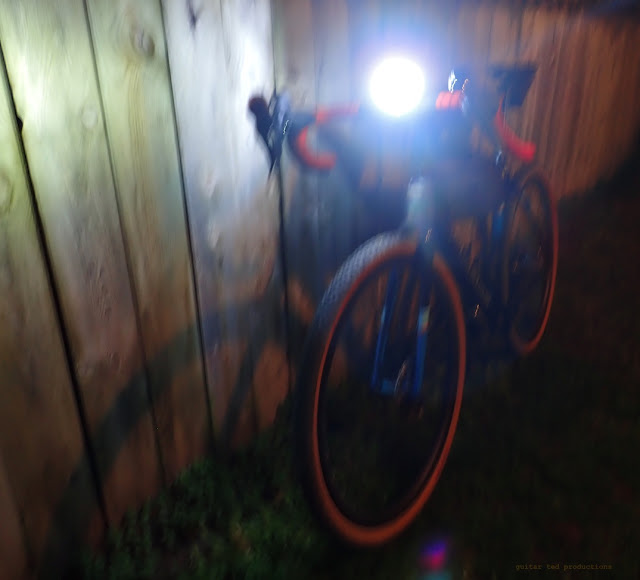 Features: Provides 275° of visibility with side lens, water resistance rated to IP64 standard, and weighs in at 185 grams.

First Impressions: The Dual Blaze 1500 is about 10% smaller than a recently reviewed 1600 Lumen light I tried and it is obviously lighter in the hand than most lights with this sort of power. I'm not sure where the weight savings is coming from 100%, but obviously, the plastic housing is saving some mass here. Most lights in this category have metal housings for better heat dissipation. More on that in a minute....

The Quick Twist mount was not hard to figure out. It utilizes a slip joint to accommodate several handle bar diameters. Pretty clever that. Once you get the proper setting it is easy to tighten the mount for a secure base for the Dual Blaze to sit on.

Once again, I should remind you that this light cost $100.00 bucks. The fact that it doesn't feature a lot of things higher priced lights do should come as no surprise then. For instance, you do not get a mode indicator. You do get a nice On/Off button that tabs through the four modes. The button also seems to glow in the dark slightly, making finding it easier.

That button turns on and turns off the light easily by holding it down momentarily. It is maybe the easiest button to use on a light of this type I've ever tried. Many lights have fussy On/Off/Mode buttons that are a bit frustrating. The bad thing about a button that is easy to use? It could turn on at an unwanted time in a bag, or when stored in luggage. To avoid an issue with this you must put the light in "Lock Mode", which is attained by holding the button down for 5-6 seconds at which time the light will flash quickly several times to let you know you've got it locked. Do the same procedure for unlocking the light.

By the way, the button flashes a blue light when charging that goes solid blue when the battery is topped off. If you get too low on battery power the button will glow red indicating a 20% power level reserve is all you have left.

Another 'hidden feature' was that the light unit swivels on the Quick Twist Mount slightly, maybe a few degrees. But that is all you need to get that beam pointed in the direction you want and could be a great feature if your bars sweep backward after leaving the stem clamp. 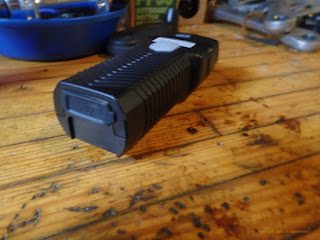 Once I had the mount secured on my handle bar the Dual Blaze was easy to slide into place. I have to say that it doesn't give you a reassuring "CLICK" or provide any resistance to give you a feeling that it is locked into place. A gentle tug on the light head did show I had it on there well enough though.

Quick Ride Impressions: I received this light in April but we had such cold, windy, and wet weather that I put off trying the light out until now, and of course it feels like Mid-Summer out there now! Anyway, my initial impressions are good. The 1500 Lumen setting was a bit of a surprise in that it did not just wash out the features I would look for while navigating a gravel road. There was a nice flooded area of light to see by and spill-over was wide enough to illuminate a broad swath of roadway. Throw was good enough for fast riding too.

One thing I noted was that at the highest setting, the casing got pretty toasty. Perhaps this is a compromise for getting that lighter weight plastic casing in lieu of using a heat dissipating metal casing. But whatever the case may be there, I found that the high setting was throwing off a decent amount of heat to the point of maybe being too hot for sensitive hands.

On Medium the light was okay for general gravel travel, I thought, and it ran noticeably cooler. This 800 Lumen setting was what I was most interested in checking out. This is where I would use the light most often. Especially since you get a claimed six hours of ride time in that mode. Plenty for my needs. 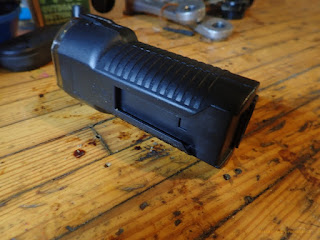 Interestingly, the light 'temperature' or 'color', was not that blinding bluish hue, but a warmer, almost yellowish tone, much like old automobile headlamps. It was easy on the eyes of this old man, if not all that impressive. That harsher, bluish light makes an impression, but it gets fatiguing to look at after a while, in my opinion. So, this "800 Lumen" of light wasn't going to wow anyone, but it might be better in the long haul than something which seems to have more punch, but is less kind to the eyeballs.

I did see some mild artifacts from the lens on High beam, but this seemed to disappear at Medium. By the way, Low beam was essentially a commuter, "I am here" light, in my opinion. Not really all that great at first glance, but I'll try it some more before I fully pass on that mode.

So, there is what I think so far. I plan on taking this out for a longer gravel ride and directly comparing it with the light I used for my Tour of Black Hawk County last year. Stay tuned for that and more on the Dual Blaze 1500 soon.