I just posted my Showers Pass Century CC rain jacket review this week on RidingGravel.com. (Standard Disclaimer) It's probably the most comfortable rain jacket I've yet tried, and I've been sent many to check out over the years.

Showers Pass was the rain jacket to have back in the early days of Trans Iowa. This was in the time before 'gravel' was a thing, and racing in rain jackets was thought to be done only in one of those mimimalist 'rain capes' which were pretty much clear plastic bags with a hole for the neck, two plastic tubes for sleeves, and a Velcro closure instead of a zipper. Gotta be able to read the sponsor's names emblazoned on yer jersey now!

But touring cyclists were all about the effective, versatile rain gear for cycling. That's kind of where Showers Pass made its hay early on in its history. And subsequently when Trans Iowa riders were looking for that good rain jacket, the Showers Pass jackets were discovered. I remember talking with some of the early T.I. riders about what they were using, and the Showers Pass stuff came up often and got good comments from the folks using them.

I had aims to buy one of their Century jackets for quite some time, but I had never gotten around to it, mostly because I was getting sent all these other jackets to try out. But recently Showers Pass came out with a budget priced version of the Century Jacket dubbed the Century CC, and I am now finding out what all the fuss was about. Showers Pass says a new version of that stalwart Century is going to be coming out. It might just be another great one for poor weather gravel riding. 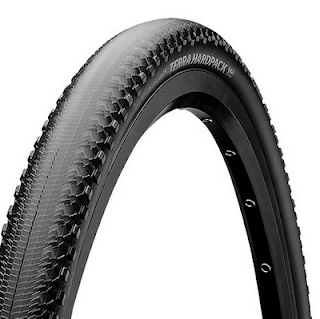 Continental, the German based tire company, have announced a new tire called the Terra Hardpack..It is a 50mm wide tire with a unique, low tread pattern for gravel, smooth dirt, and rougher roads.

According to reports, Continental is also offering this in a 650B X 50mm size, but there are no other sizes available at this time. No pricing was found at this time either.

Comments: Continental has always been a conservative company when it comes to stepping into new markets, so this late entry into the bike packing/wide gravel realm is not surprising. The Terra Hardpack has an interesting, almost scaly looking tread. My experiences with Continental have been that their tires often do not come out to be as wide as stated, so if that still is the case, this may fit into more bikes than you might think.

In a world of parts shortages it is always interesting to find a new option that is actually in stock. Such is the case with a new flat mount disc brake option from Velo Orange called Growtac Equal Flat Mount Disc Brakes.

These single-side actuated, mechanical disc brakes calipers come complete with hardware, adapters for the front, cables, housings, ferrules, and come in several anodized colors. The calipers weigh in at a claimed 135 grams each and do not come with rotors. Price is listed at $350.00/both wheels.

Comments: I was looking for flat mount disc brakes the other day and there were not many choices out there. This adds another interesting choice. The price might seem high, but you get everything you need minus rotors. (And good luck finding those!) But still.... You can get hybrid cable/hydraulic Juin Tech brakes for less. Those do come with rotors (six bolt though) and no cables or housings, but even with that you'd be well under $350.00 for both wheels. I mention these Juin Tech's as they are identical to the highly touted Yokozuna hybrid calipers and they work really well.

A news announcement came out this week saying TIME Bicycles were again available in the USA. TIME has a new gravel bike they are excited about that uses a new lay-up of carbon mixed with Dyneema fabric for more strength and vibration reduction.

Comments: This is a great example of some pretty cool ideas with a couple of fatal misses in design and geometry. First off, TIME specifies that the ADHX is good for tires from 38mm-40mm. What? Have these designers not seen what has been going on around them for the past five to seven years? A 'new' design that can only handle a 40mm tire is pretty much 2012 technology.

Secondly, they have a great bottom bracket drop, but the head angle at 72.5° for a Large is waaay too steep! Again- it smacks of a geometry chart dredged up for a gravel bike made in the early twenty-teens. I fail to see how this bike would be really great at anything other than rough paved roads and very smooth dirt. But yeah.....racing bikes. I hear ya.

Thanks for reading Guitar Ted Productions! I hope that you all can get out for a ride or two this weekend!

1. I was just wondering if continental was going to update any of their tires or release new ones. I think one looks promising and would be great for the BC Epic 1000 in Canada.
2. Not all gravel bikes need to handle big chunk Iowa gravel. I have rode gravel that has a solid road base and the constant relaying of gravel is not needed, and the road bed is solid and that leads to a lest textured surface. Iowa gravel roads are not exactly built the best. A lot of time was not put into building a solid road base and thus reducing the need for constant resurfacing. So the TIME ADAX makes sense to me for their intended target and a frames north of $3,500k tells me the design guy wa targeting a exclusive club of riders. But then again, Salsa once claimed we could not put 29x3.0 in the carbon bear grease frames. And then two years later updated their wording to say it was capable. So what is on paper is for covering their bums and what is reality is another story. I imagine it can handle a 42 or even a 44.

That Continental tire looks like it has a similar tread pattern to their 29x2.2 (700x55) Speed King Race Sport, which is what I have run for years on my Gen 1 Fargo as a street/pavement/light gravel tire. Those measure a bit over 55, almost 56mm wide at the widest point on 23mm (ext) rims. Super fast rolling and quiet, but pretty thin. My only flats, however, have come from a piece of wire picked up on some pavement and some big tree thorns when I was on a paved rail-trail with a full touring load. No issues on dirt or gravel, luckily, and I am 230#. I am excited about similar tire in a 50 with a little more robustness for my Straggler. YMMV

@tntmoriv - Thanks for that perspective. I hope that Conti has been making their tires to come out as advertised in terms of width, but I ain't holdin' my breath!

This new Conti tire reminds me a bunch of the WTB Venture tread pattern. I like that tire, so i bet this Conti tire would be great on my Fargo!