A Historical 29"er Document (For Geeks Only!) 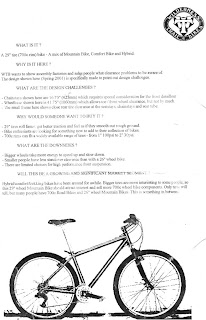 I've always had a soft spot in my heart for history. I guess it goes back to my love of stories, and it doesn't get anymore real than history, but anyway..........

Here we have a document that was posted up on mtbr.com's 29"er forum by an individual that said he dug it up out of his parts bin. It was handed out to product managers to help them understand this new category of bikes, and probably to help WTB sell off that first batch of Nanoraptors that they had made only two years before. This wasn't meant for consumers.

It is interesting to note the lack of hype in the message. It is a pretty straight forward statement on what to expect from a 29"er circa 2001/02. Beyond that, there are some things that I found rather interesting and noteworthy.

#1: Under the heading, "What Are The Design Challenges?" we learn that the image of the bike on the flyer is an image of a prototype 29"er built in 2001. I have read that WTB had a couple bikes built to have WTB people ride for testing. Perhaps this is one of those? Note the chain stay and wheelbase figures. You know, there are a lot of folks that would go nuts for those figures on a 29"er today! That's short!

#2: Under "Why Would Someone Want To Buy It?" we find a statement that skinny rubber can fit, making the bike more versatile. With recent specialization in 29 inch componentry, that is a qualified thought these days. See my recent Twenty Nine Inches post for a 2009 take on that subject.

#3: I thought the downsides portion was fair and to the point for 2001/02. Of course, advancements have been made, so a couple of those bullet points no longer are concerns.

#4: Finally, in the last statement, I thought this was very interesting: "Only time will tell, but many people have 700c Road Bikes and 26" wheel Mountain Bikes. This is something in between." Something in between, meaning part road bike, part mountain bike. That is exactly the train of thought that was pursued in the early 90's by Bianchi, Diamond Back, and a couple of other companies for their "hybrid" 700c mountain bikes. The very term "hybrid" comes from this philosophy on these early larger diameter wheeled bicycles meant for mixed terrain riding. It would seem that the author of this flyer (Mark Slate?) had still been trying to communicate to the product managers in this generally accepted way.

In a refreshing way though, I've got to hand it to whomever wrote this for the complete lack of any whiff of "zealousness" for the wheel size/tire format. Just a straight ahead take on what it was at the time. Nice. Some folks should take note of that in their own promotions of alternative wheel sizes.