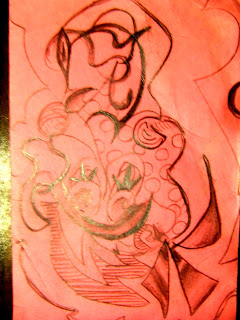 Today we rejoin the "Beg, Borrow, and Bastard Tour" in Stevens Point, Wisconsin as Troy and Mark leave to look for Steve......

<====Artwork by "Dave The Skateboarder"

So, we took leave of Dave The Skateboarder and went back to that corner bar to get Steve. When we arrived, we found the bar in "full court press", full of college kids and loud music. We asked about Steve at the bar, but apparently the shifts had changed while we were gone. No one seemed to recognize his description. Finally, someone came out of the back to say that they recognized our description of Steve and that they thought he had left some time ago!

Needless to say, Troy and I were in panic mode! We rushed outside to grab our bikes, wildly throwing out ideas and theories as to what had become of Steve. Just as Troy was pronouncing some unrepeatable malediction against Steve, I spied his bike across the street in front of another bar.

Relieved, we walked across the street and entered the bar. Our feelings of relief were short lived though. As I walked in, I noticed a bar with large, powerful looking men in work clothes seated around it. One of them immediately motioned me over to himself. 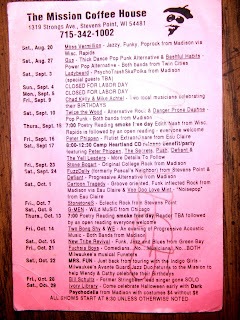 <===The opposite side of Dave The Skateboarders art work.

As I approached he asked, "You know that guy?", as he pointed with his large man-paw in the general direction of an open area by the bar. I didn't need to ask him who he was talking about. I saw him immediately, wavering like a willow in the wind. It was Steve, being very loud and giving some guy some grief about something or other. Umm.........this wasn't good, not at all!

The large man spoke to me again, "You better get him outta here......NOW!" I could easily see that the request was not an optional one. The anger was palpable. I perceived that Steve was only moments away from something ugly. Really ugly!

Troy was incensed and I decided to get him out of there to wait for Steve and I outside. I tried talking Steve out, but he would have none of it. "I'm already in a bar!", he snorted, "Why do I need to go to another one?!!" Steve was apparently proud of his ability to slight these men without their reacting. What he didn't realize was that they could turn him into a wadded up mess in a heartbeat, and they knew it. It was only their strained capacity for mercy that was saving his bacon at that moment.

The patrons and the bartender started in on Steve then, telling him to get out. This only made Steve more obstinate. Things looked to be reaching a breaking point, when I suddenly had a plan. Now I'm not one to intentionally mislead folks for my own personal gain, but this situation called for desperate measures. I blurted out to Steve, "Hey, this bar has topless waitresses! The gals are naked!"

What can I say? Sex sells!

Steve backed down immediately, seemingly interested. I took the opportunity to get him out the door as fast as I could. Once I got out the door, I gave Troy the "high sign" and he caught on and played along like a champ. We escaped! Now it was back to The Mission Coffee House to see if Dave The Skateboarder could help us. When we got there, Steve wasn't going in because it wasn't the topless bar, obviously. So we had to have Dave come out and he graciously gave us detailed directions to the area where we could find the "topless bars", (Motels and Hotels!).

Now we were on our own, with a very inebriated Steve in tow. We had two or three miles on four lane streets to get there. Fortunately, the streets were quiet at this time of night. Steve was having control issues now, spontaneously swerving across two lanes of traffic without notice and miraculously not dumping it. After he narrowly missed taking us out, we put him behind us, and fretted about him the rest of the way.

Once we got out to the area where the motels were, Troy and I picked one out and rode up to it. Steve figured out what was going on now and would have nothing to do with it. He wanted to find these "topless bars" or whatever. Troy told him in no uncertain terms that he was on his own, we were going in to sleep. I tried to reason with him, but Steve mounted up and rode away. We turned our backs to him and walked into the motel, secured a room, and hauled our heavy touring rigs up the elevator to our place of rest. After some reflection on the evenings happenings, we turned in, not knowing what had become of our traveling companion.