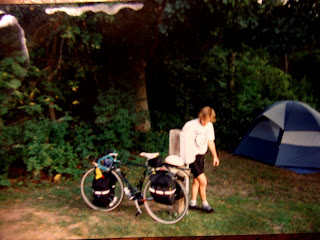 Now entering Day Four, The "Beg, Borrow, and Bastard Tour" awakes to a soggy situation....
Today's picture is of Troy checking out his parking job at the Old Barn campground at the end of Day One.

Sometime during the night, I sort of realized in a sleeping stupor that I was getting rained on. I moved towards the wall of the church. Ahh! Then about an hour later, I had to move again. No big deal. Then about another hour later, I had to move again! Up against the wall now, no more room to move! I kept scooching up against the wall until it was useless, and I got up to check on Troy. Thunder could be heard in the distance. It was raining heavily now with the wind blowing steadily out of the East, right into the wall of the church.
Steve heard me stirring and stuck his head out of his tent. "Sucker!", he said sardonically as he darted back into the dry confines of his tent. Troy got up then and we went about packing up our soggy sleeping bags for our days trip. At least our bikes were dry for the moment, and our tents were too.
Finally the rain gave way, although the skies remained gray and menacing. It didn't look promising, but we decided to get going as soon as possible, since we had no idea how long we had until it started in raining again.
Well, we didn't have long to wait for that answer as it started in raining again just as we were pulling out of Nekoosa. Then before long, we were all soaked. Well, I am one to think that once you are soaked, you can't get any wetter, so I was good to go. Not so with Troy and Steve though. They were not happy campers! As soon as we entered Wisconsin Rapids, not more than seven miles up the road, we halted where Troy and Steve had spotted a shelter house in a park by the Wisconsin River. It was cold, we were wet, and not motivated to move anytime real soon. The rain fell so hard here that the sky looked all grey and we couldn't see across the river.
After awhile, the charm of the park grew old and we knew we had to move on. The rain seemed to have let up. We saddled up with the goal of finding some food. Not far up the road we found a busy little restaurant where we were seated as far back by the kitchen as the wait staff could get us. I didn't blame them at all since we were all wet and dressed rather oddly.
After some good grub, (even Troy was pleased!), and a laugh or two, we found our way to a local bike shop where Steve wanted to buy some full finger gloves for his shivering hands. At the shop we asked about our route. Green Bay would be the shortest distance, but it would also have the worst possible traffic. It was decided that we should bear north of there to Marinette which would take us through quieter back roads.
Leaving Wisconsin Rapids, we were told to go out on Highway 34 to a cut off to a County P. Then it was about 17 miles to Stevens Point. Well, we were a little fuzzy on the distance to the cut off. We got to a point that made us feel we were too far down the road, so we turned back to look for the turn off. We ended up back in town and we were getting panicky. I got separated from Troy and Steve at one point and thought I had lost them. Finally, we got turned around, went a little further up the road, and found the turn off. We were all feeling some pressure to salvage what we could of a "wasted day" in terms of miles, so we pressed on hard now. We had only put in about 20 miles. It had quit raining for the time being, and we had a clear path in front of us.
That enthusiasm was dashed when it started in raining again. Troy and Steve were dejected. I actually found myself leading them for much of this stretch. I thought it pretty amazing since these guys were seasoned cyclists. Here I was, leading them up the road, and at a pretty decent clip too. I think rain doesn't quite have the effect on me that it does on others, but who knows?
I do know that Steve and Troy were really glad to roll across that bridge into Stevens Point. They both were frustrated and were ready to stop. It was around 4pm when we spied a corner bar, and it was agreed, even by Troy, that we should stop and go in. Apparently, beer was the antidote for a bad day on the bike. We found a safe place to park our bikes and walked in hoping to assuage our sullen countenances.

Stay tuned for Part II of Wet, Wild, and Wonderful next week!
Posted by Guitar Ted at 1:00 AM