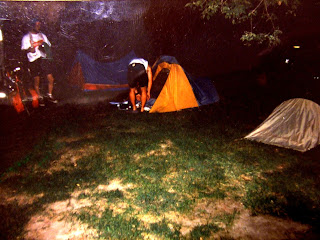 Today the "Beg, Borrow, and Bastard Tour" is mired in wet weather and sheltering in a college town bar. We pick up the action there, but first: Today's photo is from The Old Barn campground again. Troy and Steve are getting ready to hit the hay.

The Steven's Point Debacle. Yeah, this part of the story could stand on its own. It was the defining moment of the tour. A point where we all found out some things about each other.

It all started in that college town bar, the name of which isn't recorded. It was as different from The Cranberry Inn as night is from day. We all felt much more at "home" here, that's for sure. It was still early in the evening, so the place was pretty empty. We learned about the special where if you drank six pitchers of beer, the seventh was free. (Gotta love college town marketing!) We said we'd go for it. I'm sure that the bartender didn't think the three of us could pull it off, but he didn't know us!
About six o'clock, and well on our way to pitcher number six, it was determined that we should eat something. The kitchen was closed, however, so we asked the bartender to allow us to order in pizza from Domino's. Now I was sure that this wasn't right, not until I saw the astonished pizza delivery man drop off our steaming hot pie! Weird!
After the pizza was long gone, and we had triumphantly polished off the free seventh pitcher of brew, we decided we had better find a place to stay the night! It was getting busier in the bar by now, and Steve had a mind to hang out longer. Troy and I had concerns about lodging; however, so we set out to do our own "information gathering" without Steve. We ambled out of the door into the dank, wet night. We found our bicycles, mounted up, and headed off in the direction we thought was most likely for finding lodging.
The street was strangely devoid of traffic, quiet, and the night sky was black. Suddenly a strange higher pitched rumble could be heard in the distance. I looked up to see a figure piloting a skateboard with a backpack on. The individual was going right up the middle of the street towards us. As the skateboarder approached, I heard a voice hail us, and we stopped. It was a young college aged guy. He asked us what we were doing, and when we said that we were bicycle touring to Canada, he was impressed. Troy asked him about hotels, and he said that we should follow him to another local hangout, where he might score us free lodging. He said his name was Dave, and took off down the road with us in tow.
The joint was called The Mission Coffee House, and it was full of college aged people. Inside we were met with lots of friendly smiles and questions about our trip. Our "host", Dave the Skateboarder was busy trying to secure lodging. We were busy chatting in our alcohol induced hazes. We were oblivious to the outside world and enjoying ourselves immensely.
Now I'm not going to pretend to know the details of this time at The Mission Coffee House. I will say that for whatever reason, it was as if we had walked into a modern day Never-Never Land. We lost all semblance of responsibility and time stood still.....or it seemed to. I have no idea how long we were there, but it seemed like a very long time. Without scoring any overnight accommodations, we thought we should go get Steve and bring him back to The Mission Coffee House because it was such a cool place. So we took our leave of Dave the Skateboarder and our new acquaintances with a promise that we would be back with our traveling companion.
Next week: The final installment of Wet, Wild, Wonderful! where we narrowly avoid disaster only to lose one of the crew!
Posted by Guitar Ted at 1:00 AM