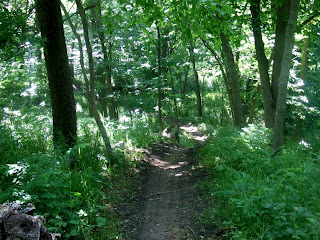 I spent the greater part of my vacation in Bellevue, Nebraska with friends. On Thursday I was unexpectedly blessed with the chance to hit up nearby Swanson Park. It has a perfect course for single speeding, and the track is a blast to ride. So much so, I did it twice! 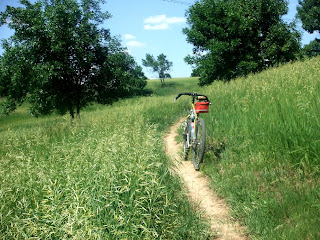 <===Tall grass prairie on the Fargo in Swanson Park.

The trail winds its way up on to this reclaimed dump that was turned into tall grass prairie.
It was a cool contrast to the heavily wooded single track elsewhere in the park.

The loop was fairly well marked and was about six miles in length. Nothing too technical, mostly fast, flowy single track. The down hill off the prairie hill is a treat and the back half of the loop is roller coaster trail heaven. Fun!

I was supposed to wait and hit this up with MG, as I posted on Friday, but I couldn't wait, and it actually opened up an opportunity to hit up another local "gem" of single track. So, on Friday, after MG actually found me, (a whole 'nuther story there!), we decided to go look for Jewel Park in Bellevue. 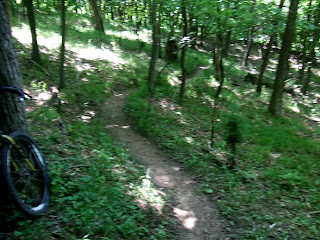 After wandering around for an hour and a half, (really!) MG and I decided to stop doing the manly thing and we broke down and called in for directions. Once back on track, we found the park entrance, downed some grub, got dressed and hit the single track........up!

Jewel Park kicks off with a steep, tight, switchback-like climb that puts you up on top of a big hill. Then you are off camber, running in and out of ravines, and negotiating tight corners with short steeps and a plentiful helping of roots. This short, four plus mile loop reminded me a ton of Decorah, Iowa with it's toughness. It really worked me over, and I begged off after one lap knowing we had the main course on tap yet for later in the afternoon. 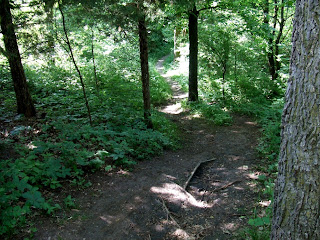 MG had in mind to take me to Platte River State Park about a half an hour south of Bellevue along the sandy Platte River. We arrived shortly before our meet up with Kyle from the parts of Nebraska where the next Big Wheeled Ballyhoo will be held.

He pulled out his beautiful Turner Sultan and we set out to see what Platte River was all about. There was a bit of everything, and a lot more climbing too! It seemed that there was nothing flat out here at all. The trail was well marked, cleared, and tough as nails. Lots of punchy climbs, fast technical descents laced with roots and drop offs. Of course, the rigidness that is a Fargo may not have been the best choice for this, but it did the job, and it was all I had! 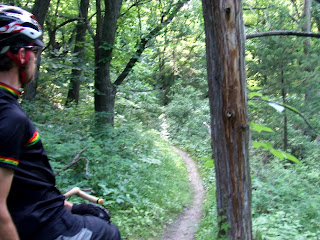 <=== MG surveys the thin thread that is set out before us.

The trails were tough, but this single track is a blast to ride. It will call up all the skills you have to make it through. Climbing, descending, picking the correct lines, cornering, and just being "on your game" will all be skills that you will hone if you ride here. I will come back some time, because this trail will definitely make me- or anyone- a better rider. I know I'm better for having been on it.

It was a thick aired, warm, sunny, perfect day to ride. We stopped in some open prairie for a bit to hash over some stuff concerning the Ballyhoo, and we headed out for the final sections of single track that would lead us out to the cars. On the way, there was a tricky ascent that made MG hesitate at just the precise moment I needed him to clear the space he was in. I stopped, tried to catch my balance, and went over to my left, falling about 7 feet into a hidden log right on my left arm. MG and Kyle quickly extricated me from my bike and the underbrush. I had merely bruised myself, but it wouldn't be until the next day that I discovered I tweaked my back a bit in this fall.

I should be okay, it's just real sore! Well, with that accident, we headed out with no other issues and made it back to the cars and some well deserved beverages. 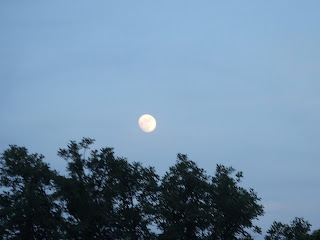 <====The moon comes up over Platte River State Park after a glorious day of riding Nebraska single track.

MG, Kyle, and I had a great time, great conversation, and were totally worked over after a great day of riding. If you think Nebraska is flat and boring, you are totally missing it. The three places I rode are not even the total amount of trails in the area either. There is more, and some day I'm going back to bag some more killer Nebraska single track.

Thanks go out to The Dettmer Family for hosting my family, Matt Gersib, Kyle Vincent, THOR, and anyone else involved in the trail maintenance out there. Last but not least, thanks to Mrs. Guitar Ted for letting me do this on our family vacation.
Posted by Guitar Ted at 5:32 PM