Interbike 2009: It's The People That Make It Cool 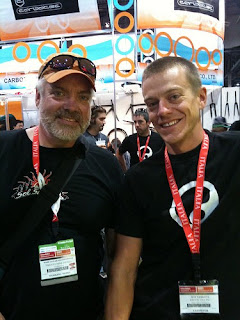 Interbike is in Las Vegas, which makes a lot of us Interbike-a-lopers a bit tense. Vegas isn't really a very savory town, it is an icon of excessiveness and waste, and to get anything done there is expensive and maddening. Yet Interbike can't really be consistently held in a place without lots of available hotel rooms, and a viable, good weather location for the Outdoor Demo. So it goes.......
Here's my take: It really doesn't matter all that much. Why? Well, besides getting ripped off by The Sands, which I don't really see any good way around, you just focus on Interbike, and more specifically the people, and Las Vegas fades into the back round.
If you do that, and spend as little time as possible in the area of The Strip, the whole Las Vegas deal is pretty much marginalized. It's still there, hanging above your head, invisible to the eyes, but if ignored, it can be a pretty neutralized deal. It is kinda like offensive media. Just tune it out. Admittedly not easy to do in the area of The Strip, but a mere two blocks away, and your in any ol' Southwestern town for the most part.
And the people I get to see that come there, I sometimes don't get to see for an entire year until the next Interbike. In that sense Interbike is like going to a funeral. Not a fun place to go, but you get to see family you don't normally see. Sure, it shouldn't be that way, but that's how it seems to always work out.
At any rate, it's all about the people for me, and Vegas itself is just a nuisance that I have to put up with to see these folks. Still very worthwhile.
Warning! If you are easily offended, do not scroll down to see the next image! You've been warned!
I told ya to be careful.......... 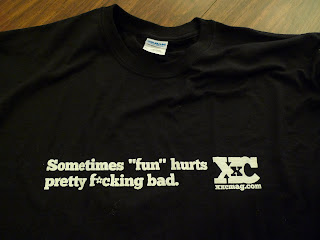 <===If you "get" this, your friends probably think you are one sick puppy!
xXc Mag, a webzine I highly recommend, is produced by Jason Mahokey. He of the cryptic Facebook postings. Well, he got ahold of me and wanted to know if I would sport the t-shirt you see here on the floor of Interbike. I said yes, and the wheels were put in motion to get that to happen. Unfortunately for both of us, the wheels we were relying on were those of the U.S.P.S.
Fail!
Oh well! I told Jason I would try to work this shirt into as many blog posts as I can. So get used to seeing it. I figure since this blog gets about as much traffic as the main drag in Wood, South Dakota, I will have to post it about 1467 times in the next month.
Just kidding!
But do look for this to pop up in some unusual places.
Posted by Guitar Ted at 9:46 PM