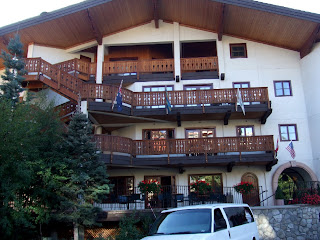 <===The Goldener Hirsh Inn: Spendy digs where Fisher shacked me up.

Well, I was certainly blessed over the past few days to be able to participate in the Fisher Bikes Press Camp. Held in the very beautiful Park City area of Utah, this camp was set up to let us media wonks know what was up on all the new FS 29"er stuff coming out for 2010.

I flew out of Cedar Rapids early Thursday and got out to Park City without much drama. After getting the "tour" of my room (s) from the staff at the Goldener, (yes.....an actual tour of my room , bathroom, and its features!) , I headed out to the reception at the outdoor deck of the Silver Lake Inn. First, I met the demo truck driver, Josh, who is Trek/Fisher Western states driver. Very cool dude and of course, very helpful. (Not as cool as "Paw Paw", but who could be that cool!) 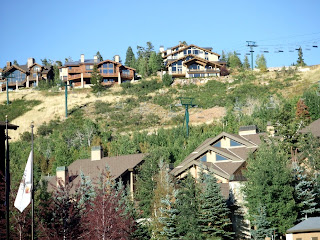 So, with the night's festivities wrapped up, I hit the hay and awoke the next morning for the provided for breakfast. After eating and meeting my fellow media cohorts, we were escorted to an upper room of the Silver Lake Inn for the morning's presentation. In attendance were some Fisher/Trek product engineers, marketing Brand manager, Travis Ott, Fisher Subaru Team members Jeremy Horgan-Kobelski, his wife, Heather Irminger, R&D honch/MTB Hall of Famer Travis Brown, and the man hisself- Gary Fisher. All were part of an excellent and informative morning of information gathering and story telling. 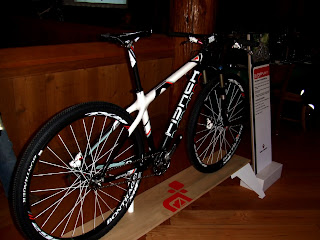 Some pretty cool bikes were on display up here as well. I got to see the National Championship rigs of Heather Irminger and JHK, the new Hi Fi line up, and a super cool single speed Superfly.

Oh yeah, and Jesse LaLonde was also in attendance rockin' a rigid Superfly SS out with us during the afternoon trail riding session. That guy is amazing. But even he, and all the athletes there, were totally cool and approachable. It was a pleasure to talk to each and every one of them. 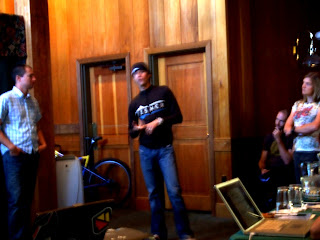 The first bike we rode was the Superfly 100. Awesome rig, and JHK says it will likely be replacing his hard tail for most events. That coming from an elite racer that loves hard tails....whoa! Anyway, I wasn't even in the same league as most of these folks or even the editors there, as I was sucking air for all it was worth, and dragging up the rear of the field. Oh well, its all good! Hey, a flat lander goes to 8100ft, and then up from there. Yeah.........not a surprising result! Anyway, I suffered like a dog, but had a blast doing it. 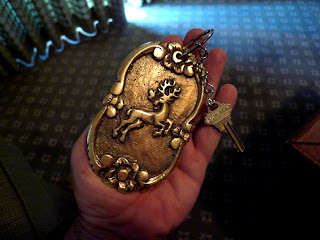 The end of the first day included an excellent trip to Park City proper for a dinner at the Wasatch Pub and Brewery Company. (Sorry folks! Only 3.2% beer here in Yoo-taw!) I had a great meal, and then we went back to sleep off the days effort.

Next morning brought another sweet breakfast spread. Then it was Rumblefish time, and I got to suffer the climbs in the thin mountain air once more. The Rumblefish was fun, and the Park City trails were awesome. Views? Are you kidding me? I got into a high alpine meadow that just blew me away with its beauty. Aspens groves, high mountain views, and old mining operations. Cool stuff for sure!

Then the afternoon approached and it was time to bug out of the SLC. I got into Chicago to make my connection back to Cedar Rapids when the weirdness set in. First, the airplane we were to take off in was nixed at the last minute due to a minor mechanical. We had to go to another jetway and wait for the ground crew to transfer the baggage and log books. An hour later we were ready to take off. After leaving O'Hare I thought we weren't gaining much altitude, and then the captain comes on the intercom with the following:

"This is your Captain speaking. Bad news folks. Our landing gear won't retract and we'll be returning to Chicago to land...."

Ummm.........okay....I guess. Well, I didn't freak too badly, but some folks were getting a bit unsettled. Anyway, the anxiety ratcheted up a few notches when we came back in sight of O'Hare and saw the runway lined with the flashing lights of emergency vehicles for the entire length of the air strip. Well, the landing went off without a hitch, thankfully.

But then we couldn't de-plane. The ground crews had all gone home, and no one was immediately available to drive the jetway. We had to wait for a guy from the maintenance garage to come out and get us set to get outta that tin tube!

Well, we were told after getting off that plane that we were going back to the original plane! It had been repaired, and in 45 more minutes we were to take off. That would be about 12:45 am. The plane was originally to have taken off at 9:40pm. Yeah......it was getting to be a long night! Anyway, the Captain was humorous, gracious, and very kind when he personally addressed the cabin after we got in the plane by explaining the entire situation to us. After that, everything was routine. I ended up getting home right at 3:00am Sunday morning.

So that was the big trip. All in all a very fun, informative, and exciting time. (I could have done with a little different excitement there at the end though!)

Next Sunday, I get to fly out to Vegas and do it all over again at Bootleg Canyon. Crazy!
Posted by Guitar Ted at 1:00 AM