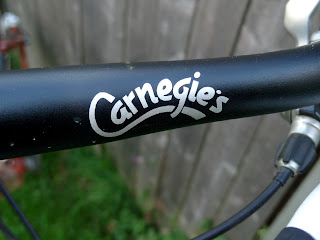 <====Named after a real bar in Taiwan

While I was gone I got a special delivery. A brand new bar from Ragley called the Carnegie's Bar. It'll all make sense here in a minute, just hold on....

You've heard of On One, that U.K. brand that did the Inbred steel 29"er, Carbon Superlight fork, and all those nutty handle bars with weird names like Midge, Mary, and so forth. Well, the mad scientist behind all of that is a guy by the name of Brant Richards. Brant likes sheds, or so it would seem, and I guess he got tired of doing On One stuff and started out on his own with a design company called Shed Fire. 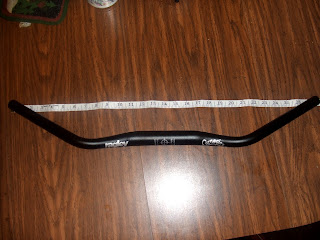 Width is 685mm tip to tip, but puts your hands effectively in the same
position as my old 700mm wide bar. Geometry is 25deg sweep with a 33mm forward
wiggle to keep the controls in the right sort of place. It nominally has a 38mm
rise, though this is lessened a bit when you angle the bar back and down for
comfort. 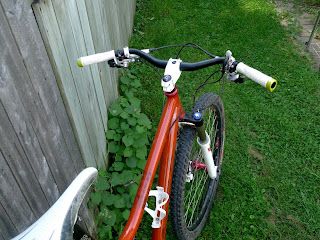 First impressions: 310 grams is a decent weight for a bar you can hammer on. Very comfy bend. A bit less than a FuBar, but otherwise these two bars are very similar in layout. I like the 31.8mm clamp for something like this because with as much back sweep as these types of bars have, you need a great grip on that bar with the stem. Bigger clamp diameter equals more clamping surface area which gives me peace of mind. Plus Brant tests the livin' daylights out of his stuff, so I don't have to worry. Good deal.

More later on this, but for now, that'll have to do. I have Interbike looming in the headlights right now, and plans are flyin' in between work, playing in the band, and writing. Lots going on here!
Posted by Guitar Ted at 1:00 AM