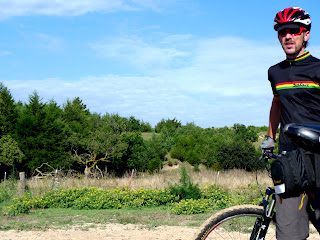 <===MG lookin' over the terrain at Potter's Pasture.

The Good Life Gravel Adventure was over, but my day was not. After hanging out at D Street for a couple of hours, MG showed up, we loaded up my car, and we headed out westward toward Brady, Nebraska. (A three hour tour!) I didn't drive very far when the tireds hit again. Even though Cornbread sent along an entire flat of Red Bull Cola, there wasn't anything that was going to stop my mind from randomly shutting down at different times during the trip.

MG took over the driving duties then, and he did a wonderful job too. (Thanks Bro!!) We got out there after trying to get gas at one point and finding out almost every gas station on the interstate closes at ten pm now. Crazy!

I suppose it was my lack of sleep combined with the Red Bull Cola that started the hallucinations, but every so often, I would snap into a completely clear vision of myself riding down a gravel road on my bicycle, then snap! Back to seeing lights on the interstate. All the while MG's i-Pod is blasting these cool tunes which I can totally recall every moment of. It was like a weird sound track to a psychedelic dream. 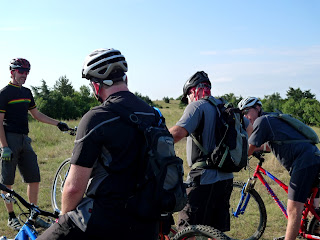 <===Taking a short breather at the end of a long climb to the top of a ridge.

When we arrived at Potter's Pasture, we found a simple barbed wire gate with two glow sticks attached to it. Yup, this was a sign for us. We went through the gate and found a fire lit with two fellows beside it. Kyle and Chad greeted us and chatted us up a bit. We then found out we had a fifth wheeled trailer to sleep in. I took the upper bed, and MG was on a lower bed. Paul, whom we hadn't met yet, and owned the trailer was already in the sack with his two toy poodles. I was out within seconds, and apparently snoring loudly. MG, well he doesn't cotton to us snorin' folk too well! So he bailed on the trailer and cashed out on a nearby picnic table top. 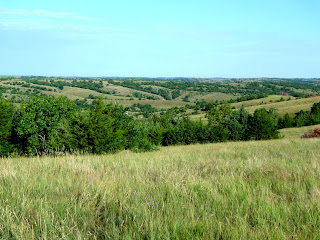 <===A view of Nebraska's "Big Country" from atop the ridge.

The next morning, Chad and Kyle were startled to find a bundle on top of the picnic table with MG ensconced like a caterpillar in a cocoon inside. I heard the conversation after he arose, and I felt something warm behind my left knee. Then I lifted my head and heard a tiny yelp and felt the pitter patter of little feet over my back. It seems the dogs took to me like a kid to candy. They wouldn't let me be, and seemed rather put out when I tried to shoo them away so I could dismount from the upper bed. Oh well! 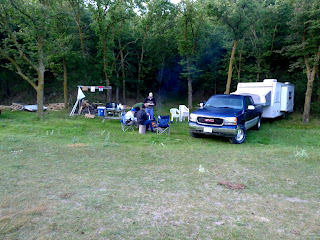 <===Our abode for the night and our hosts preparing breakfast.

Chad and Kyle had a big cast iron pan and were frying bacon over the open flame. Then some hash browns and scrambled eggs were added in. Yum! Good ballast for the belly after a long hard nights sleep!

After breakfast a couple more fellows showed up and we all kitted up for a ride on Potter's great trails. We were riding out of the camp and not more than 30 yards into the first climb I toppled over the edge of an exposed embankment and tumbled down with my Big Mama going cart wheeling after me. Quite a sight to start out the ride! After a good laugh, we all settled in to a great morning ride that lasted till about 11:30 am when MG and I had to skedaddle outta there to get me back to pick up my family in the Omaha area. Then I had to drive on to Waterloo, Iowa from there. 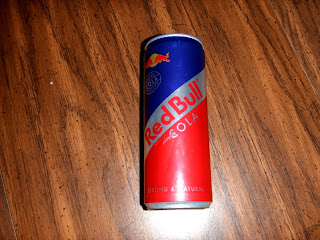 Lucky for us we had a steady supply of the Red Bull Cola on board for the long drive back. I got back to D Street without an issue with great conversation and music along the way. (Thanks MG!) I got MG all downloaded at the D Street, picked up my gravel grinder, said farewell to Cornbread and all, and hit the road for Bellevue.

I got my family out on the road by 5:30pm and we made it home by 10:30pm. What a long strange trip it was, indeed! I was beat, obviously, but what a great adventure! I was glad to have it all under my belt with no real issues at all, which is pretty amazing if you think about it.

Thanks: Thanks go out to MG, a great and accommodating traveling buddy. Kyle, Chad, Paul, and the rest of the Potter's Crew. You guys are ace! Can't wait to see you in October. Thanks to Cornbread and D Street for letting my Pofahl and some other stuff rot in a corner for awhile! Oh....and thanks for that Red Bull, Cornbread. It was a lifesaver! Thanks to our close family friends in Bellevue for taking care of my family. And a special shout out to Mrs. Guitar Ted and the children for lettin' me escape and do this goofy stuff. You are loved!
Posted by Guitar Ted at 1:00 AM