The Geezer Ride was conceived as a ride that would cater to the less intense rider, the rider that wasn't going to do a metric century gravel ride, but wanted to taste what it was like to be out there. It was made for conversations, stopping to "smell the roses", and most of all- to have some fun. Certainly there were some challenges along the way, and of course, B Maintenance roads!

I had done the planning and organizing for this at the insistence of a couple of friends, who ultimately had to back out of the ride for reasons beyond their control, but I am really happy, and more than that- satisfied- by what came of this day. I'll get to that later.....

I had gotten word a couple of days ahead of the ride that Robert, a local gravel/rando rider, was free to go and "would I like to drive down with him?" Plans were laid to leave at 6:30am to get to the meet-up point in Amana by 8:00am when the ride was to start. The trip was smooth, and as we approached the designated spot, I felt that we would be the first ones there and would be waiting to see the few riders that might show up roll in. I knew about a few commitments to come, but you know how that can go. I wasn't expecting more than six riders in total.

Well, imagine my surprise when I saw the little grassy lot lined with cars and cyclists buzzing about! There were ten there and one more would show up just as we were about to pull out to leave. 13 riders in all?!! I was flabbergasted.

Yes, it was called the Geezer Ride", and most of the assembled riders were qualified to bear that moniker. There were a few "youginz", and we even were graced by the attendance of Dee, the lone female to show up for the ride. She wasn't backing down from the challenge set to her by her friend, Ed, and that even though she had only been riding since April of this year and never had done a gravel ride. Well, that was pretty cool, I thought, and so we had a great group. Two were on fat bikes, just for good measure!

I led the assembled horde out on the bike path, which petered out on our side of the road, then picked back up on the opposite side. I got my wires crossed here and missed the road out of town that I wanted to take. I stopped and my bewildered mind had trouble reading the smart phone map I was looking at. Finally my brain turned on and we made a backtrack and were on our way......finally! Up a long, gentle climb by the golf course and back up to our first gravel road. There we had our first stop to gather up stragglers.

The first B Maintenance road was coming up soon, and I wanted to stop there to give a fair warning to those less experienced with these dirt roads. A trio of barking dogs came out from an adjacent farm and while they were barking vigorously, it was obvious that they were a bit befuddled at seeing thirteen cyclists in a bunch. We pulled out and started our dirt road descent, leaving the puzzled canines behind.

We gathered back up again at the top of the B Maintenance road climb, then it was a twisty, roller filled ride and descent down to our most Northwestern point on the loop. During the descent I was out front. Coming down a sweeping right hander I saw two hawks take fight from the right side of the ditch. The trailing one screams as I pass underneath. Then I take a left, get some speed up, and the next thing I know a bunch of turkeys run up out of the ditch on my left. One looks like it is on a collision course with my front wheel, but mercifully switches directions before impacting me. Thanks birdy! That would have been a nasty crash!

Not far East up the road from there was to be another stop, and one of the highlights, in my opinion, of the ride. Swedenborg Church. My hope was that the giant maples out in the church's lawn would be in their full Fall glory. I was not disappointed! 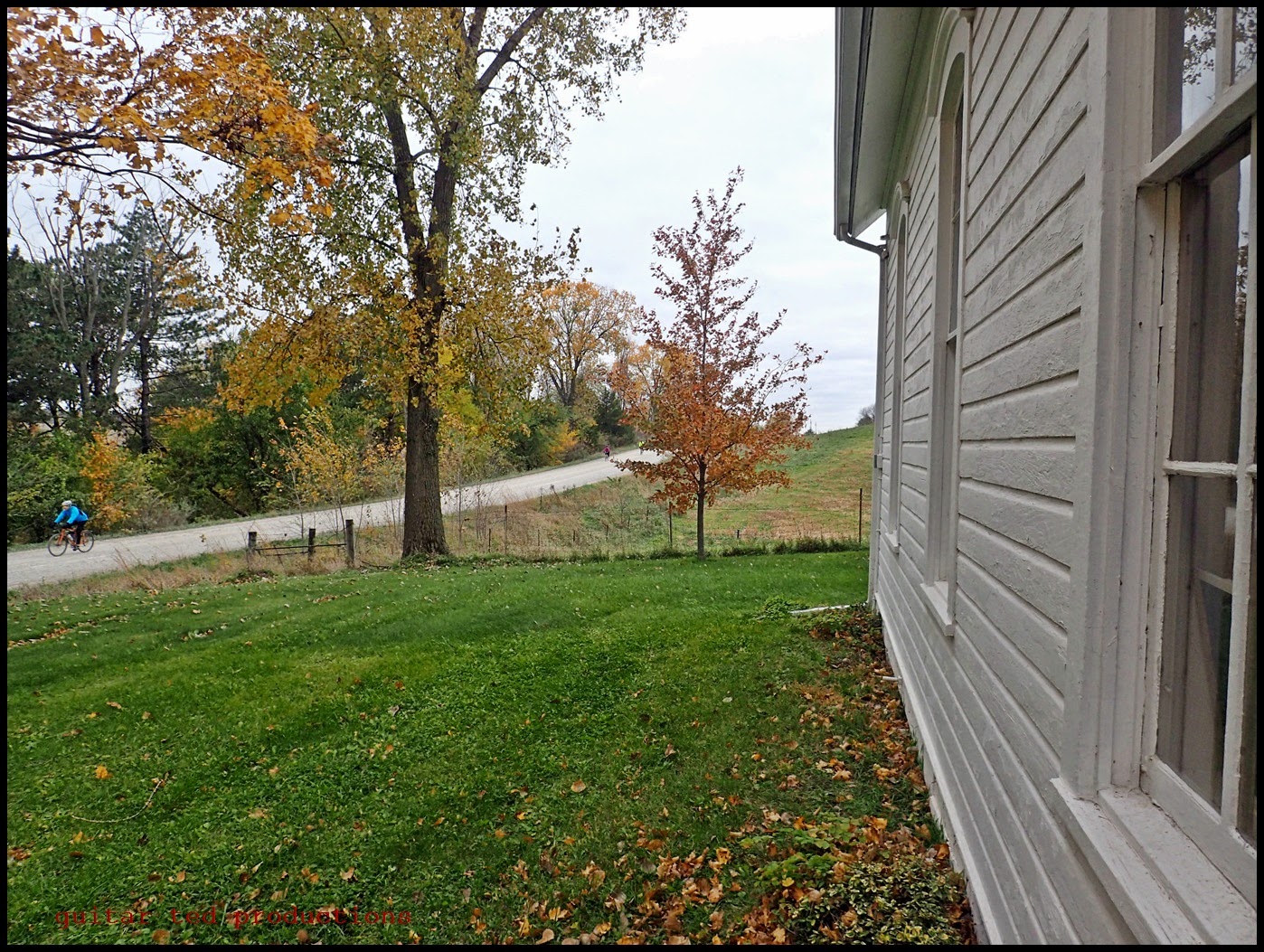 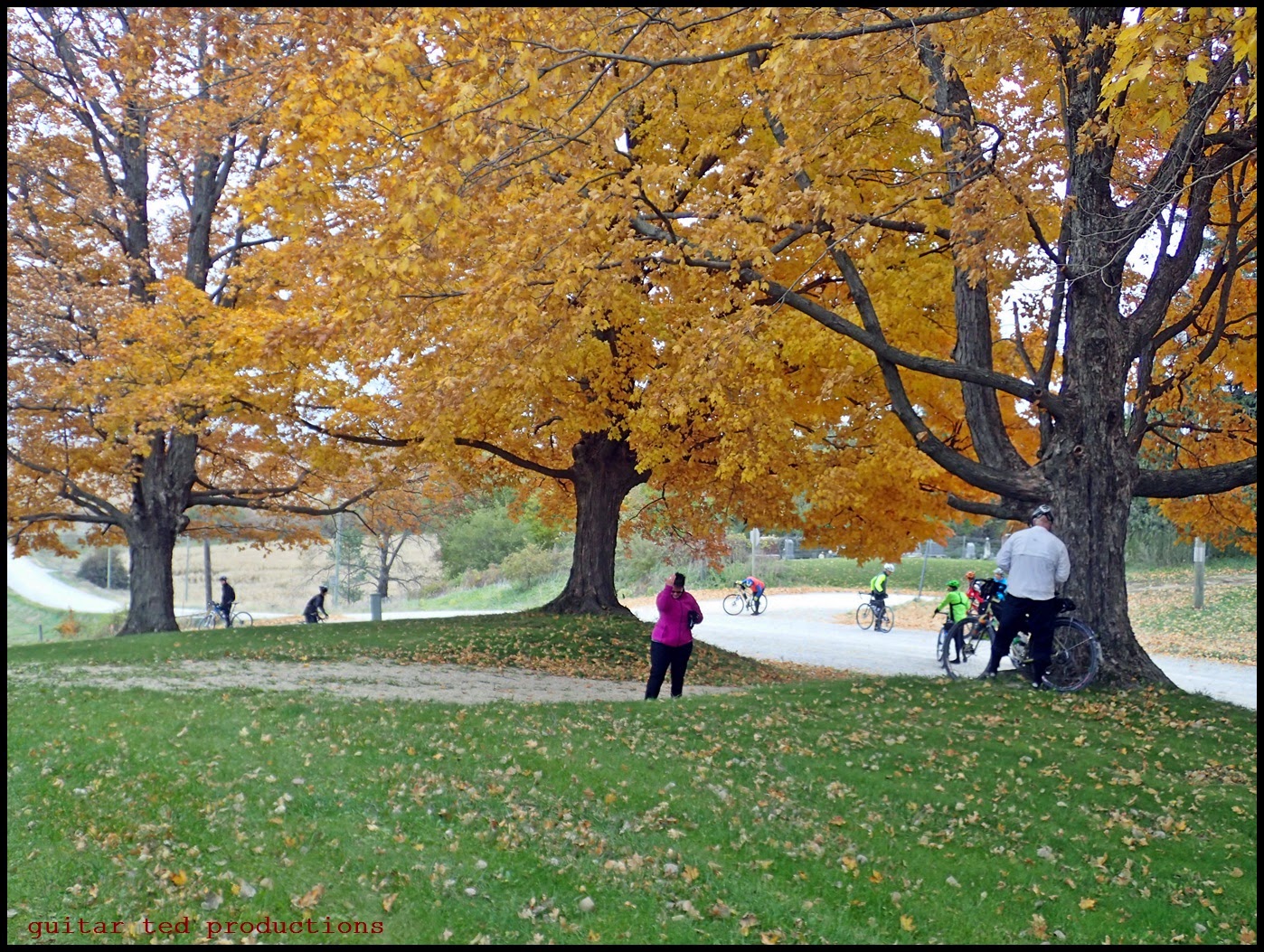 In a stroke of fortune, we discovered that there was a porta-jon around the backside of the church, which we made use of. After everyone was ready, we set off for the barren fields Eastward. At least the wind was mostly at our back. Our first mile was Northward, and it was here that a driver of a car behind us displayed their displeasure with us by revving their engine and speeding away. We all shook our heads and carried onward into the wind for the moment. A turn Eastward then gave us a decent tailwind and it was immediately beneficial.

This long, straight stretch was a bit of a let down after the constant sensory input of the twisty roads, hills, and spectacular Fall colors. We were pretty strung out along here. Finally some of the guys up front pulled up and waited on the rest at a point where the road went to chip seal. Hmm.......I found this odd. Apparently another mistake on the maps! Oh well, at least it was only a mile, and I figured it may be a nice respite for some of the lesser experienced "gravel-ists".

Then after the gathering up of riders again, we made a Southward turn into some rollers that featured short but steep ups. As the main bunch of us approached one of these, a Dodge Ram truck came over the top of the hill just in front of us at full song. Fishtailing and spewing dust and rocks, we estimated that it flew by us at 70mph! Whatever its speed, it was way too fast and we were fortunate that all of us were on the right side of the road going up that hill.

After this we arrived at our next left hander and gathering up all to see if we had all escaped the madness of that truck's passing, we rolled back into the pretty, winding gravel roads. It was a spectacular set of roads that led us down to the Iowa River Valley and our next stop to gather up the tribe again. 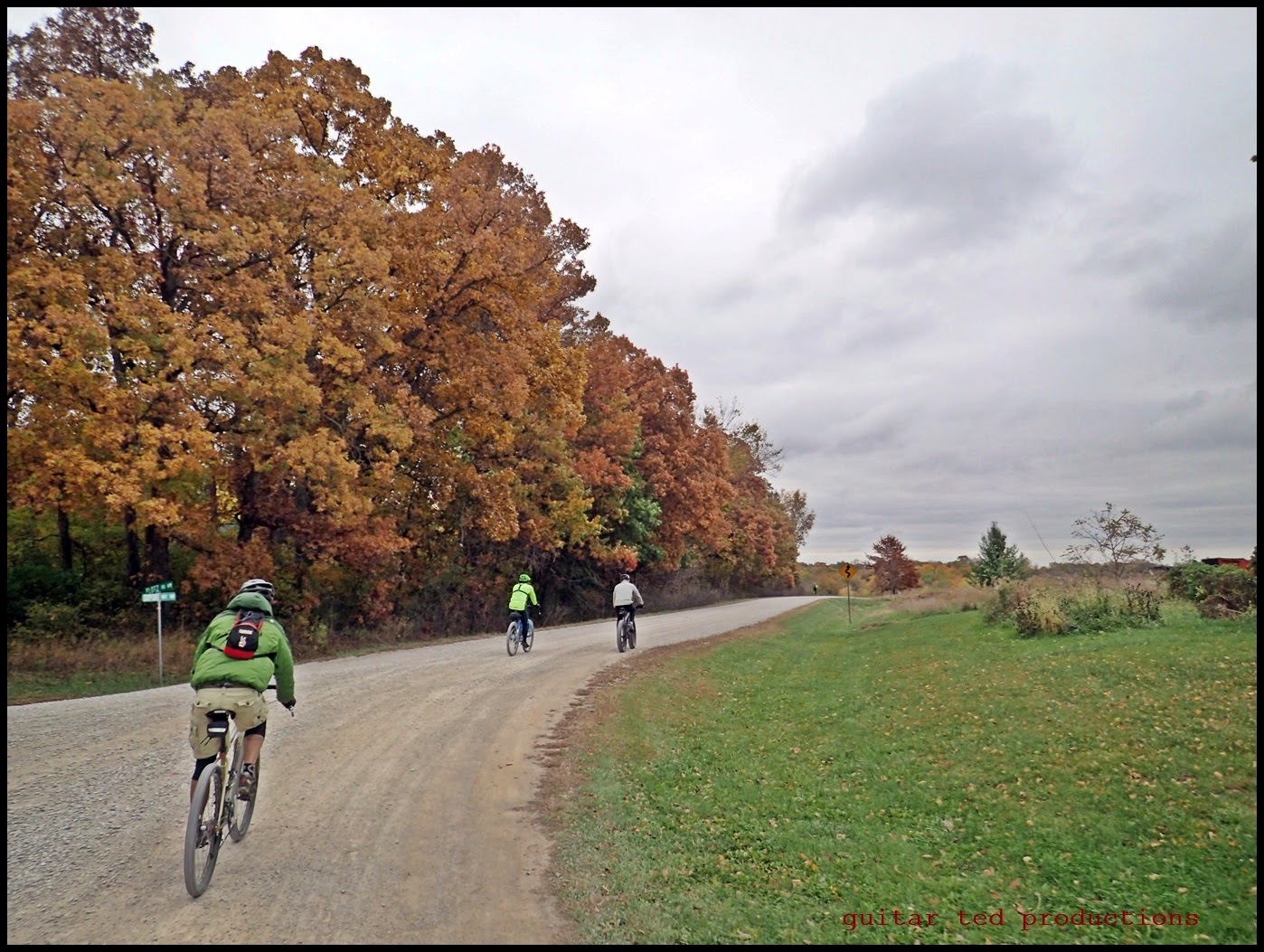 Here we waited and gave instruction as to the next bit of roads we would be taking. The plan was to go back up a bit to catch a B Road and then a gentle descent back into town. However; I offered the stragglers an option to take the road straight back to town if they chose to. They did not sound like they would bite on "Plan B", so we took off again to go up, over, and back down again.

We decided to stop to give some more directions to the riders strung out behind us, but only 10 of us showed up! Where did the other three go? We sent three riders back down the hill twice to look, but after twenty minutes, we figured they must have taken the short route back to town after all. This was troubling to me. I didn't like it at all.

We eventually all got back with about 37-ish miles in, well......all but the three missing riders! Where could they be? I was worrying more as the time went on. Meanwhile, gear was removed from tired bodies and bikes were racked up for transportation back home. Many thanks and hand shakes. A decision by Robert and I to go for some lunch was enjoined by Marty, who asked to follw along wherever we went.

The first stop was Millstream Brewing Company, where a good pitcher of "Backroad Stout" was consumed. Whilst we were relaxing outside the brewery, we suddenly saw a welcomed sight. The three missing riders appeared up the street and were riding straight towards us!

I was so relieved to see that they made it, and hear that they had not had any serious trouble. Apparently, they missed a turn, but somehow managed to ride most of the rest of the course and come in with a few "bonus miles". We asked them to join us and they sat and had a beverage and we laughed and chatted for awhile in the now bright light of the Sun under blue skies.

Eventually, Ed, Michael, and Dee took their leave of us and Marty, Robert, and I went to the Colony Inn and had a great family style German dinner. Pie and ice cream ended our dining experience there and eventually we all set off for home after what I would have to describe as a stellar day out on the bike with good people.

We were especially proud of our newest riding friend, Dee, who despite the hated hills made an end to the course successfully and now is well on her way to becoming "one of us". (<===HA!) Welcome to the "dark side", Dee! I hope you find many more miles of smiles on your bicycle wherever you decide to ride! Just keep on pedalin'!

THANKS: To all who showed up to this ride, thank you! I was blown away that you all came and some from hundreds of miles away. To Wally & George for the inspiration for, and naming of, The Geezer Ride. You were missed and you will come to ride this route someday! To Robert Fry for the ride to and from, the images, and the excellent company on this trip.

great photos - i didn't know zz top toured on gravel! sorry to miss your crew - we rode later on with the sunshine. it was a great day to be alive in iowa.

Looks like a great time was had by all. Nice pics! I really wish I could have been there!

The Geezer Ride was the most fun I'd had riding in quite a while. Thanks for opening my eyes to some really beautiful roads -- and they were all in my back yard!

What he ^^ said. I found much to enjoy on the ride; some from the land, but mostly from the great company. I'm sure I speak for the masses when I say I was honored to be part of the first Geezer and hope there can be many more to come