How To Choose Your First Fat Bike: What To Look For

When it comes to checking out what is available in fat bikes, things can get a bit overwhelming. There are different width tires, different "axle standards", and there are even front suspended and fully suspended models to choose from. There are steel frames, aluminum frames, and high zoot, carbon and titanium frames out there. What do you do?

Obviously, price can and will be a factor in your decision. Most folks are going to automatically exclude many choices immediately based upon prices. There are different choices to be made here and maybe some that are not fat bikes, so I am going to defer writing about this subject until my next post where I will discuss the various price points and choices within them. 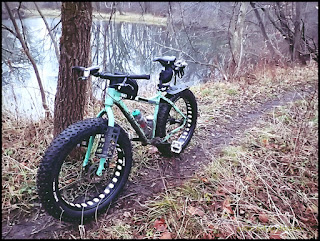 You might think, "But wait a minute! All these points sound just like what you might do if you were buying a mountain bike!", and you would be spot on. A fat bike is a mountain bike with fatter tires. It goes further afield than a mountain bike does though. Think about cycling on snowy, icy streets on your mountain bike. Sure, you could do it, but it is sketchy, hard, and ultimately is not fun. You could try riding through that sand, mud, or deeper loose rock, but you usually ride around that stuff. You could try that deer trail. You could try that beach. But you don't, because your mountain bike is not the best at that, and you'll end up walking more than riding. Well, welcome to the power of fat bikes! Those scenarios and more are why a fat bike really is the ultimate all-terrain bicycle.

That said, there are a few points to consider about fat bikes which may be a negative for some of you out there. Fat bikes are not for everyone, and the following may be reasons they are not going to work for you.
All right. Look for my next post on fat bike prices and what to look for coming up on Sunday.
Posted by Guitar Ted at 1:30 AM

This timely. I'm in Maine considering to live here through winter. I just started looking at the internet for suggestions on fat bikes. I've continuously traveled America by bicycle for no reason but to explore in a multitude of bicycles. I even spent the '13-'14 polar vortex winter bicycling Canada, W.NY, Ohio on a 520. Terrible idea. My current rig an 88 Panasonic Mountain Cat 4500 has its fork and stays full with Maxxis holy rollers 2.4. It's obvious I'm going to need something more then a hammock and Leatherman to stay rad here. I'm a "bushwacking, simplistic, oh look a 3' foot drop kinda guy". Previous rad rigs Barracuda A2M (great bike loved to be ridden hard, sucked at carrying gear) , Bridgestone MB3 (bland, but comfortable), 520 modified 26" wheel conversion, Performance M404. I'm looking at Ritchey Commando and Surly Moonlander. Are they too similar or different? Looking for the similar handling durability of the Panasonic.

@teamdarb: I think my upcoming post this weekend might start to help you sort this out. For now I will say that a Moonlander and a Ritchey Commando are very different rigs with some similar features.

Staying tuned in. I had a feeling the two were of different relms.

Will you also make a note on bottom bracket heights? which geo would be for overland versus prepared or mild trails?

@teamdarb: Keep in mind this series is geared towards those who are first time buyers and maybe don't have the level of "bike nerd" knowledge that many other riders do. I will get into some of the particulars,but things like bottom bracket height are minutia that is just lost on the majority of cyclists, so I hesitate to get that far down the rabbit hole.