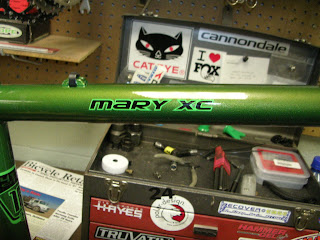 A nice shiny new rig with old drive train parts? Why do I feel a twinge of embarassment? Why shouldn't I just go ahead and use the parts bin spec? What has gotten ahold of me that is making me think I have to have the latest bits on this new frame, or I can not build it up?

It's sick, I tell you, just plain sick.

And we're not talking your downhilling, stunt riding kind of sick here, we're talking about a disgusting, insipid kind of mindset sick. The spirit of materialism has invaded my cranium, and I decided last night to give it an eviction notice.

You see, I was thinking just last night about when it was going to be that I would be able to ride that Haro Mary XC frame set I got a month ago. I'm thinking, "Gee, that SRAM X-9 stuff is sure nice, and I could get that new saddle I saw, and........." STOP!! Something clicked into gear right then. A sticky old pawl finally worked it's way loose again and dropped into engagement with a free wheeling ring gear. A thought took into view and I realized I was standing right on top of enough drive train parts to build several bikes. Nice parts.

Sure, they were parts that had become outdated, or "surpassed" (supposedly) by some new fangled this-or-that. These parts were still great, serviceable, light, and in some cases better than anything out there today. I ran down into the parts bin dungeon and began rummaging through stuff. Wow! I didn't even know I had this stuff! Well, I did, but I had forgotten..........or had been blinded to it. Which it was, I'm not sure, but I am going to use some of that stuff, and it may not be "cool", but it's gonna work!

Besides, I'll be riding that bike sooner than later, and what good is it to have that stuff if I am not going to use it, ya know?

So, while I'll have several new, shiny and cool bits on the bike, (mostly by the kindness of bike industry peeps. I'll let you all in on it when the bike comes together) I'll also have some "oldy but goody" stuff aboard that'll probably make you shake your head...............

I'm free from that spirit that haunted me, at least for now!