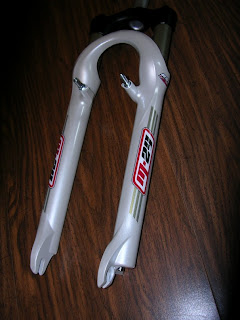 Hey ya'all! It's the weekend already! Didn't we just have a weekend? (I get thrown outta whack by this mid-week holiday stuff!)

Anyway...............here's a shot of that RST fork that didn't make the Twenty Nine Inches story. It's the new M-29 air shock with 80mm travel. So far I've got it mounted up to my Dos, but I had to order a part. A disc mount to be precise. You see, everything fork-wise from here on out is going 74mm post mount, so I had to invest in the proper Avid mount to get me up and rolling. Well, not rolling just yet! The part is on order. I'll be really rolling it by this time next week.

In other news, Specialized's newest 29"er offering that I linked to yesterday is getting mixed reviews from a looks standpoint. I don't like the way it looks, personally, but hey! Maybe it performs just fine. If so, cool! I just don't think it's going to add up to a bike that will rip Mid West single track. I'm hoping the Big Red "S" has some of these at Interbike to test ride so I can check it out for myself and see if I'm wrong.

The Guitar Ted Death Ride Invitational has been moved to Saturday, August 4th. If you can not make the new date, I appologize, but since it is my ride I thought it might be important for me to actually be there! The previously mentioned date was already committed to something else that I had mistakenly thought was on a different day. Whoops! My bad!

Anyway, this gives me time to get the Pofahl Custom together to ride and also gives myself and my "route finder extrordinaire" Wuzbeen, a chance to get a handle on the route. It's been a challenge so far what with all the flooding. Roads under water and whole bridges washed away! We hope to have a finalized route by next week.

Camping option: We are putting out the chance for a group rate at a local to the ride campground. We could get a rate of $25.00 if we see enough interest. That would cover us for one night, as I understand it. There is an e-mail link under the "My Events" column at the right here where you can contact me if you are interested in this option.

Well, I pretty much negated any reason for you to click on the Guitar Ted Death Ride Invitational site, but do it anyway so you can see Mr. 24's cool banner he did up for me!

By the way, anybody spot the FJ Cruiser yet?

Ride yer bikes this weekend and have some fun already!