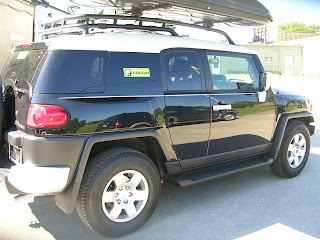 I was recently able to catch Mr. 24 in one of his increasingly rare appearances in the Cedar Valley. He's finally gotten the new wheels and it's pretty sweet.

Here you can see the tiny Ergon decal on the rear "C" pillar. (Body shop talk) Anyway, I suspect this to not last too long since the original plan was for an Ergon wrap job, ala NASCAR.

I've a feeling Mr. 24 would assume leave it in this state which is predominantly in the colors of The Kerkove Nation. (read: black!) 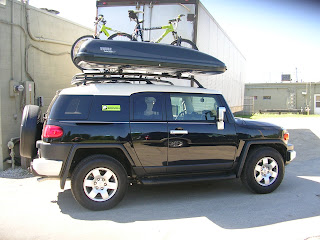 Here's the rig fully loaded. I don't think it'll pass through the overheads at the drive through there buddy!

If you happen to see this giant black rig festooned with bikes and boxes coming down the highway at you, never fear! It's just ol' Jeff. Give him a honk and a wave. If you see him at an event, say howdy for me, won'tcha?

He doesn't get around these parts much anymore.

Can't say I blame him either!
Posted by Guitar Ted at 6:19 PM