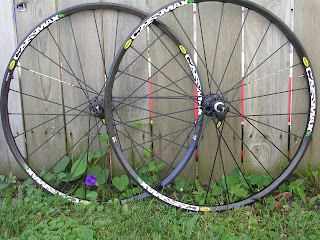 Friday I recieved these Mavic Crossmax wheels to review for Twenty Nine Inches and they are yet another example of how the walls between 26 and 29 inch wheels are being torn down.

Just a few years ago even a 29"er specific rim was a dream, and now we have several. Not only that, but the prized tubeless moniker can now be associated with 29 inch wheels. Add these Mavic hoops to the already excellent Bontrager Race Lite Tubeless Ready wheels and the Bontrager Rhythm model line of 29"er tubeless wheels.

Now all we need are more tubeless ready tires! I know that Bontrager is working on getting a complete line out as soon as possible. Hutchinson's Python is currently the only "Mavic approved" choice for their wheels. I suspect that by Interbike the tire selection will be adding numbers rather quickly!

In Other News: I was able to get out on a couple of short, low intensity rides this weekend. The knee is doing much, much better. I think regular trail thrashing will commence once again this coming weekend.

I was able to take a "farewell" cruise on my Haro Mary which has been sold to a lucky and entusiastic new owner. I needed to come up with some cash to fund the completion of a couple bike projects going on here. I also need to plan ahead for the coming "slow season". Yes, as amazing as that sounds, I know it's just a short time until business slows down, school starts again, and "The Man" decides I don't need to be there as much at work. Gotta plan ahead!

Speaking of planning ahead: The plans for GTDRI are still being worked on. It looks as though the course is coming along. No real road re-routes need be done. We have a campground group rate possibility, and even a pre-ride breakfast at a local cafe' is being contemplated. Check the site for more updates in the coming days. Remember that the date is August 4th and not what the header says. (Mr 24 lost the artwork and can not change it!)

Blood on the Rocks! Mr. 24 became "Mr 6" for the weekend and left a sacrifice of blood on the trail to garner a first place bit o hardware at Blue Mound this past weekend. Check out the story. Crazy!

And Finally..... I was cruising the web and came across this cool report on the Big Wheeled Ballyhoo that happened two weeks ago in Decorah, Iowa. Check out the dude in the running shorts. (Yes, he rode that way and yes, that's Everclear in his flask) If you missed this years edition the good news for you is that we are putting it on again next year. Make sure you keep the last weekend in June free. Read the report and you'll get a small slice of just what it was all about.