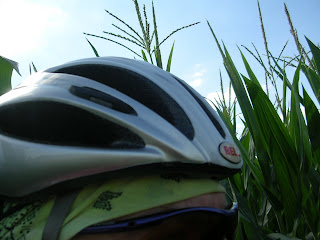 I wouldn't normally put in anything on this blog about corn. I'm surrounded by it every year and quite frankly, it's a thing taken for granted here in Iowa. However; something remarkable has been happening here, so I thought I'd mention it.

I went out for my traditional 4th of July ride, a gravel grinder, and I noticed how tall some of the corn was already. My Grandfather and his peers always used to say about the early corn crop a saying that goes like this: "Knee high by the 4th of July". That meant that if the corn was at least that high by the fourth of July, the crop was thought to be coming along quite nicely. Well, that saying has been blown out of the water in modern times. Now if it's not man high by the fourth of July it's a poor planting! 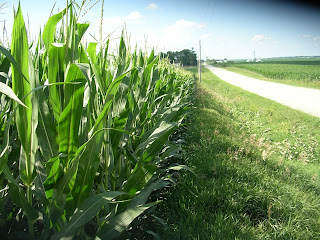 The thing that caught my eye was that this field that I have pictured here has tassles on the tops already! That means that by the end of July this field might already have ears and be "drying down" already! Yikes! That usually doesn't happen, (tassles on the corn) until the end of this month. I also noticed a lot of wild flowers are about a month ahead of schedule too. Does this mean I'll be riding in the snow in October? Crazy!


Then there was my little episode stepping down into the ditch to get into that corn field I photographed. I stepped out thinking the ditch was shallow, but it wasn't. So, where I thought my foot would hit solid ground was actually about a foot off an off camber slope. My full weight came down at that awkward angle and I felt a searing pain in my knee. Really bad! I had to cut my ride short and I went home and iced it down and hit the old ibuprofen right away. I'm not sure, but I think I tore a connective ligament to the bottom of my patella a bit. It still hurts this morning, but the swelling is down and I can at least walk without a limp.

What I won't do to get a photograph! Ha ha! Oh well, I just hope it heals up soon. I've got alot of riding to do.
Posted by Guitar Ted at 6:02 AM