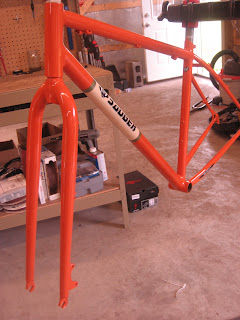 The former Secret Project #1 is about ready to be shipped out to the Guitar Ted Labratories for build up. Right now, there is going to be some borrowing of parts from a couple of other things around here just to get this up and running. Eventually, all the parts will be replaced with new or dedicated parts so the borrowed parts can be put back on the bikes they came from.

The eventual plan is to have a mainly silver colored parts build. Thanks to dp for the Thompson post and stem to get me started! I have this designed to be a drop bar bike and geared, so there will be some interesting things going on with the shifters and brakes. You'll have to wait to find out, but it'll be cool. In the short term, a "funky bar" will probably be fitted to this to get me going.

Update on "The Creak": You might remember the post from last week regarding the noises eminating from one of my bikes? Well, I found it! It wasn't what I thought it was, and it wasn't any of your suggestions either. The creak was strange in that I found that I could get it to make the noise without my feet on the cranks. This eliminated the crank/bottom bracket area in my mind, so my idea was out of the window! I finally tried to flex different parts of the bike while the bike was still. This led me to the rear wheel and eventually the rear skewer. It was an aluminum ended skewer! I replaced it with a skewer that had a steel interface. Voila'! Noise gone! I'm sooooooo happy!

Iowa Promotes Cycling With License Plates: If you live here in Iowa, you now can get a special "Share the Road" plate. It's being promoted to help raise cycling awareness in the state, but they need to get at least 500 sold to get the go ahead to produce them. You can find out more by checking out this.

Guitar Ted Death Ride Invitational: It's this Saturday and we look to have a great, albeit hot, day of riding. So far the group looks pretty small, but whomever shows up will be sure to have some awesome gravel goodness and cool folks to share it with. We'll be kicking it all off with a breakfast, (optional) at Doose's Cafe' in downtown Marengo at 6:00am with the riding to follow at 7:00 am. Of course, there will be a report and pics come Monday, so if you can't make it, look for that. Haven't heard of this before? Then check it out here.