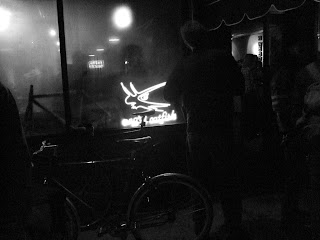 Saturday evening, a new bicycle shop called the "Angry Catfish" was throwing a party in conjunction with a few local custom builders and Twin Six, the apparel company that puts duds on my back from time to time. (Thanks guys!)


Anyway, I went there with Jason B, Marty, and Ben. We hung around from the early part of the evening till about 11pm. I took the opportunity to snap off a few black and whites with my Fuji Finepix Z-1 point and shoot. Nothing spectacular, but it gets some cool images sometimes.
I like the first one here. It reminds me of when bars were all smoke ridden pits due to the foggy nature of the front window. (Of course, no one was smoking inside.) I was outside when I took that one. I like the shadowed, ghostly human forms and the highlights of the bicycle. 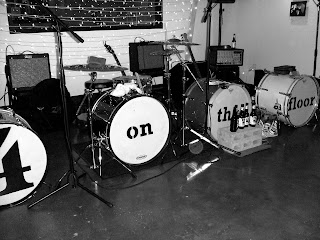 The band was a unique outfit called 4 On The Floor where each band member could kick his own bass drum. The minimal equipment otherwise hearkens  back to the days of early rock and roll. I thought it was pretty cool.


We got there pretty early, so the place was wide open. Lots of conversations could be had, since the band wasn't playing. When they did, you could hardly hear yourself think. 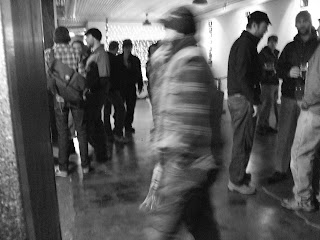 Pretty amazing party since food, drink, and entertainment were all free. How often does that happen anymore? 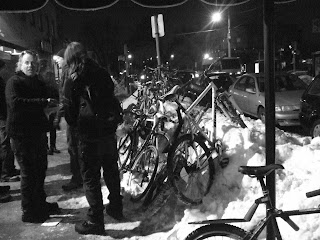 By the time we left there was a big contingent of folks on bicycles milling around out front. Fixies and single speeds were the order of the evening. Kind of funny how nowadays there are mini-gatherings outside of bars so people can get their smoke on. Back when I was young, being outside was a lonely proposition.

Not anymore, it seems!

That's a wrap on the Cutter's Ball at The Angry Catfish bicycle shop/coffee bar. More Bike Shop Tales next week!
Posted by Guitar Ted at 1:00 AM